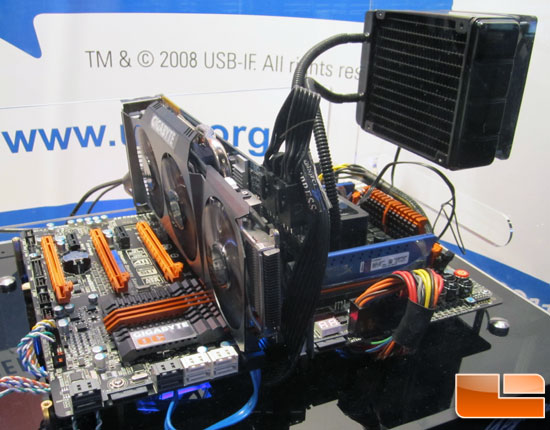 GIGABYTE had the GA-X79-UD7 set up for a demonstration running one of the new Intel Sandy Bridge-E processors. 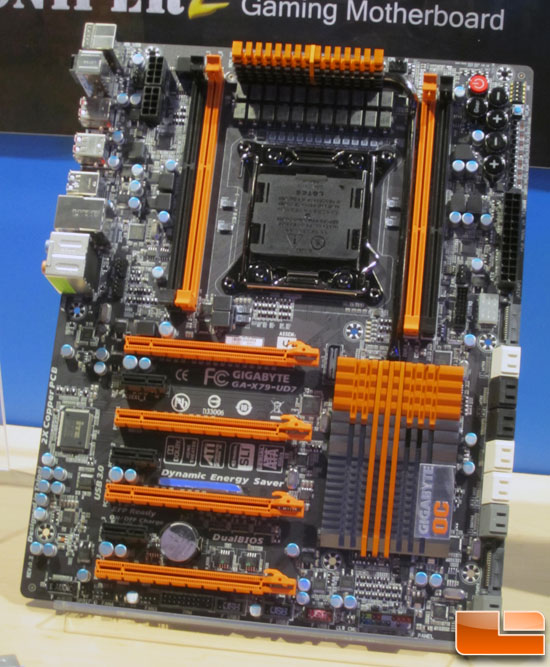 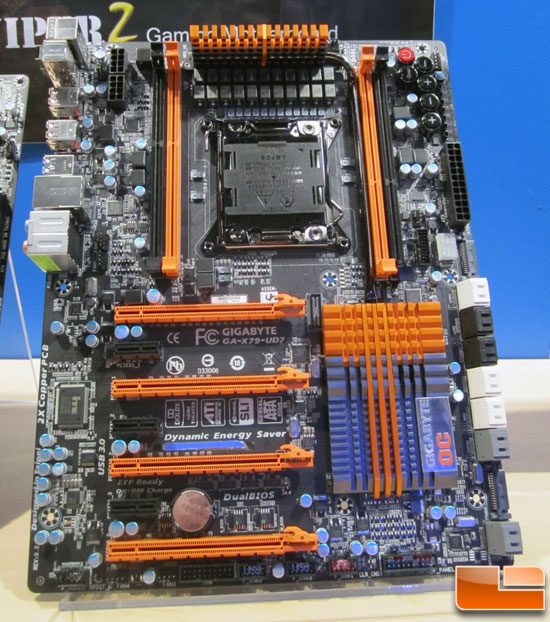 In the upper right hand corner of the GIGABYTE GA-X79-UD7 we have a series of onboard buttons. Two of which are the onboard power and reset, the remaining four are used for overclocking. If I were to speculate a guess, one to adjust the Bclk, and one to adjust the multiplier. After all the Intel X79 chipset is designed for the second generation of Intel Core processor “Extreme Editions”. 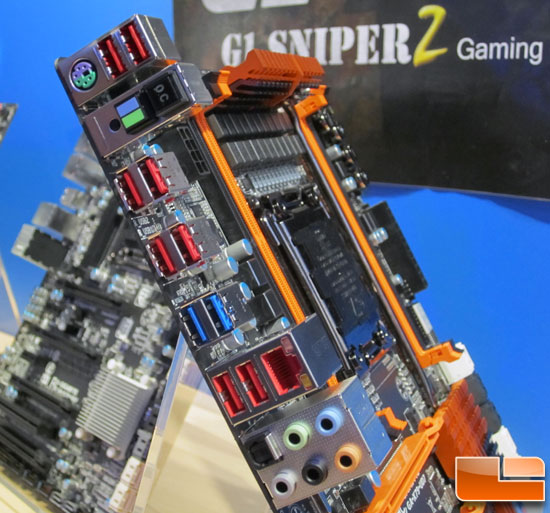 The I/O panel of the GIGABYTE GA-X79-UD7 has the same features we saw on the GA-X79-UD5, including the blue/green button to toggle us between BIOS chips. We also have an OC button on the I/O panel for on the fly overclocking. The GIGABYTE G1.SNIPER2 we looked at earlier today had this and it worked pretty well for an on the fly overclock. It brought Intel Core i5 2500k from 3.3GHz to 4.1GHz. Looking forward to seeing what it will do with the “Extreme Edition” processors. 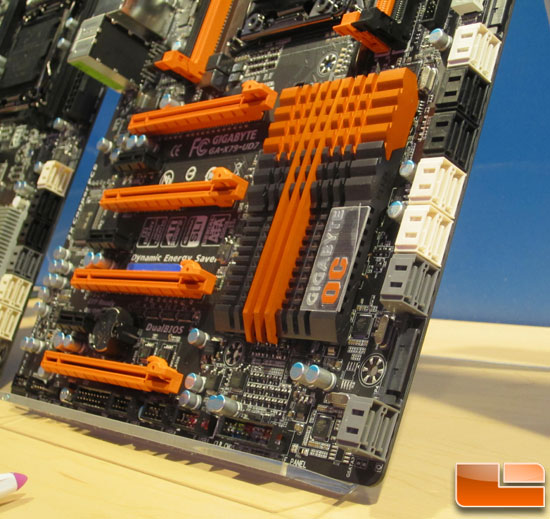 Taking a closer look at the 10 SATA ports on the GIGABYTE GA-X79-UD7 we can see what looks like a SATA power plug on the UD7. We first saw this on the GIGABYTE X58A-OC, rumor has it that it is easier to keep condensation out of when using extreme cooling like Liquid Nitrogen. 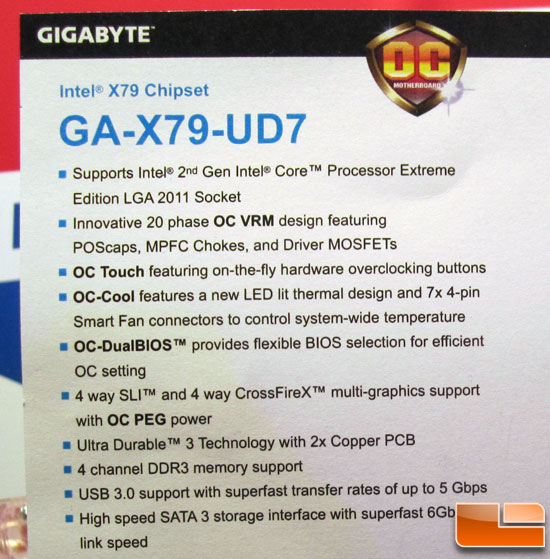 Many of the specifications of the GA-X79-UD7 are the same that we have seen so far today. All of the boards feature the Ultra Durable 3 technology with 2x Copper PCB, SuperSpeed USB 3.0, and SATA III 6Gbps. Beyond those features the GA-X79-UD7 steps it up. Compared to the 12 Phase VRM design of the UD5, the 20 Phase OC VRM design is extreme, I suppose that is fitting for the top board in the GIGABYTE line up. As we saw above the GA-X79-UD7 features OC Touch, an on the fly hardware overclocking solution. If heat is a concern, the GIGABYTE GA-X79-UD7 features seven 4-pin Smart Fan connectors to control temperatures system wide! 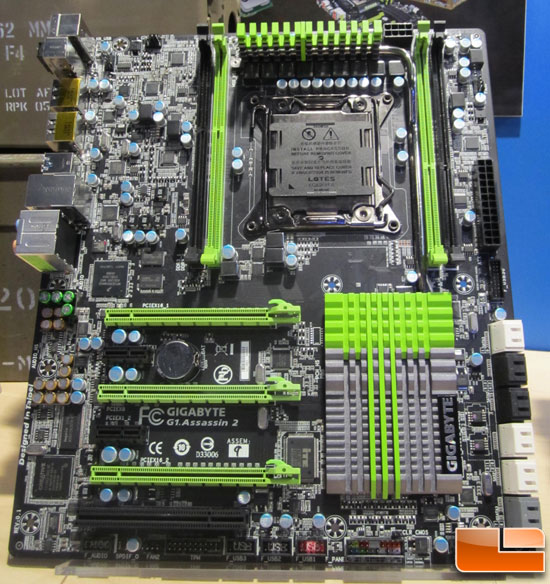 Now we can delve into the gaming series of motherboards by GIGABYTE, the G1 Killer motherboards. We first saw the G1 Killer series at CES 2011 when they release the Intel X58 revisions of the G1.Killers. We just took a look at the second coming of the G1 Killers when we put the GIGABYTE G1.SNIPER2 through the paces this morning. It proved to be a great board. Now we have a quick look at the third revision of the G1 Killer series of motherboards. The G1.Assassin 2. Holding true to the line, the G1.ASSASSIN features the Bigfoot Networks Killer E2100 Gigabit network card and the Creative 8 channel audio. The Creative HD audio features 108dB SNR (Signal-to-Noise ratio), X-Fi, and EAX 5.0 technologies. The capacitors used in the audio technology are Nichicon MUSE Audio Capacitors. Only thing missing on the G1.Assassin 2 is the AR-15 magazine on the chipset! Hopefully GIGABYTE will put that into the final product, if not, it just wont be the same as it’s predecessors!

The I/O panel once again features the typical features found across our boards today. We have 8 USB ports, two of which are SuperSpeed USB 3.0, a pair of eSATA ports, BIOS selection switch, PS/2 port, optical SPDIF out, and five audio jacks. 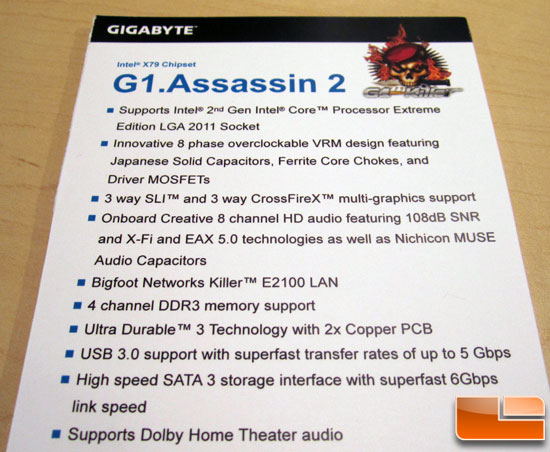 The Specifications on the G1.Assassin 2 feature an 8 phase overclockable VRM design using Japanese Solid Capacitors, Ferrite Core Chokes and Driver MOSFETs. The G1. Assassin 2 will support 3 way SLI and 3 way CrossFireX multi-GPU solutions. Like all of the GIGABYTE X79 motherboards we have support for quad channel memory.

All in all, GIGABYTE is starting off with a strong line up of Intel X79 motherboards. We have the entry level GIGABYTE GA-X79-UD3, middle of the road GA-X79-UD5, and the top of the line GA-X79-UD7 for un-comprimised performance. If your looking for the top gaming motherboard, the G1.Assassin 2 has you covered with the discrete level sound card and network card already integrated in! No matter which board you decide on, you have the reliability and performance GIGABYTE is known for. Once we start getting the X79 motherboards in to test, we will be sure to put them through the ringer and see how they perform!