To wrap up our coverage of the 2009 Intel Developer Forum we are going to bring you coverage on a number of companies who had products that stood out to us over all the rest. If you’ve heard about Super Talent’s TeraByte PCIe RAIDDrive SSD, Intel’s 7 SSD PCIe card, Kington’s dozen SSDNow powered demo system, Marvell’s SATA 6G storage controller, Lucid’s Hydra 200 multi-GPU technology or SuperSpeed USB 3.0 then you are in for a real treat today.

We bumped into one of our friends over at Super Talent who was more than happy to show off their recently announced TeraByte PCIe RAIDDrive SSD! This storage device uses the latest in SSD architecture to break the storage performance bottleneck with sequential transfer speeds up to 1.4GB/sec. This is made possible since it uses the PCI Express bus rather than the older and slower SATA bus. 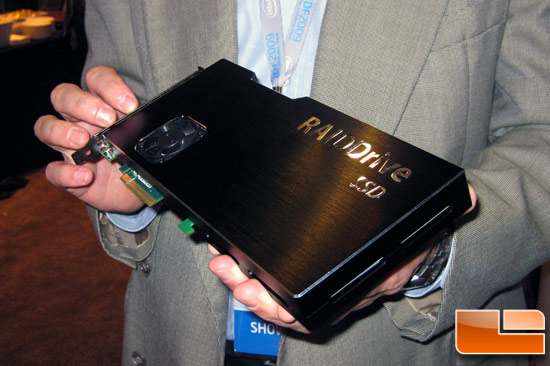 The RAIDDrives connect through a PCIe Gen. 2.0 x8 interface and is fairly large as you can see from the image above. The 1TB RAIDDrive is essentially four UltraDrive SSDs on one PCB that operated on the PCI Express interface, which is insane. OEM pricing for the 1TB RAIDDrive GS is $4999, so if you want to get the best SSD performance available today you are going to have to pay for it. 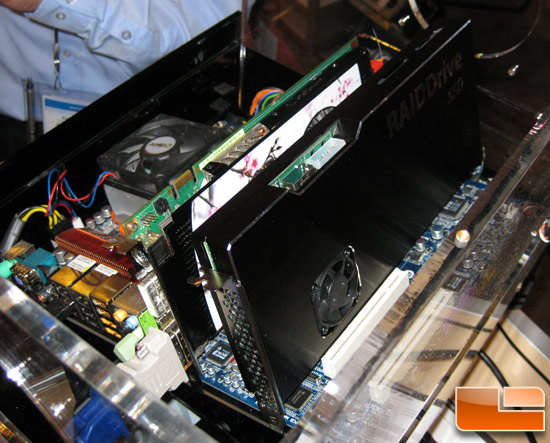 When we first heard about the Super Talent RAIDDrive we figured that it required external power since it had a 4-pin molex connector on top of the card, but it appears not to be needed as Super Talent wasn’t using in on their demo system. Speaking about test systems do you notice anything interesting about the one Super Talent was using? 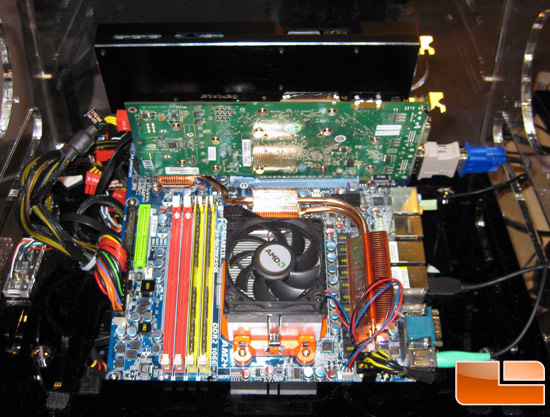 If you caught the fact that it is an AMD system you are a winner! Super Talent brought a socket AM3 platform to the Intel Developer Forum to show off their products?  **GASP** 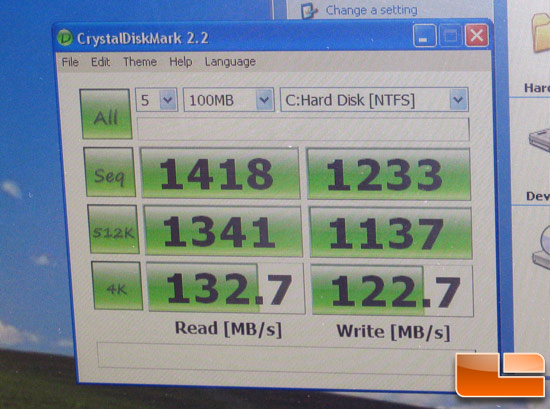 We had to run a benchmark before we left, so Super Talent allowed us to run CrystalDiskMark 2.2 and the results were nothing short of amazing.  The sequential read transfer speed was over 1.4GB/sec! Even the sequential write transfer speeds was over 1.2GB/sec.  The Super Talent 1TB RAIDDrive GS is incredibly fast SSD! How many people will be willing to hand over $4999 to have one though remains unknown, but someone certainly will.  What other drive will give you 4K random writes of over 120MB/sec? Amazing…

If you were impressed by Super Talent’s PCIe SSD then you are going to be blown away by what Intel has cooked up.

Intel has managed to put seven of their SSDs on a single card! We had the chance to speak to an Intel
fellow who told us that the card is able to reach 1.076 million IOPS (input/output operations per second). Intel is claiming that to get this level of performance from magnetic drives, you would need over 5,000 of them. In terms of bandwidth numbers that we would understand, this would be around four gigabytes per second of storage bandwidth.
This is equivalent to nearly 5,000 disk drives worth of random read/write performance and you can fit this in your hands.  Try doing that with 5,000 disk drives! SSDs are clearly going to be the storage drive of the future and this is one example of the way they might be headed!