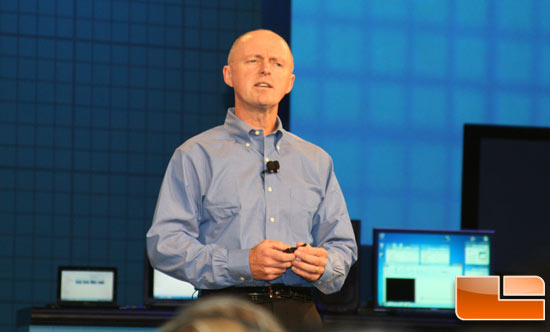 Sean Maloney, executive vice president and co-general manager of Intel Corporation’s Intel Architecture Group (IAG), was on stage and kicked off IDF 2009 by giving the audience an overview of this year’s show. He then handed things over to Paul Otellini who got right to the good stuff! 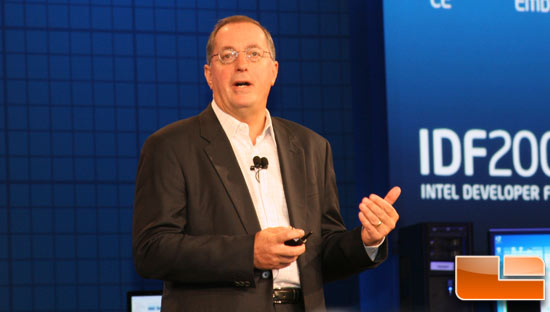 Intel President and CEO Paul Otellini was the main speaker for this morning’s keynote and spoke about the state of Intel and the direction that the company was headed. He also mentioned that Intel is focusing on the technology continuum. By this he was meaning that Intel has already started to shift its focus from technology for the personal computer to other devices like netbooks, mobile phones, mobile Internet device, in-vehicle infotainment and other areas that are only being dreamed of today. He also said that PC sales are flat, which is a great sign as we are in the worst economic situation in 70 years.  By this he means that the PC has become an indispensable item that we can’t live without. 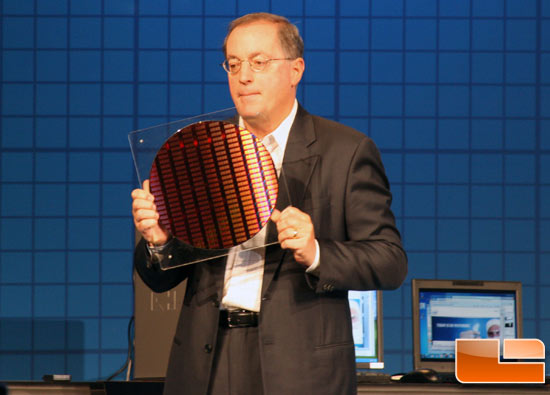 He also displayed a 300mm silicon wafer containing the world’s first working chips built on 22nm process technology. The 22nm test circuits include both SRAM memory as well as logic circuits to be used in future Intel microprocessors. The 22nm wafer displayed by Otellini is made up of individual die containing 364 million bits of SRAM memory and has more than 2.9 billion transistors packed into an area the size of a fingernail. The chips contain the smallest SRAM cell used in working circuits ever reported at .092 square microns. The devices rely on a third-generation high-k metal gate transistor technology for improved performance and lower leakage power. 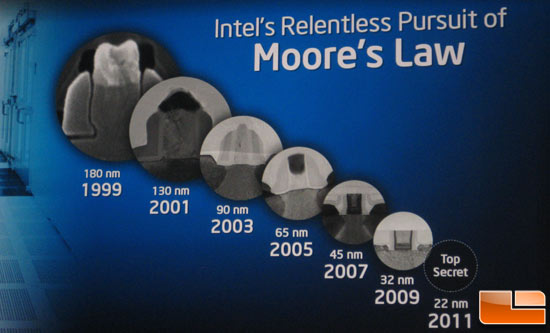 Moore’s Law also seems to be alive and doing well as Paul Otellini said that Intel has begun production of the world’s first 32nm Westmere’ microprocessor, which is also the first high-performance processor to integrate graphics with the CPU. At the same time, Intel has already moved ahead with development of their 22nm manufacturing technology and has built working chips that will pave the way for production of still more powerful and more capable processors. 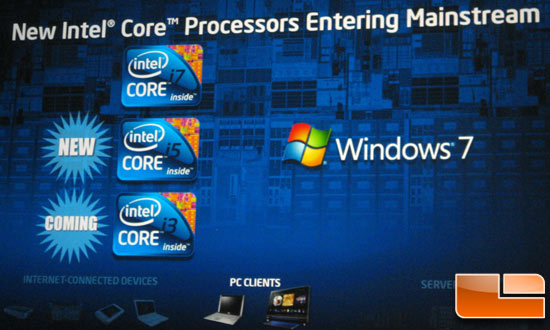 Intel also announced that Intel Core i3 processors will be coming in Q4, 2010 and that they will be based on 32nm Westmere technology. This will complete the Intel Core i series, which will be a huge milestone for the chip giant. 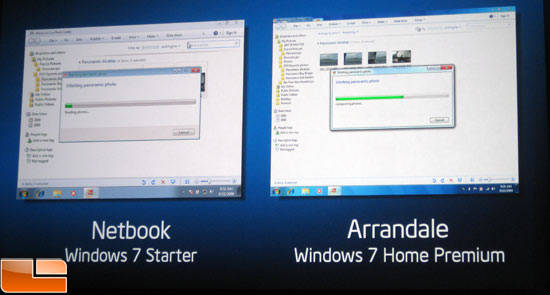 Intel also ran a demo on notebook that was running the Arrandale 32nm processor! The Intel Core i5-5xx series of mobile processors are code named Arrandale and based on the 32 nm Westmere shrink of the Nehalem microarchitecture. Arrandale processors have integrated graphics capability but only two processor cores. Their release is expected in Q1 2010 like we already mentioned. Intel showed off a quick benchmark using Arrandale versus a current Intel Atom powered netbook and the results showed that Arrandale was the winner by a long shot.