Every year during IDF you can rest assured the Advanced Micro Devices (AMD) gang is close by with their own private technology showcase that is housed at a local hotel. Gone are the days of AMD limo’s waiting to pick up press directly in front of the show, but that doesn’t mean they have no presence at the show. I had a chance to sit down with Pat Moorhead, AMD’s vice president of advanced marketing, and a number of AMD executives this week and had a chance to go over what AMD is planning in the months ahead. AMD is still going ahead with GPG Stream Computing and heavily pushing the fact they offer the whole platform and no other company does (for now). They also had a number of demo systems on display to show off various AMD strong points on both desktop and notebook platforms.

The most interesting demo of the few that AMD had setup for me to look at was a pair of HP Pavilion dv5 notebooks. One of these notebooks used the AMD ‘Puma’ technology and one used Intel ‘Centrino 2’ technology (Montevina).  Both of these notebooks were connected to identical screens and the movie Pirates of the Caribbean was played with the internal Blu-Ray player on each system. Both systems were configured with the factory integrated graphics and the movie was played back with Cyberlink PowerDVD 8. Both notebooks were able to play the movie, but only the AMD powered notebook was able to play it smoothly. AMD was obviously showing how the Radeon HD 3200 graphics processor was able to playback Blu-Ray, while the Intel Graphics Media Accelerator X4500 could not even with the latest version of PowerDVD installed.

The next demonstration they showed me was both systems running the recently released game Iron Man. The HP dv5t notebook with the Intel Graphics Media Accelerator X4500 graphics solution was not able to render the game correctly.  The HP dv5z notebook with the ATI Radeon HD 3200 Graphics was able to render the game correctly.  A picture of this demonstration with the systems running the the game at the same exact spot can be seen above. 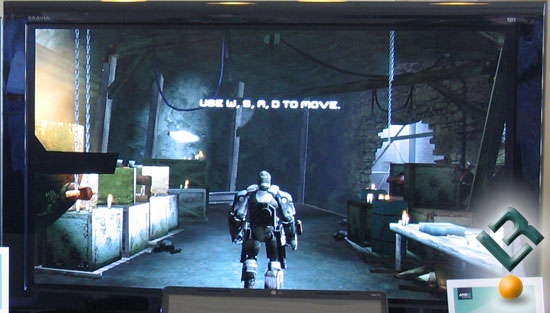 In order to give you a better idea of the in-game differences this is a closer look at the AMD based HP dv5z notebook with the ATI Radeon HD 3200 Graphics. 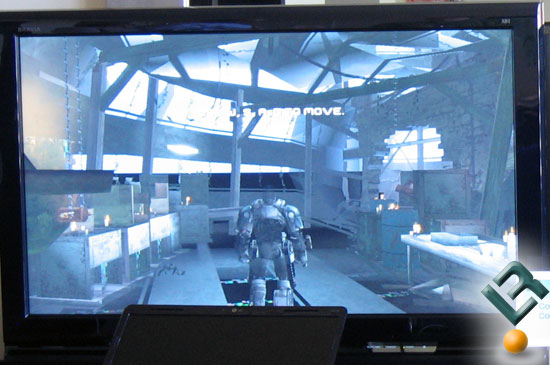 This is the Intel based HP dv5t notebook with the Intel Graphics Media Accelerator X4500. A you can see things are actually missing from the image in the background and a number of other things are not right.

AMD made a marketing movie of these two systems running Iron Man and placed it on You Tube:

AMD wanted to highlight that no platform or solution on the market today is perfect by highlighting some of the known flaws of the Intel Centrino 2 platform.  The fact that the HP dv5t notebook with a Blu-Ray player and integrated graphics can’t playback smooth HD content is something that is news worthy for the single reason that it should work if the HD player is being offered on this platform . When it comes to gaming the game title Iron Man is not a popular game title right now and it is obvious that AMD of course picked this to demo as they knew it had issues on the Intel platform.

Legit Bottom Line: AMD wants everyone to know they have a competitive platform in the notebook market and that they feel it is superior when it comes to watching HD content thanks to their integrated graphics solution.