In overseas markets, Hyundai has revealed a new minivan called the Staria. It comes in multiple configurations, including the slick Camper 4 version seen in the photo here. The van has a pop-up roof with a dedicated controller with a bed that can hold two people.

The second and third-row seats fold flat to create another sleeping space for two adults. The interior has storage and a small sink and refrigerator. Also fitted to the interior is a folding table, and there’s a slide-out exterior table as well. 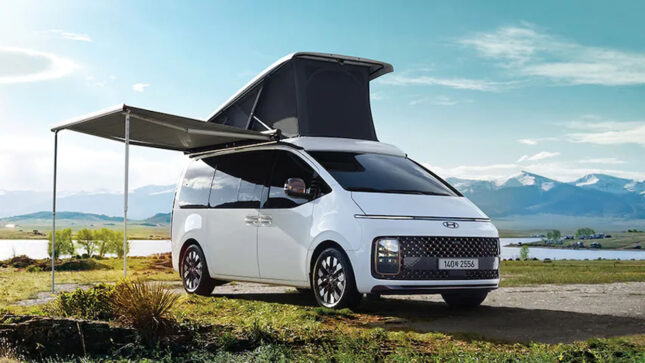 A retractable awning provides shade on the side of the van, and there is a mesh screen that can be fitted to the rear hatch area open to keep bugs out. The van does have hookups for power and water on the outside and an outside shower.

While we have no images, there is a Camper 11 promising to cram 11 people into the same space as Camper 4. Unfortunately, this van will only be sold in overseas markets and will not be available in the US.