Hyundai has revealed its new WRC racing car for 2022, which will run in a class requiring the vehicles to use hybrid power. While the car is based on the Hyundai i20 N, the racing car is very different, utilizing a turbocharged 1.6-liter four-cylinder and an electric motor.

Hyundai hasn’t announced the total power for the turbo four-cylinder and electric motor combined. However, Hyundai stated that the electric motor produces 134 horsepower and 132 pound-foot of torque. The battery pack utilizes regenerative braking to recharge during events and can be charged between stages using external sources. 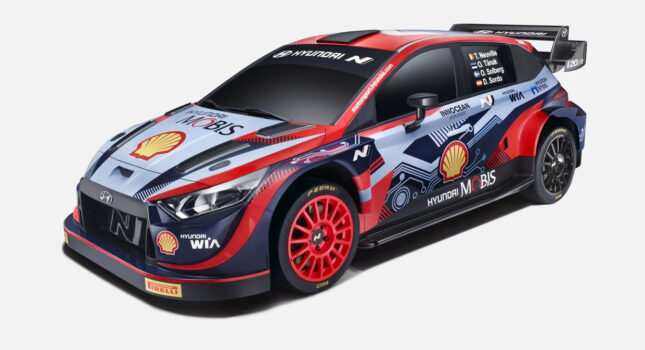 Anyone who’s ever watched rally racing knows that high speeds and tight trails can mean spectacular accidents. To protect the 3.9 kWh battery pack feeding the electric motor, Hyundai placed it inside a carbon fiber housing.

The season’s first race will happen at the Monte Carlo Rally on January 20. The car has much wider bodywork than Hyundai’s road vehicle with significantly widened front and rear fenders, different bumpers, a center-mounted exhaust, and a giant wing, all to provide downforce.