In July 2020, HyperX expanded its Predator DDR4 and FURY DDR4 memory families to include higher speed kits and larger capacities. If you haven’t looked at DDR4 memory kits in recent months or years the advancements have been impressive! HyperX Predator DDR4 memory kits are now available in massive 256GB (8 x 32GB modules) at clock frequencies of up to 3200MHz. If you are looking for speed, there is now a 16GB (2 x 8GB) kit of Predator DDR4 memory that is ready for 4800MHz operation straight out of the box!

The memory that we are looking at today is a HyperX Predator DDR4 RGB kit that is 64GB (2 x 32GB) and sold under part number HX436C18PB3AK2/64. This massive 64GB dual-channel memory kit is clocked at 3600MHz with CL18 timings and can be yours for a cool $367.99 shipped. That is a good amount of money, but it really isn’t bad as it could have been as DDR4 memory prices have fallen by roughly 15-20% in recent months. 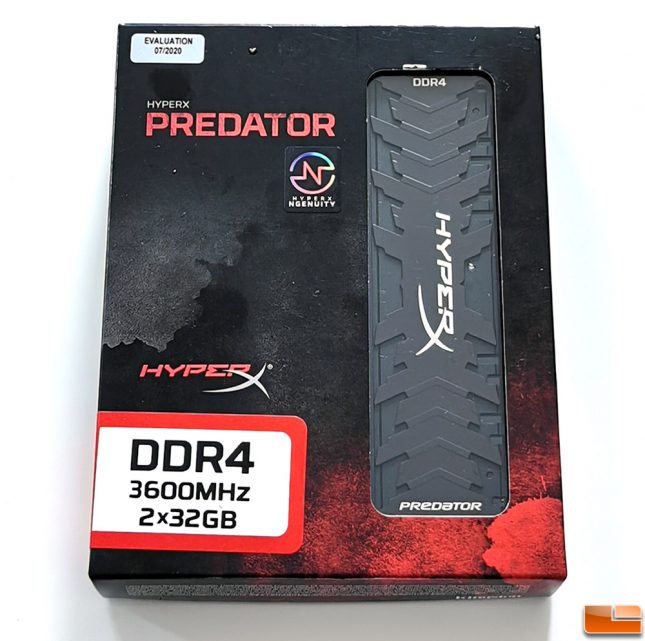 HyperX hasn’t changed the packaging for their Predator series since 2016, so there is nothing new to talk about on their full color packaging. It will be eye catching on the shelf at your favorite brick and mortar store and will be easy to recycle after you get your get the memory installed. 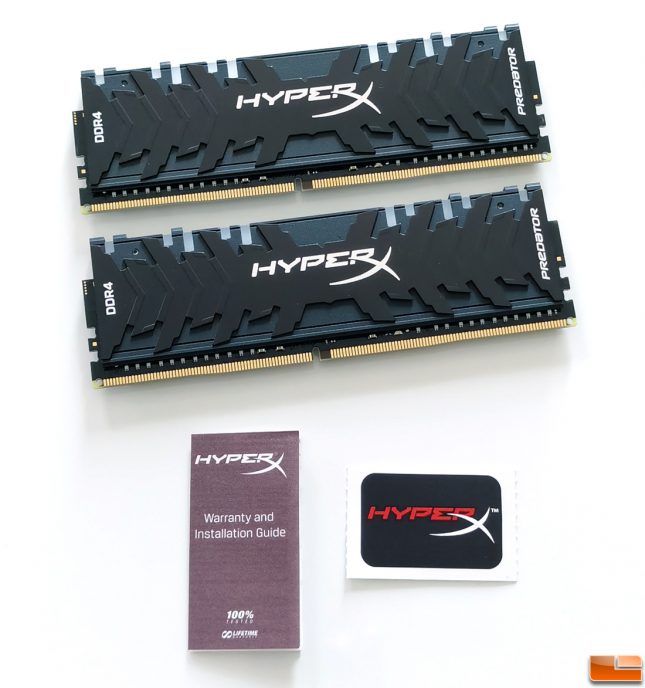 Inside of the packaging you get two 32GB DDR4 modules, a HyperX sticker and a small paper guide that covers the warranty and installation of the kit. The warranty is lifetime as always and the modules just plug-and-play as long as you install them into the proper memory slots. Pretty much every motherboard on the market today from Intel and AMD have two primary slots for a dual-channel memory kit, so be sure to find out which those are by actually reading your motherboard manual! 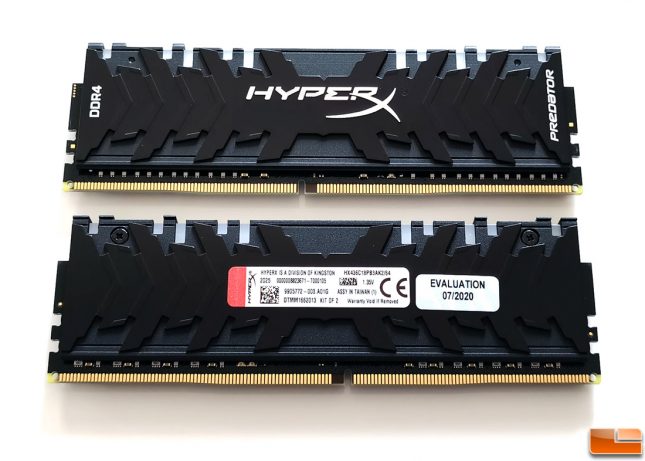 HyperX Predator DDR4 RGB memory first came out in 2018 and remains unchanged. They feature an aggressive black aluminum heat spreader that was designed to enhance the RGB light display. The modules come factory preset with the RGB wave lighting effect. If you want to change this you can use the HyperX NGENUITY software that is available to download for free. On the front of the modules you might noticed a tiny hole near the top edge of the module next to the word Predator. This is for HyperXs Infrared Sync technology that ensures the light show is always properly synchronized. 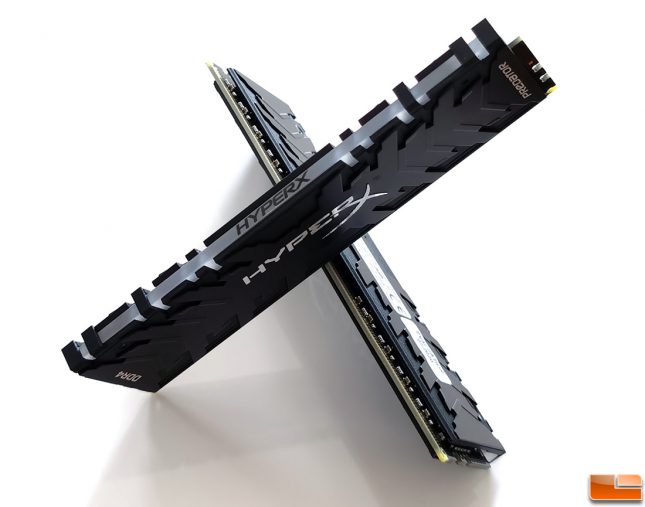 The HyperX HyperX Predator DDR4 RGB modules rise 41.24mm from the DDR4 memory slot, which is something that those with after market air coolers might want to pay attention to. Retail boxed CPU coolers and All-In-One (AIO) liquid cooler owners shouldn’t have anything to worry about. 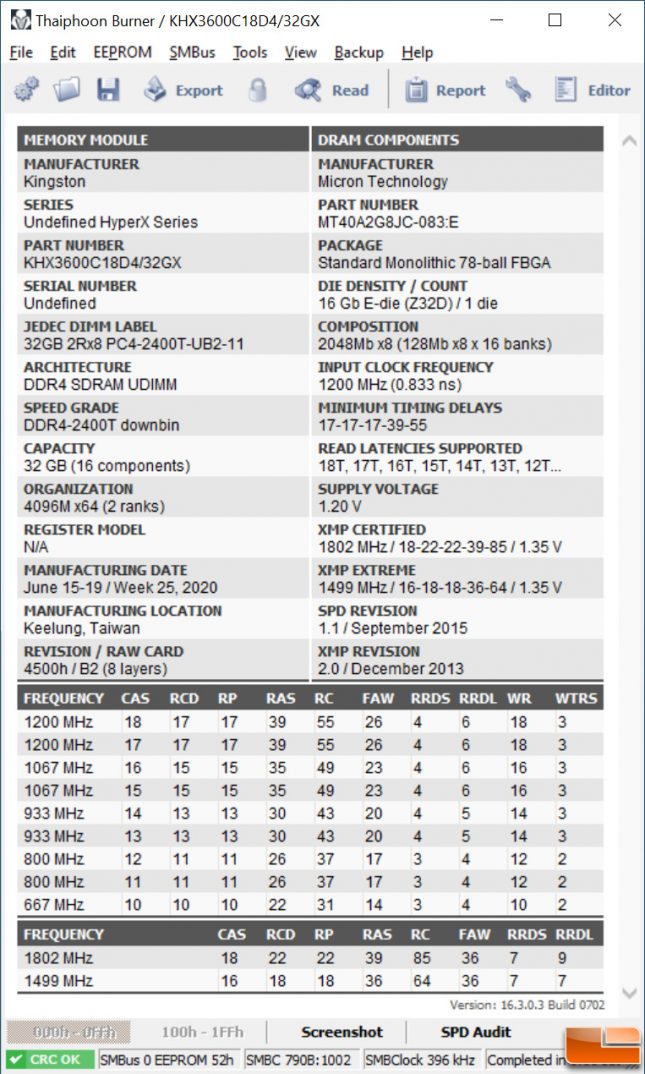 Running Taiphoon Burner software allows enthusiasts to gather all sorts of information about their memory kit. HyperX is using Micron 16Gb E-Die (part number MT40A2G8JC-083:E) from Micron Technology on 8-layer B2 revision Printed Circuit Boards (PCB). The utility also shows that this is a dual rank memory kit. Taiphoon Burner is a great piece of software that tells you all that you need to know about a memory kit without having to remove the heat spreader! 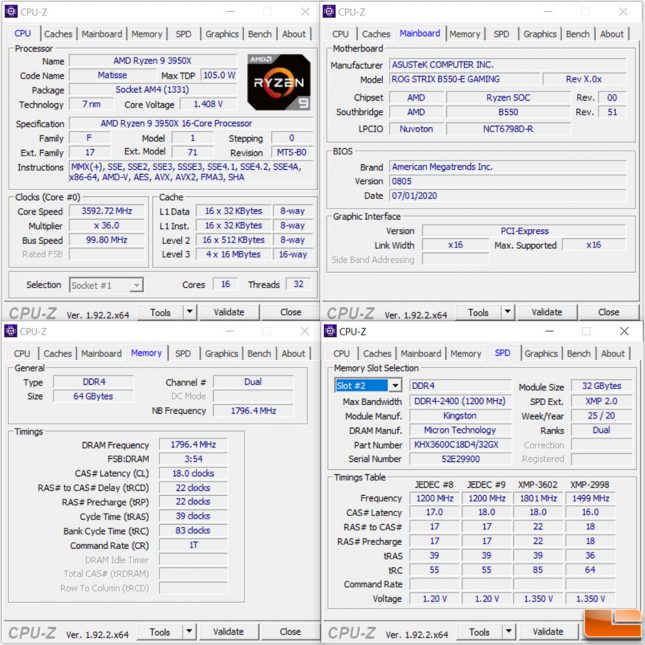 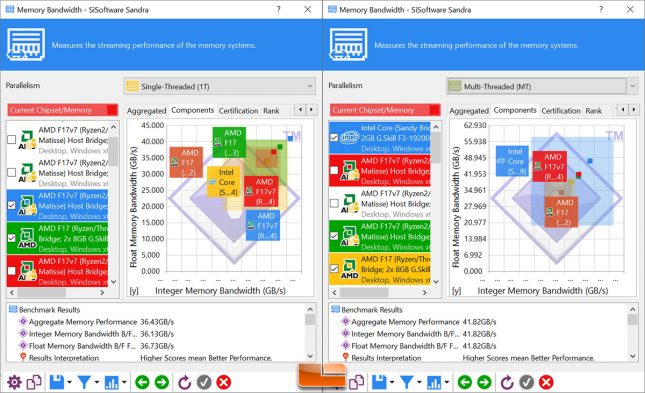 On our AMD X570 platform that is running the AMD Ryzen 9 3950X processor we were able to get 36.4 GB/s of memory bandwidth on a single CPU thread and 41.8 GB/s using all CPU threads. 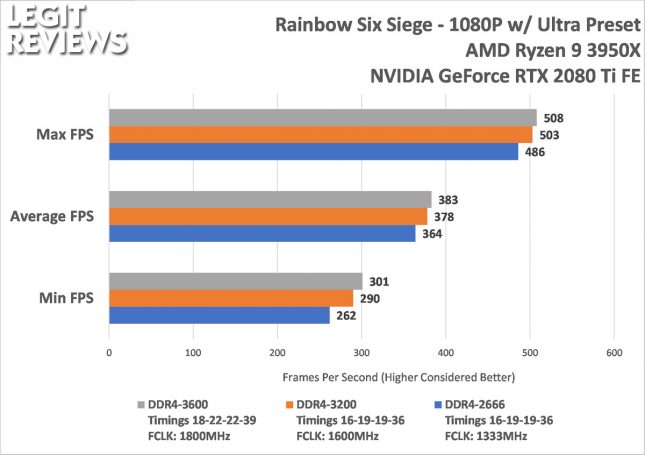 Using the built-in benchmark in Rainbow Six Siege we benchmarked this 64GB kit of memory at its rated DDR4-3600 speeds and then down clocked it to run at DDR4-3200 and DDR4-2666 speeds. We used the HyperX timings for their 64GB DDR4-3200 Predator RGB memory kit, so you can get an idea of the performance benefits by moving up from 3200MHz to 3600MHz memory. The test was run five times for each clock speed and then the averages were used to create the chart above. We were getting about 3.8% better performance on the minimum frame rate and 1.3% better performance on the average performance by using 3600MHz CL18 memory versus 3200MHz CL16 memory. There was nearly a 15% improvement seen on the minimum FPS when going from 2666MHz CL16 memory to 3600MHz CL18 memory! Memory clock speed and timings most certainly will impact your gaming experience!

We wanted to try to overclock this 2 x 32GB memory kit to see how these larger capacity kits from HyperX do. By simply changing the memory clock in the UEFI on our ASUS ROG STRIX B550-E Gaming motherboard we were able to reach DDR4 3800MHz with the VDIMM running at 1.35V. To reach DDR4 4000MHz we needed to bump up the voltage to 1.40V, but we managed to get that speed stable with this dual-channel memory kit! Running at 4GHz on a 64GB DDR4 memory kit is super impressive. 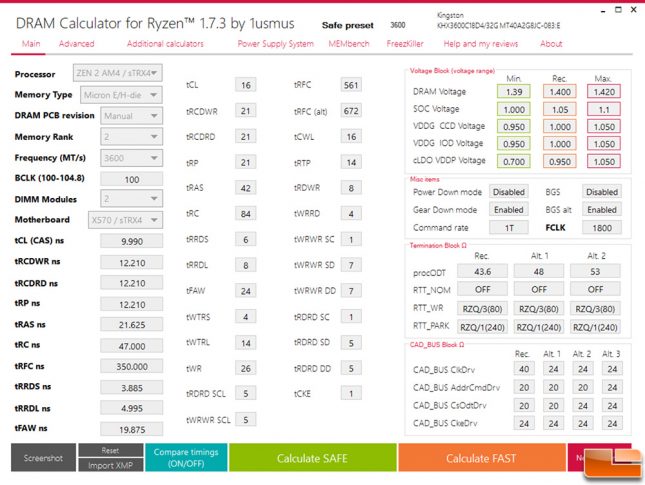 When it came to tightening timings for better performance at the stock clock speeds we turned to DRAM Calculator for Ryzen 1.7.3 by 1usmus. We calculated the safe settings by importing the XMP values into the program from Typhoon Burner, but the system would not successfully load Windows 10 Pro v2004 with these settings. So, trying to get lower latencies for better performance will be tough with this kit!

If you are looking for a 32GB or 64GB memory kit you are likely wanting to future proof your system or have run into a situation where you ran out of memory. The HyperX Predator 64GB DDR4 RGB memory kit ensures content creators and gamers will have enough memory to allow their apps to function optimally. The HyperX Predator DDR4 RGB kit worked great on the Intel Z490 and AMD X570 test platforms that we have here on the test bench. We ultimately picked the AMD X570 platform to benchmark on since AMD Ryzen processors have a ton of momentum lately. Running high-capacity dual-rank kits at high speeds used to be a pipe dream on AMD AM4 platforms when they were first introduced in 2017, but not any longer! This 64GB kit ran perfectly on our AMD X570 board and delivered us with the capacity we craved and the stability that is required.

Overclocking memory isn’t as popular as it once was, but we found that this 64GB DDR4-3600 memory kit was able to overclock up to DDR4-4000 speeds by bumping up the DRAM voltage to 1.40V in the UEFI. This is great news for the remaining overclockers out there as there is some clock frequency left in there that you can try to get.

Legit Bottom Line: HyperX Predator RGB memory looks the same as it always has, but is now available in higher capacity memory kits and clock speeds!