Like many of you we waited patiently for Intel to release their new 3rd Generation Core series of 22nm Ivy Bridge processors and the Intel Z77 Express chipset before building a new system. The new processors and chipsets are the latest and greatest hardware available for the popular mainstream socket LGA1155 platform.  The Intel socket LGA1155 platform has been around since January 2011 and has had three major chipset revisions (P67, Z68 and Z77) since being released and supports two Intel microprocessor architectures (Sandy Bridge & Ivy Bridge). This platform is what we would consider mature as it has been around for over a year and has all of the major bugs worked out.  The new Intel Ivy Bridge processors are symbolic in the sense that they are likely going to be the last new microarchitecture used on this platform. Intel will be moving over to Haswell processors in the first half of 2013 and that move will bring a new socket to market (LGA1150).

If you are looking to build an Intel PC right now, there is no reason to wait as nothing worth waiting for is coming out that we are aware of in the months to come. Intel, AMD and NVIDIA have all released new architectures in the past several months, so now is the time to build!

We wanted to build up an Intel Ivy Bridge powered Small Form Factor (SFF) PC and we thought we’d show you what we came up with.  Our dream mini-ITX system should be:

Nothing too farfetched, but being able stuff all that in a mini-ITX case is going to be the challenge. 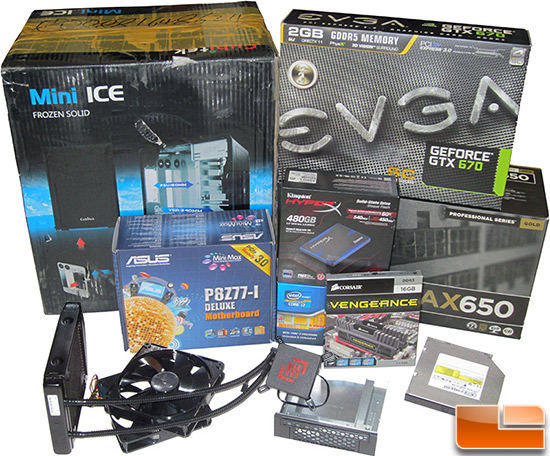 We spent pretty much the entire month of April 2012 putting together a parts list for what we think will become the dream PC for SFF enthusiasts.

As you can see, we have assembled a list of hardware that we feel will make for one amazing PC that comes in at just under $2600 before shipping. You can easily get this build under $1500 by changing the storage drives used and the processor, so don’t freak out by the price tag of all these parts! Your build will likely be different than this!

Talk is cheap in life, so we aren’t just going to give you a list of parts that should work together.  We went out and got all these pieces of hardware and will walk you through building this exact system and then will show you how it performs!