The Hot Wheels Legend Tour is underway now and was recently in the UK searching for the next car to turn into a 1/64 scale collectible. The UK entrant into the contest is the Volvo P1800 gasser seen in the image below. The car is a ’60s era vehicle that originally came with a small four-cylinder engine.

That four-cylinder engine has been removed and in its place is a massive 454 cubic-inch Chevrolet V-8 engine. To add even more power to the engine, it’s fitted with a giant supercharger. 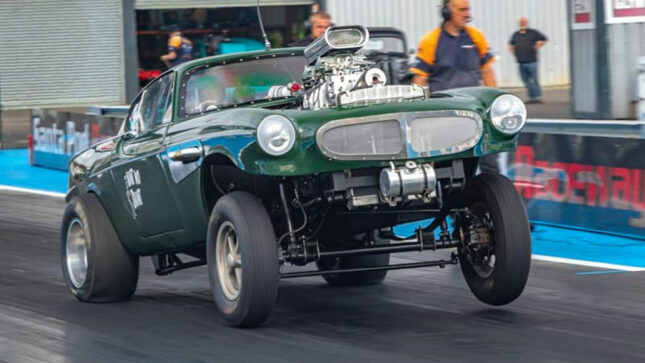 The car is reportedly able to run the quarter-mile in 10.01 seconds at 133 mph. The car is nicknamed “Ain’t no Saint” and will move on to the semifinal rounds being held on November 4.

If the car makes it through the semifinals, it will move to the final round to be held on November 13. Judge Ian Callum, former design director of Jaguar, said, “This is a beautiful example of a gasser a drag racer with street car form. Often with dragsters, the chassis is so important that the body gets overlooked, but this example is fabulous with great attention to detail. It completely hits the Hot Wheels brief.”