The folks over at Hennessey Performance are currently working on what they hope will be the fastest car in the world. The car is called the Venom F5, and it’s targeting a top speed of over 300 mph. The car uses a twin-turbo V-8 engine that makes over 1800 horsepower to reach such an incredibly high velocity.

Consider all that power is crammed inside of a car that uses copious amounts of carbon fiber tips the scale at under 3000 pounds, and it’s bound to be insanely fast. And as he has recently shared a video of the car undergoing high-speed aerodynamic and stability testing. 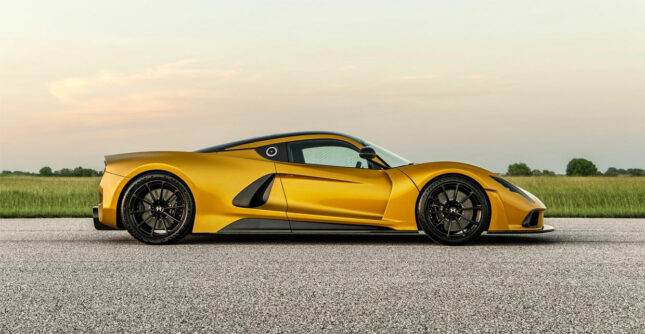 While the video shows the car moving over 250 mph, Hennessey says it’s not undergoing top speed testing. However, Hennessey does say that the car has F5 Mode engaged.

While it doesn’t say exactly what F5 Mode is, it’s likely got something to do with optimizing the vehicle for high speed. The sound the twin-turbo V-8 makes is the car rockets past the camera sounds like a private jet getting ready for takeoff.