Hands On With The Oculus Rift Virtual Reality Headset

Hands On With The Oculus Rift

Quakecon 2012 opened yesterday, and Legit Reviews is on the floor covering the annual event. Quakecon is an event that Legit Reviews has been attending pretty much every year since 2003 and it is a great event for gamers. This year Quakecon 2012 will be no different with a number of panels on making and designing games, gaming tournaments with over $150,000 in prizes to distribute, and offer hands-on demos with games like Dishonored and Doom 3 BFG Edition. John Carmack, Todd Hollenshead and Pete Hines kicked off the event with a great keynote and during the talks we found out about the Oculus Rift that just recently went up on the Kickstarter website. We posted a little bit about the Oculus Rift last night, but today we were actually able to hold a prototype in our hands and try it out on Doom 3 BFG. 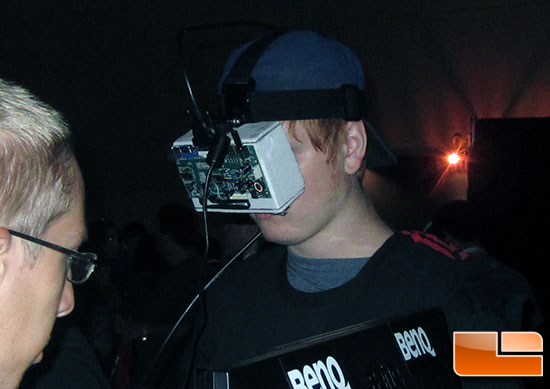 It is a little bit strange to see someone wearing a cardboard box that has been super glued together, but who cares if it works like it should. What gamer would say that they wouldn’t want a virtual reality (VR) headset designed specifically for video games? Could this little white box that is being shown off today at Quakecon 2012 really change the way we all think about gaming forever? 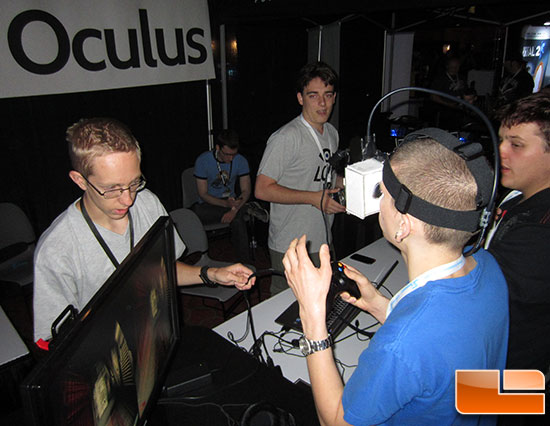 The Oculus Rift is designed to give gamers an incredibly wide field of view thanks to a high resolution display, and ultra-low latency head tracking. The demo unit is pretty basic right now, but it was working great. The head tracking software was thought up by John Carmack himself and he got his game developers to Doom 3 BFG to properly with the Oculus Rift. It didn’t take too much work on the developers part, but coding changes will need to be made in the game title for the Oculus Rift to work. Oculus informed us that any game that uses the Unreal 4 game engine should be able to run on the Oculus Rift since John Carmack and team has already done the coding.

In our use of the Oculus Rift we were impressed by the new immersion, but we did notice that the resolution was a bit low. We expressed this with Oculus and this is what the company had to say:

“Believe me, we want to deliver high resolution, and that is something we will deliver in the consumer version. For now, though, there are very practical limitations that resulted in the current resolution:

1) Currently, the HDMI standard does not support pushing dual 1080p at 60hz, only 24hz. Dual cables have a huge set of issues (Bulk, keeping the image in sync, impossible to drive from consoles), and Displayport does not have wide enough adoption to justify exclusivity to that standard.

2) Rendering a game in stereoscopic 3D means you are effectively rendering the game twice, once for each eye, dropping your FPS by as much as half. In addition, HMDs need a consistently high refresh rate, even occasional drops greatly reduce the quality of the experience. Hypothetically, if you wanted to push a game into dual 1080p HMD, you would need a computer capable of rendering the game in 2D and never dropping below 120fps. There are very few people out there with rigs that capable, and we need the developer kit to be accessible to all developers, not just the ones with $6,000 liquid nitrogen cooled screamers.

3) Higher resolution displays are very expensive right now. By next year, the prices will be reduced by an order of magnitude.

4) The lens design coupled with the software distortion means that the center of the image has much higher resolution in the center than in the periphery, much like the human eye. I know it is hard to believe this, but if you ask anyone who has used the display, they will tell you how effective it has been. It has been shown to hundred of people, ranging from average joe non-gamers to the rock stars of the game developing world, and the experience has been universally praised.”

Oculus makes very good points there and they highlighted that cost is one of the main ones as they want the Oculus VR Headset to be affordable. 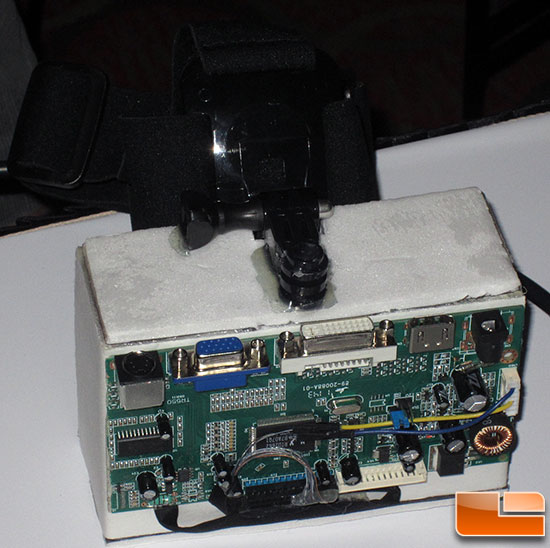 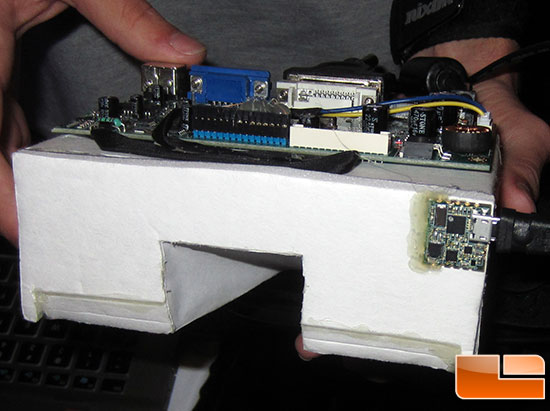 This smaller PCB holds the head tracking sensors, so this boards provides accelerometer and gyro data for the software to interpret. 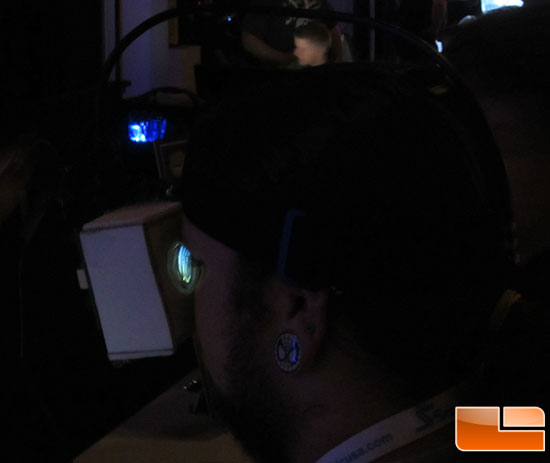 Here is a shot of the Oculus Rift without the flash so you can see that it is displaying the game title properly. Dozens of gamers stopped by to try it out when we were at the booth and we must say that all were rather impressed. They also had one of the longest lines of the show and the gamers at Quakecon are loving it!

If you are wanting to invest in the Oculus Rift it will cost you at least $275. For that price you will receive your own DIY kit for building the Rift from scratch. This includes all individual parts for the prototype as well as instructions for assembling it by hand. The company is planning to ship these kits in November 2012, which is a month before the official developer kits ship. This price also gets you a copy of Doom 3 BFG, and full access to the Developer Center, SDK, docs, samples, and engine integrations! Check out Kickstarter for all the details.