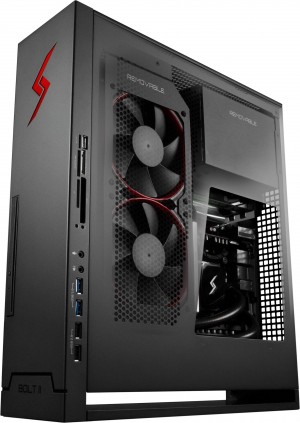 Gaming PC manufacturer Digital Storm announced their first Steam Machine called The Bolt II this evening at CES 2014. Digital Storm describes this system as a “hybrid Steam Machine gaming PC,” and gamers can get one if they are willing to spend at least $1,899. The custom designed chassis is said to have pretty good airflow and there is closed-loop CPU water cooler with a 240mm radiator inside that keeps the overclocked processor nice and cool.

The Digital Storm Bolt II also features Digital Storm’s proprietary HydroLux technology, a control board that resides inside the chassis that monitors the Bolt II’s temperature in real time, automatically striking the perfect balance between thermals and noise. HydroLux can also create a custom look by controlling the LED lighting inside and shifting the color spectrum to fit the user’s preference. We weren’t able to see the LED lighting control system in action as it was not installed on the PC that we saw in the suite here at CES 2014.

We also got a chance to see a fully loaded Aventum II. The Digital Storm Aventum II starts at $5,837 and the system that was built for CES 2014 was powered by an Intel Core i7-4960X processor and four water-cooled NVIDIA GeForce GTX 780 Ti video cards! The system is over-the-top, but people are buying them!