Legit Reviews has worked with ASUS to bring you a chance to win one of the rarest video cards that can be bought right now, the ASUS GTX 980 20th Anniversary Graphics Card! ASUS let us know that only about 200 GeForce GTX 980 Gold Edition video cards have made it to North America region and one of our readers will be the proud owner of one of those cards. ASUS launched their first discrete graphics card in 1996 and it was based on the S3 Virge/DX GPU. It’s hard to believe that ASUS has been selling video cards for 20 years! 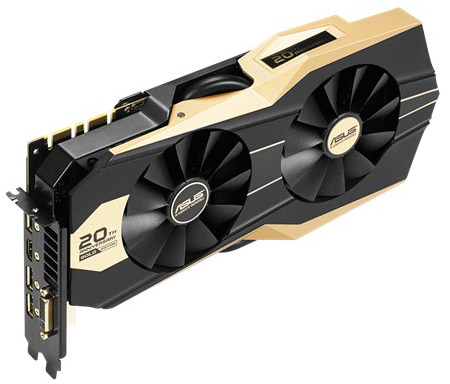 The ASUS GTX 980 20th Anniversary Graphics Card is the fastest NVIDIA GeForce GTX 980 ever released with an insane 1431MHz GPU boost clock speed! The other features on this card are equally impressive!

The current price on this beastly card is $699.99 over at Amazon, so someone is going to be very happy when the contest is over. To enter the contest you’ll have to jump through a few hoops, but they aren’t too bad.

1) For starters you’ll have to sign up to subscribe to the ASUS PCDIY website to be eligible. If you aren’t a registered member on ASUS PCDIY you are not eligible to win.

2) Once you have registered on the ASUS PCDIY website you’ll then need to post up your favorite thing about ASUS graphics cards in the comment section on our giveaway news post (the one you are on now). Try to be genuine and let us know your thoughts or memories are for ASUS GPUs.

3) This contest is open to those 18 or older in the United States, Canada and the United Kingdom only. Winner will be responsible for any import taxes as well as general taxes or fees.

4) Lastly, enter the contest and then get optional additional entries by using the Lockerdome form below! We’ll be using the randomizer in Lockerdome to pick the winner and then ASUS and Legit Reviews will be confirming that person is a member of ASUS PCDIY and posted a comment on LR.

Complete the action items below to enter to win ASUS GTX 980 20th Anniversary Graphics Card from Legit Reviews!
in LegitReviews’ Polls on LockerDome

Update – 6/1/2015 at 11:15am: The winner has been announced!  Sorry for the delay, but we had to wait until Monday for all the folks at Lockerdome and ASUS to be at the office! We’ll have a new contest posted up later today.