Gigabyte In The Fast Lane 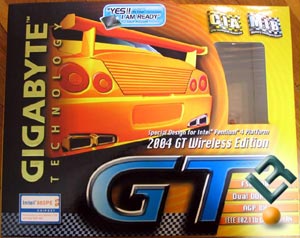 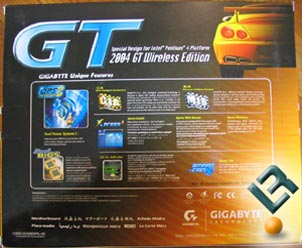 Although much attention right now is focused on the new i915/i925 chipsets, there is still several good performing 865 and 875 boards out there for consumers. With the introduction of the new chipsets, we will also eventually see the prices fall on these now "old" chipset powered boards. I prefer to look at them as "mature" rather than aging, as most 1st generation boards are hardly really ready for the average consumer. An example of this is the current issue with the new Intel ICH6R chipset, where some are having to be pulled off the market due to issues. It seems those of us who jump on the bandwagon and purchase the "newest" computer hardware are really beta testing! These consumers also end up being the ones to come up some of the fixes for the issues we find. Okay, I’m done preaching to the choir! Let’s see what we have in front of us today. As you can see from the opening picture, we have the Gigabyte GA-8IPE1000 Pro2-W. The box is nice and colorful for great retail shelf presence, and even has a fold-out flap which gives more info on the board. There is a sticker on the front of the box that lets you know that the motherboard is Prescott ready. This board is really aimed at the budget conscious overclocker that is wanting a few features to go along with his overclocking. Because it is an i865 chipset, it will be less expensive than the i875 boards. This board also is very inviting to those who are into wireless networking. With the GT theme and race car on the package, this board just screams “get in the fast lane.” It does a great job of getting you into the fast lane! 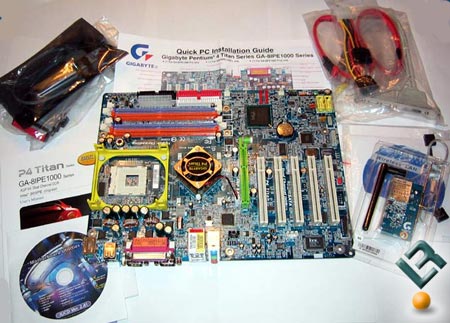 This board came with everything, including the kitchen sink! It has the typical bundle: cables (including SATA), instruction manual, full color poster, various back-plates connectors (SPDIF, Firewire) and installation CD. The most interesting item included is the IEEE 802.11b Wireless lan card! We will look at that in a bit.