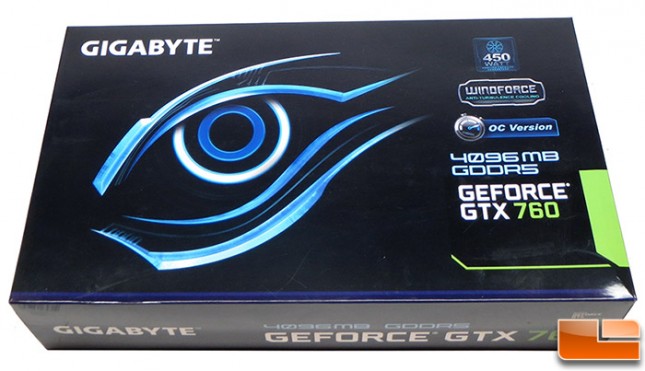 The NVIDIA GeForce GTX 760 2GB is one of the most sold graphics cards today. It has proven to be a great card for those with a 1080p gaming setup as it is relatively affordable and can often be found for around $250. In recent months companies like Gigabyte have begun offering 4GB models of this popular card for an extra $40-50 over the price of the base model with 2GB of memory. Gigabyte currently has the Gigabyte GTX 760 GDDR5-2GB for $259.99 and the Gigabyte GTX760 GDDR5-4GB for $299.99, so they are charging $40 or 15% more to have double the frame buffer. Many gamers are wondering how much memory they need, so when we got the chance to look at the Gigabyte GeForce GTX 760 4GB we couldn’t pass it up. We would finally be able to see if the extra frame buffer was just a marketing gimmick or something useful that was worth the extra money. 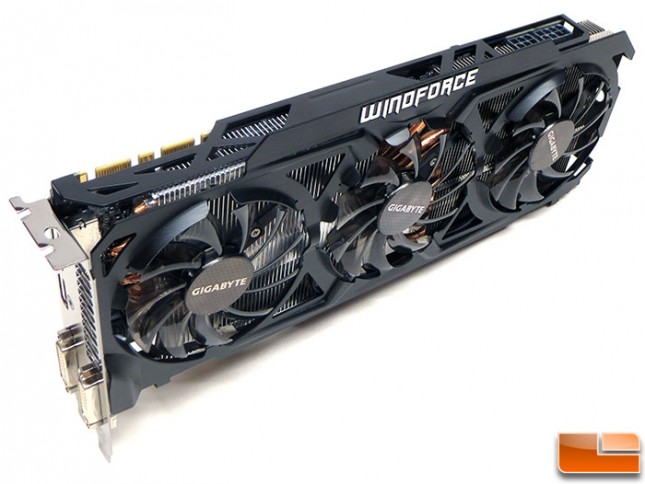 The Gigabyte GTX760OC-4GD is a factory overclocked card, which means that it runs with a base clock of 1085MHz, a boost clock of 1150MHz and the 4GB of memory operates at 1502MHz or 6008MHz effective. The NVIDIA GeForce GTX 760 2GB reference card runs at 980MHz base, 1033MHz boost and 1502MHz on the memory. This means that Gigabyte has a 10.7% overclock on the base clock, so right off the bat you’ll be getting a nice performance boost versus other models that are running reference card speeds. 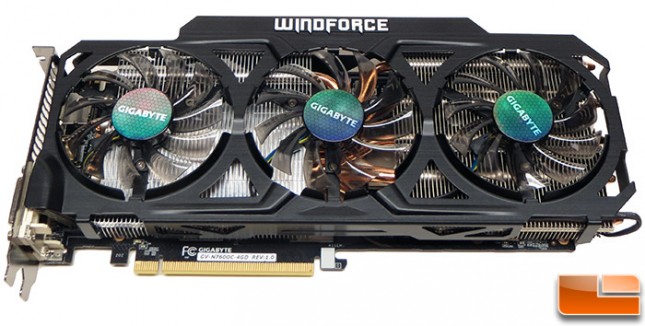 The Gigabyte GTX 760 4GB is a pretty long dual-slot card, so make sure you measure your case to ensure that it fits inside okay. The cards black PCB is 10-inches in length, but the fan shroud hangs over the end of the card bringing the total length of the card to 11-inches. The three eleven blade fans have an actual blade diameter measurement of 75mm. 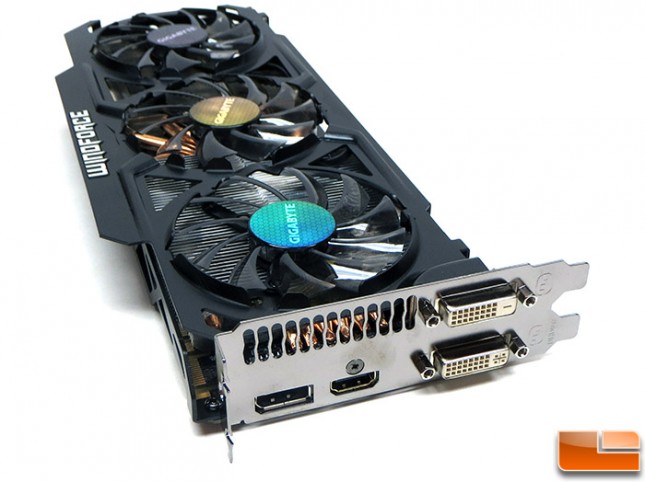 The Gigabyte GeForce GTX 760 OC WindForce 3X 4GB GDDR5 graphics card has a total of four display connectors. You have dual-link DVI-I, dual-link DVI-D, HDMI and DisplayPort outputs. All of the video outputs are standard size, so no adapters are needed. The only downside to using full size connectors is that the exhaust fan outlet is small, but due to the WindForce 3X GPU Cooler design most of the air is blown back into the chassis. 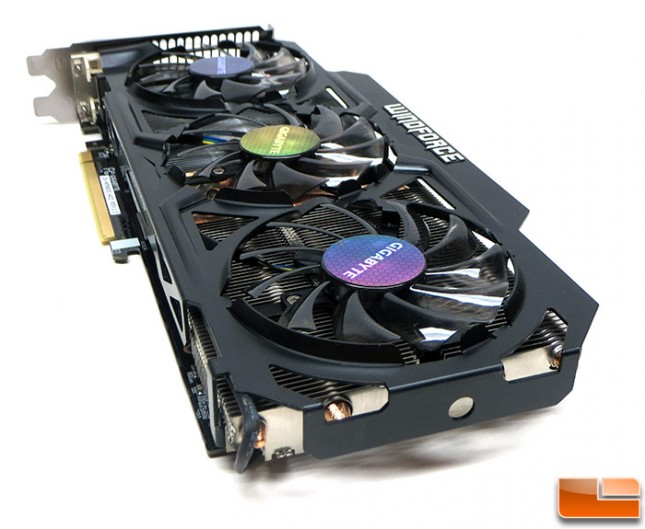 Here is a closer look at the end of the video card to show how the fan shroud is pretty much open all the way around the card. The fans push air down into the two large aluminum heatsinks and then the air pretty much goes out in every direction once it hits the PCB. 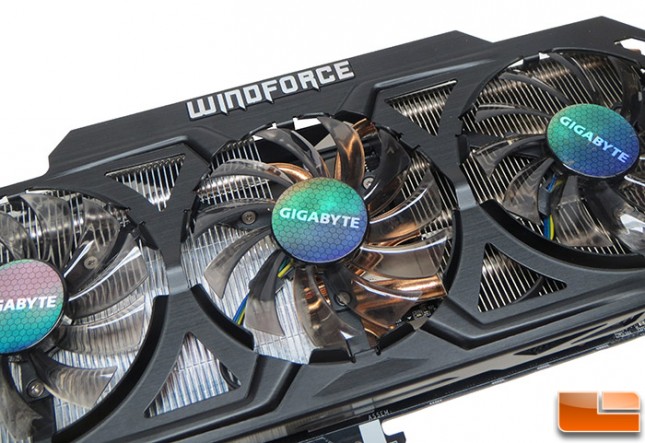 There are a total of six copper heatpipes on this card with three going to each aluminum cooling fin array. You can see the gap in the arrays underneath the middle cooling fan in the image above. 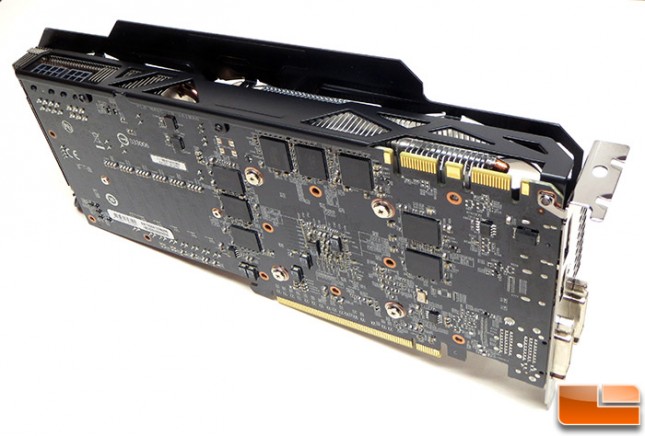 The Gigabyte GeForce GTX 760 4GB graphics card supports triple-SLI, so Gigabyte supports it as well and the card has a pair of SLI connectors along the top of the PCB for multi-GPU systems. Gigabyte ships the card with blue colored dust protectors on all the video outputs, PCIe slot and the SLI connectors (we removed them for the pictures). 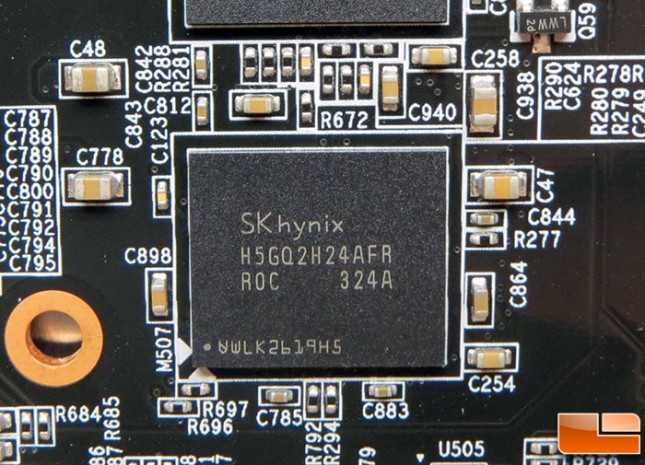 Gigabyte is using 2Gb SKhynix GDDR5 SGRAM memory ICs with part number H5GQ2H24AFR-R0C. Each chip has a storage capacity of 256MB and they are speed rated for 6Gbps operation at 1.5V.

Now that we know the basics about this card, let’s take a look at the test system and then compare a GeForce GTX 760 2GB versus a GeForce GTX 760 4GB with the base clock and memory clock speeds set identically.