Once again we have the opportunity to look at a Gigabyte motherboard.  We were pretty impressed with the GA-MA790FXT-UD5P motherboard that we recently reviewed, so we got a little excited to see how its little sibling, the GA-MA770T-UD3P, would stack up.  Today’s economy is all about doing stuff as economically as you can, so most people will like a motherboard that can be gotten on the cheap and still perform very well.  So, is that where this board fits in from Gigabyte?  That is exactly what we intend to find out as we put it through our testing and see how it stacks up against the likes of a 790FX and a 790GX board. 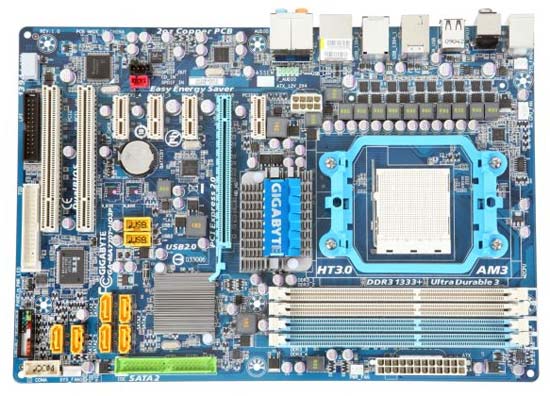 The GA-MA770T-UD3P uses Gigabyte’s famed Ultra Durable 3 technology on this budget friendly AMD socket AM3 platform. This technology brings 2 oz copper PCB and further helps to reduce the system temperature and dramatically enhance the performance. Based on AMD 770 chipset, the GA-MA770T-UD3P supports all the 45nm AMD AM3 Phenom II series processors that feature DDR3 memory controllers and HyperTransport 3.0 technology. To top all that off the board also features Easy Energy Saver technology to help conserve power and be green friendly. Not a bad list of features considering this board retails for just $79.99 shipped at Newegg! Add in one of the $87 AMD Athlon II 250 3.0GHz dual-core processors and you have a motherboard and processor for under $170!

The AMD 770 chipset does have some limitations though and the most obvious is that it lacks support for multi-GPU configurations as it sports just a single x16 PCI Express 2.0 slot for graphics. Looking at the AMD chipset specifications site for reference, we can see exactly what this chipset offers compared to the 790X and 790FX chipsets. According to AMD the 770 chipset lacks ATI CrossFireX Technology, Quad PCIE Blocks, GPU-Plex Technology, and Auto Xpress. Three of these features revolve around the board only having a single PCI Express 2.0 slot, so if you only plan on running one video card these features don’t mean much to you. AMD Auto Xpress technology is a feature that automatically activates with AMD/ATI components to deliver better CPU, GPU, and system performance. If you know your way around a BIOS you can manually set things, so again no big deal. What you end up getting here with the GA-MA770T-UD3P motherboard is a solid single GPU platform that is able to run all the latest processors for under $80! Not bad at all! Let’s take a quick look at the specs: