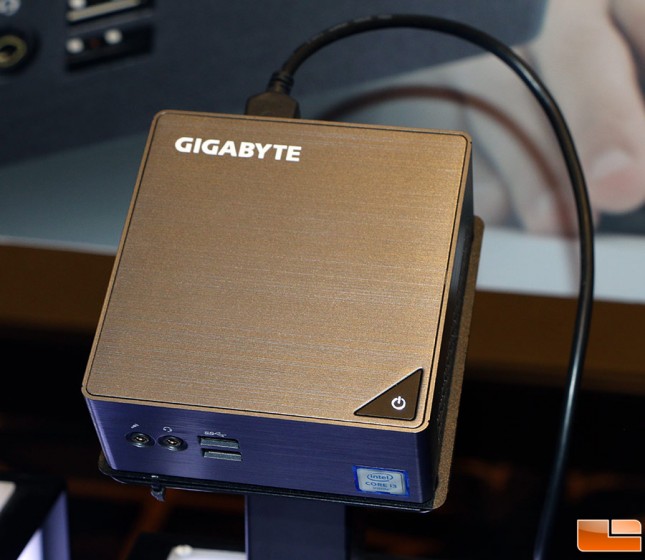 Gigabyte has unveiled its new range of BRIX mini PC systems which are now equipped with Intel Skylake processors and Thunderbolt 3 connectivity at CES 2016. The Brix miniature desktops feature slightly updated cases that are now color coded to go along if they are using an Intel Core i3, i5 or i7 Skylake processor. The Intel Core i3 model uses the lightest silver colored case, then Core i5 features a darker gray color and finally the Core i7 model is almost charcoal black. The differences are very subtle as the Core i5 version is shown above and the Core i7 version is shown below. Gigabyte informed us that all of the new Brix models support M.2 SSDs for storage and should be available in two skus as some will want to go with a model that also supports a 2.5-inch hard drive or SSD. Most all of the Gigabyte Brix cases had two USB 3.0 ports and 3.5mm audio in/out on the front panel with the power button being on the top plate. 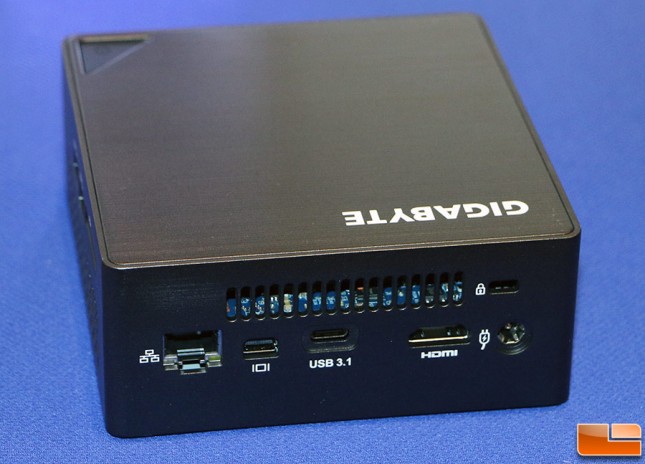 On the back you have Gigabit LAN, DisplayPort, USB 3.1 Type-C, HDMI 2.0, power and a Kensington lock. Around the left side you can just barely see the SD Card slot that operates over USB 3.0.

The model above will be compatible with Thunderbolt 3 over the USB Type-C connector which offers bandwidth up to 40Gbps and the ability to fast charge external USB devices or connect to an external graphics device to turn a Gigabyte Brix PC into a gaming powerhouse. The Thunderbolt 3 port will also enable features like “Power Delivery 2.0 for fast charging of external devices, daisy chaining of up to 12 devices and support for DisplayPort 1.2 capable of handling 4K monitors,” Gigabyte said in their press release on the systems. 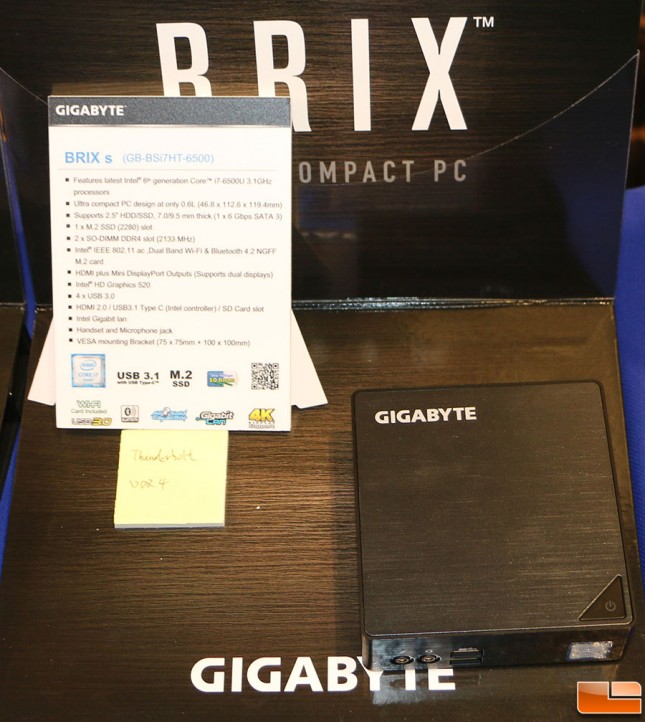 It should be noted that just the Gigabyte GB-BSi7T-6500 and the Gigabyte GB-BSi5T-6200 models will feature the USB Type-C port. We got a laugh when we noticed that Gigabyte forgot to list Thunderbolt 3 as a feature and just wrote it on a post-it note for their CES 2016 display. 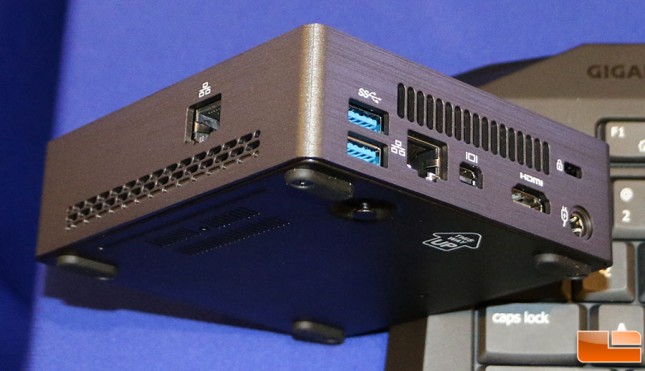 Gigabyte even has a Skylake powered BRIX that features Dual Gigabit LAN ports on it for the very first time! Gigabyte has really developed a Brix model for everyone when it comes to their 6th Generation Intel Core ‘Slylake’ powered series! 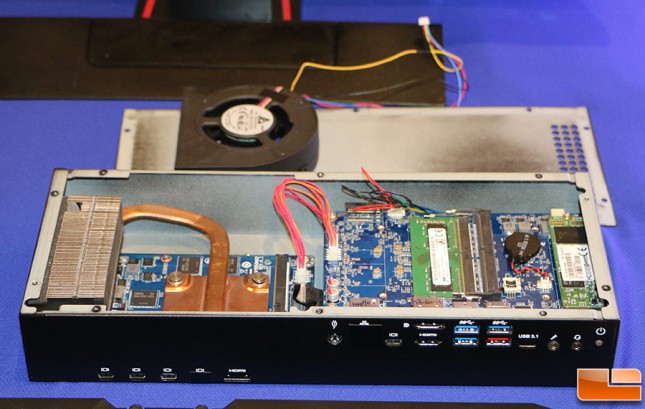 Gigabyte was also showing off a prototype industrial case that was very interesting as Gigabyte said that they are also looking into a version similar to this for gamers.

UPDATE 1/14/2016: Gigabyte informed us that this unit is called the Gigabyte Brix GTX Pro! 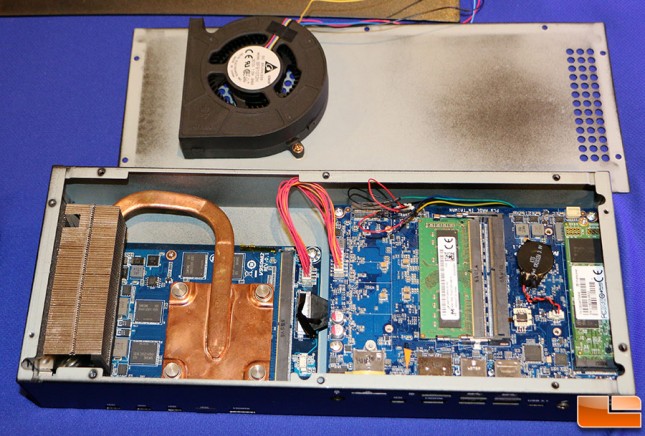 Inside you have an Intel Core i7 Skylake based platform with dual-channel DDR4 memory, M.2 PCIe 3.0 x4 for the lastest and greatest SSDs and the ability to run discrete mobile graphics! 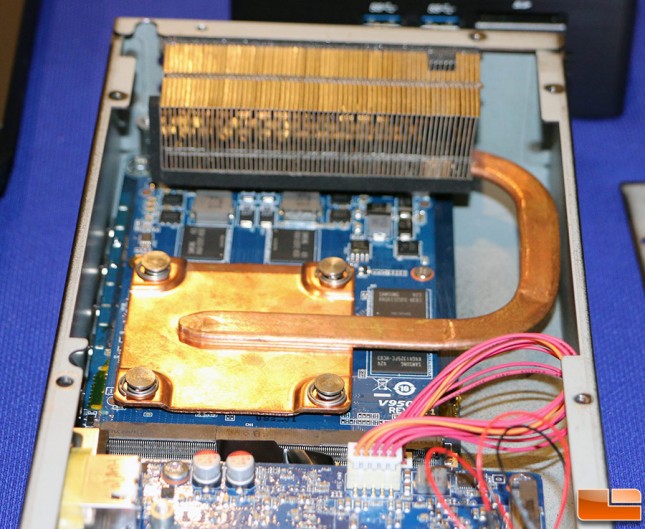 The NVIDIA GeForce GTX 950M MXM module is plugged into a daughter board that sits next to the Gigabyte Brix mainboard that is then in turn connected with a wired connection. The GeForce GTX 950M has a GPU cooler on it that sports a copper baseplate with a single copper heatpipe that goes to a small aluminum fin array to help dissipate the GPUs heat.

When it comes to external connectivity from the Skylake motherboard you’ll find this board is loaded. Starting from the left there is a DC power port, mini DisplayPort, DisplayPort, HDMI, four USB 3.0 ports (1 supports fast charging), USB 3.1 Type C, 3.5mm audio in/out and the power button. The Gigabit LAN port was covered up for some reason, but fear not as this is a prototype. 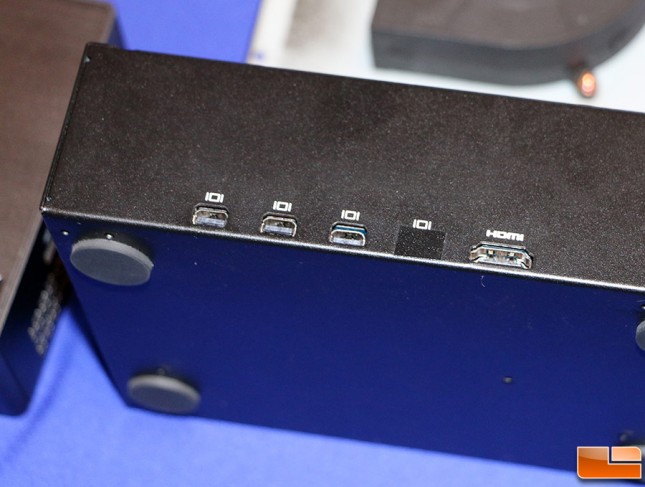 Gigabyte had some awesome innovation going on when it came to Brix this year at CES 2016!