Right now it seems like a lot of companies are trying to improve our audio experience as it pertains to the PC. And, I have to admit, a little improvement is always welcome. As a musician and music lover I am always open to new ways to make my audio sound a bit better. Now keep in mind I said “sound better,” which is not to be confused with over processed. There is nothing worse than audio that is so over processed it just sounds fake. 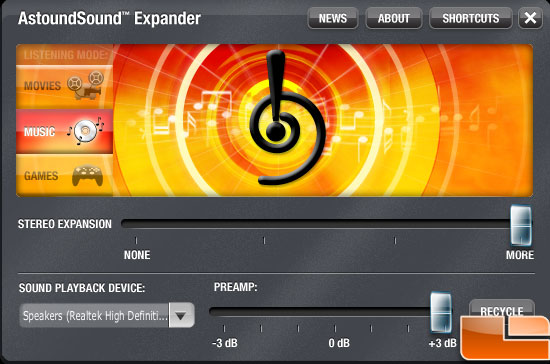 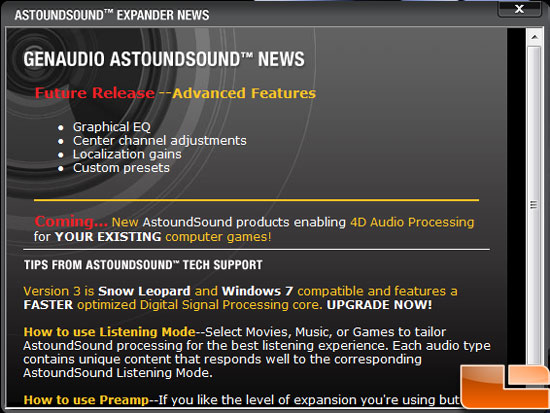 Astoundsound Expander processes a single output of audio, and if you happen to have more than one output it allows you to choose the output you wish to use. It is much simpler to use than the SRS Labs’ HD Audio Lab; basically, all you really have to do is install it and it sits in your system tray and processes the audio. But please don’t take “simpler to use” as a negative, as that is just simply not the case. The audio sounds every bit as good as its competitor and it doesn’t require a ton of adjustments. Astoundsound Audio Expander 3.0 is equipped with the ability to change the settings to choose between whether you want to listen to movies, music or games, as well as the ability to change the actual intensity of the effects processing and it has a preamp feature that lets you add or take away gain from the audio. 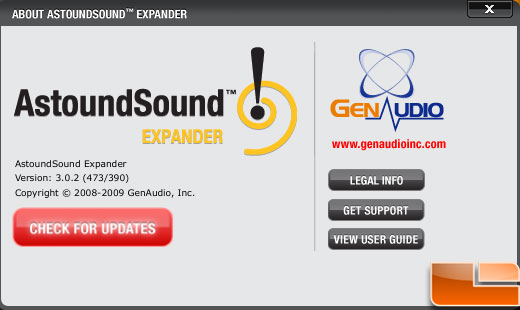 Although it is missing the bass enhancing feature of the SRS HD Audio Lab it doesn’t really need it as it does a great job with the bass without an option to manipulate it. This was clear when I busted out the trailers for The Chronicles of Narnia 3 trailer the movie Machete. Talk about feeling like someone was busting through your windows or some mythical creature was in your living room! The Astoundsound Audio Expander 3.0 really made me feel like I was a part of the action. But best of all was the fact that none of the audio sounded over processed of fake. 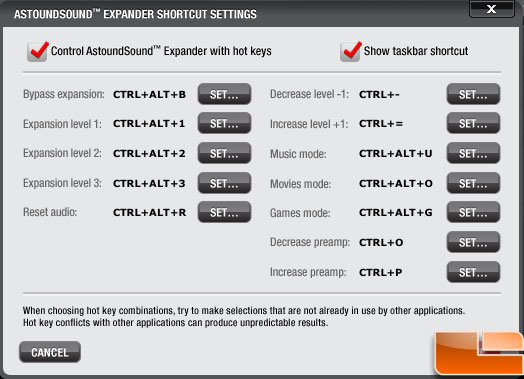 Unlike most audio processors that deliver their sound as a horizontal stream at the height of the speakers, Audio Expander 3.0 creates a sphere or audio that surrounds the listener and makes the sounds appear closer as well as making the audio more immersive. I also found that it added quite a bit of clarity to some of my music, but on some of my music it actually seemed to drag the vocals to the back which I wasn’t too fond of, but luckily that was only with a couple of songs that were quite old.

All in all I really enjoyed using the Astoundsound Audio Expander 3.0; it may not contain all of the features of the SRS Labs HD Audio Lab, but does it really need them? I didn’t think so. No matter what form of audio I threw at it, it did its job and made it sound fuller and added a tad of clarity. I liked that I could just run the .exe, set the sliders to my liking, and I was off and running. With a price tag of $39.95 you may want to take full advantage of the full 30 day trial before you decide to buy.

The Legit Bottom Line: It may not be as feature rich as its competitors, but it truly doesn’t need it. The Astoundsound Audio Expander 3.0 sounds every bit as good as all of them. It’s easy to install and even easier to use. It makes music, movies and games sound like they are in your face.