We didn’t check every etailer this morning, but trying to purchase the NVIDIA GeForce RTX 3080 was pretty brutal. Major etailers like Newegg couldn’t handle the wave of traffic and it brought their entire site down. Even the NVIDIA.com store suffered an issue where people could put a card in their cart and then couldn’t finish the purchase. Then by the time the pages seemed to be working again all the models were sold out.

The frustration of the gaming community was palpable, but they were also blaming bots for scooping up cards before us mere mortals were able to do so. Unfortunately, the us of bots isnt unique to this release. The have been used heavily for sporting events, concerts, broadway tickets and so on. 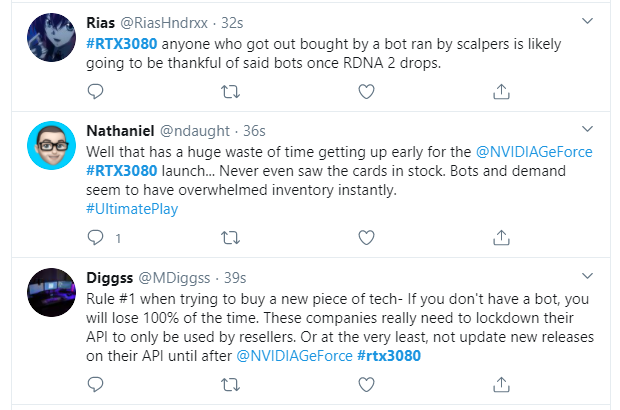 We wanted to know what NVIDIA thought about the community anger at how the RTX 3080 orders opened up and to see if they would be able to do anything about bots. NVIDIA quickly responded and said that they are manually reviewing orders and trying to get the cards into the hands of their customers.

“This morning we saw unprecedented demand for the GeForce RTX 3080 at global retailers, including the NVIDIA online store. At 6 a.m. pacific we attempted to push the NVIDIA store live. Despite preparation, the NVIDIA store was inundated with traffic and encountered an error. We were able to resolve the issues and sales began registering normally.

To stop bots and scalpers on the NVIDIA store, were doing everything humanly possible, including manually reviewing orders, to get these cards in the hands of legitimate customers.

Over 50 major global retailers had inventory at 6 a.m. pacific. Our NVIDIA team and partners are shipping more RTX 3080 cards every day to retailers.

Let’s hope that the NVIDIA GeForce RTX 3090 and RTX 3070 launches go a bit smoother and that all etailers make some improvements!