Gaming On Vista — Are the Video Card Drivers Ready?

Last week ATI sent out a press release claiming that ATI is ready for Microsoft Windows Vista with their latest Catalyst drivers, which is a pretty bold statement as Vista is still the primary release candidate. Legit Reviews likes to stay far and clear of pre-production operating systems, but when the hardware companies we work with are making claims in press releases it means that LR has to take a look and see how legit these claims are.

We downloaded the recently released Windows Vista RC1 Build 5600 from Microsoft and wanted to compare gaming performance on Vista to that of a system running Windows XP Professional.  ATI makes it sound like driver performance is where they want it, so it’s time to take a look at both ATI and NVIDIA drivers when it comes to gaming.

While the idea of comparing performance levels between the two operating systems sounded great on paper it wasn’t too easy to complete in person. After taking a pair of identical Western Digital 250GB hard drives we put fresh installations of both operating systems on the respective drives and started benchmarking. We quickly found that DOOM 3, Quake 4 and PREY all do not run correctly on Vista making them useless for benchmarking purposes with the drivers that come loaded in Vista RC1.  Other games like X3: Reunion use StarForce software, which is blocked by Microsoft and rightly so.

World of Warcraft works, but we did notice some tears in the screen and stutters that kept us from using it as a benchmark. We ended up using Call of Duty 2, DOOM 3, Far Cry, Serious Sam 2 and F.E.A.R. for our testing, but there was also a catch.  Call of Duty 2 refused to run correctly on NVIDIA graphics cards, while it ran fine with ATI graphics cards.  The same was also true for Far Cry which ran like a champ on NVIDIA cards, but wouldn’t launch with ATI cards.  So far we wouldn’t call using Vista RC1 a “breakthrough experience” by any means, but that’s why they call it a release candidate. 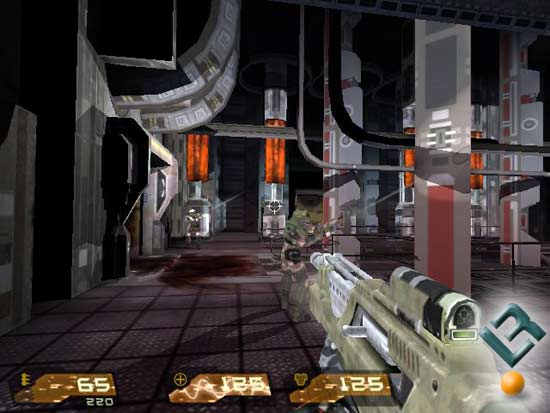 Is that Quake? No, although it could pass as the original Quake (screen shot) what it really is happens to be Quake 4 v1.3 running on an NVIDIA GeForce 7800GTX 512 video card at 640×480. in Vista RC1.  In case you are wondering about performance it scores a blistering 30 frames per second at 640×480. Why is this?

For starters Quake 4, DOOM 3 and PREY are all OpenGL video games, and OpenGL has never been officially supported by Microsoft. A little history lesson for those that might not know — OpenGL was developed by Silicon Graphics and remains an open standard API and competes with Direct3D, which is an proprietary API designed by Microsoft Corporation. So now that you know where OpenGL and Direct3D came from, which do you think will work on Vista better? There is hope though for those that use OpenGL applications. A standard Windows installable client driver (ICD) can be used meaning that OpenGL will be fully accelerated and be fully compatible with Windows Vista’s Aeroglass UI. We found that by manually installing NVIDIA’s ForceWare 96.33 drivers that OpenGL titles would work fine, but not right out of the box. If the ICD is not installed OpenGL support will only work as a layer sitting on top of Direct3D creating a performance hit when OpenGL applications are used as seen by the image above when no ICD was installed.