PC gamers will soon have a new place to search out the hardware they want for their gaming rigs. GameStop has announced that it will begin selling PC hardware, including Nvidia RTX 3000 graphics cards. GameStop will specifically sell GPUs, and gaming laptops, with company CEO George Sherman recently stating the company would expand its product catalog.

Sherman said, “This includes growing our product offerings across PC gaming, computers, monitors, game tables, mobile gaming, and gaming TVs to name only a few.” A new weekly ad, pictured below, shows some of the RTX 3000 series graphics cards the company offers. 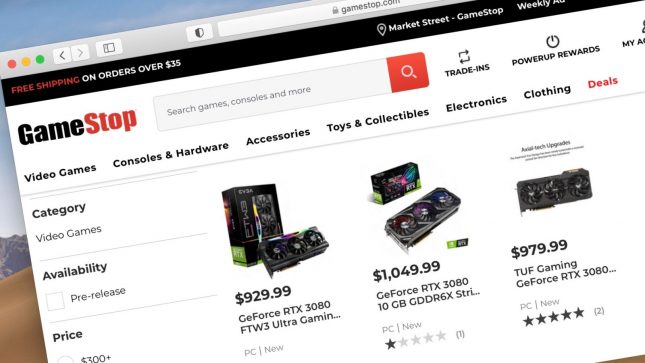 If you’re hoping for some deals, prices appear to be pretty much standard as they are anywhere else. With supplies short of many PC components, we wouldn’t expect GameStop’s move into PC hardware to indicate an increase in supply on the market. In recent months, it’s sometimes cheaper to just buy a prebuilt computer with the hardware you want in it rather than purchasing your hardware and rolling your own gaming PC.

While GameStop currently has multiple RTX 3000 series cards listed, all the cards are listed as not available. The listing says the products will arrive around April 16.