Veering away from minimalist design, the GAMDIAS Hermes P2 RGB makes excellent use of an aluminum top plate, with extensive plastic accents and a built-in wrist rest that is part of the keyboard assembly. The wrist-rest being built in can be both good and bad, since it sticks to the keyboard without any wobble. Unfortunately, if you want to use your own comfortable wrist rest the non-removable nature of the Hermes P2 RGB built-in wrist rest will make that a bit difficult to achieve. There is minimal branding on the Hermes P2 RGB, with a GAMDIAS logo sitting on the top bezel where the USB cable exits and the Hermes P2 model name printed above the arrow keys.

The GAMDIAS Hermes P2 RGB uses a floating key cap design with an aluminum top plate that dips at the wrist rest and then raises up at the top bezel, giving the keys a nice framed area that the hands can naturally flow over. The key font on the Hermes P2 RGB is large and pronounced, as you’d expect on a gaming keyboard. I don’t like that GAMDIAS has gone with keys that have both upper and lower case letters for the font, which makes them look odd. The frame of the Hermes P2 RGB is very sturdy and doesn’t flex, but since the wrist rest is plastic and the top frame is aluminum, you can actually feel the wrist wrest start to flex from the frame when you do a twist test. Still, the overall build quality of the frame and keyboard as a whole is pretty solid, with everything fitting together well and no loose tolerances. 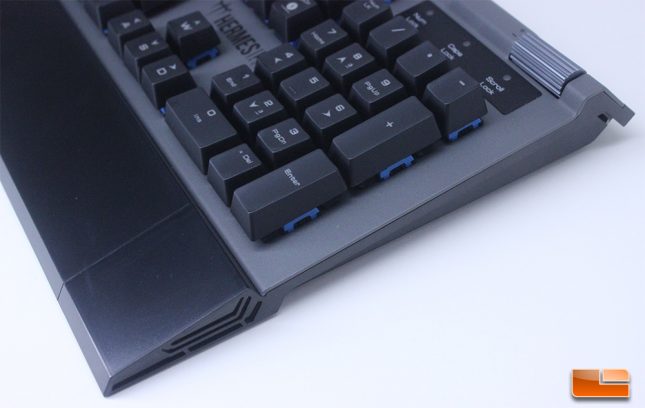 The Hermes P2 RGB has a really aggressive profile, with the side having angled lines in the wrist-rest. The top aluminum backplate is fit to the rest of the frame very nicely and the Hermes P2 RGB definitely will look at home on a gaming battlestation. 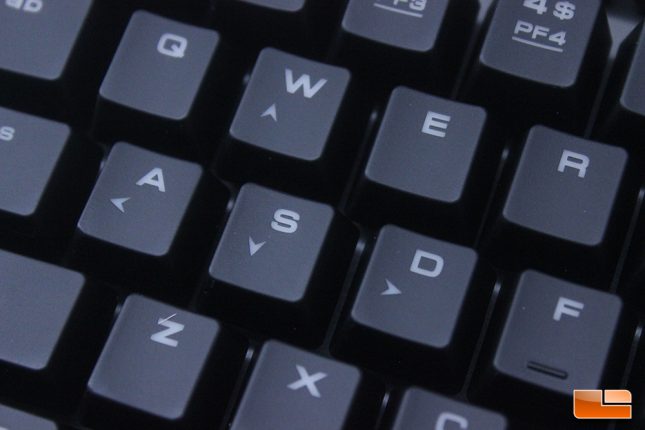 The Hermes P2 RGB is outfitted with basic ABS key caps that should hold up fairly well, but will be prone to shining over time. Thankfully, GAMDIAS is using Cherry MX-style stems on their switches, which I’ll get to in a moment, so these key caps can be replaced with any number of aftermarket key caps that are available. GAMDIAS touts the interchangeable arrow keys/WASD keys on the Hermes P2 RGB, but I don’t really see the point. When key caps wear down, you can replace them. I do think that the arrows on the WASD keys are a unique touch, but I don’t think this kind of stuff is really all that beneficial to gamers, it is done for marketing and really just serves to add more legends to the key caps, which I don’t personally find aesthetically pleasing. 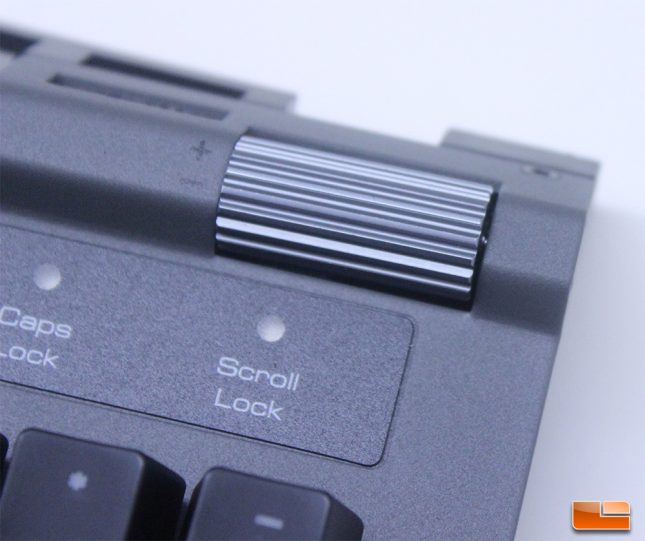 While there aren’t any dedicated playback controls, there is a rocker on the Hermes P2 RGB above the indicator LED section that allows for stepping volume control and it can also be pressed for mute functionality. The volume rocker felt a bit loose in the frame, but it worked well enough and was very handy to have when I needed to quickly mute my volume to hear something in the house. 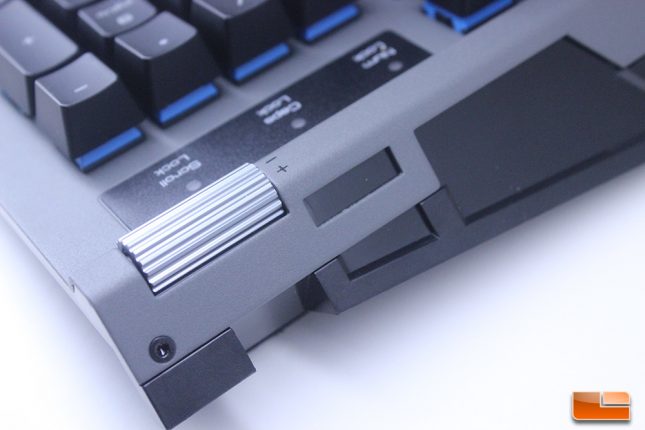 Rivets secure the top plate to the rest of the frame on the Hermes P2 RGB. The angled plastic of the sides makes its way throughout the keyboard, with the front sloping down into an aggressive angle with pointed forward. 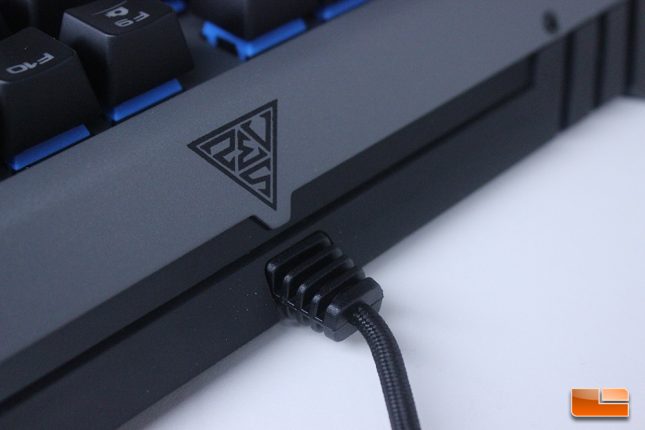 The GAMDIAS logo sits right over the USB cable reinforcement, which is secured nicely to the frame of the keyboard. If you look closely, you’ll see that the GAMDIAS logo spells out “ZEUS.”

The braided cable of the Hermes P2 RGB is thick, but not to an unnecessary degree. The braiding has been done nicely and the cable comes in at a healthy 1.5 meters of length, which should be plenty adequate for most users. The gold-plated USB connector of the Hermes P2 RGB has a specially formed plastic portion with the GAMDIAS logo on it. 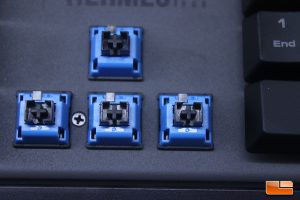 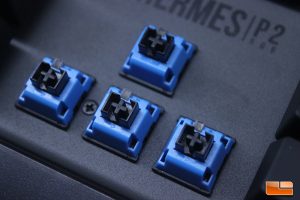 The GAMDIAS Certified Blue Optical Mechanical Switches are interesting, though nothing radical in terms of design. An uppercase “D” is printed on the base of each switch, but I am not familiar with this branding. The switches have the LED stem on the topside and it is offset slightly to the left, which is going to make the lighting slightly uneven underneath the key caps. The stems of the GAMDIAS Certified Optical Mechanical Switches are Cherry MX compatible, with support boxes around the stem that will help balance key caps on top of the switch and also should help improve durability of the stem. 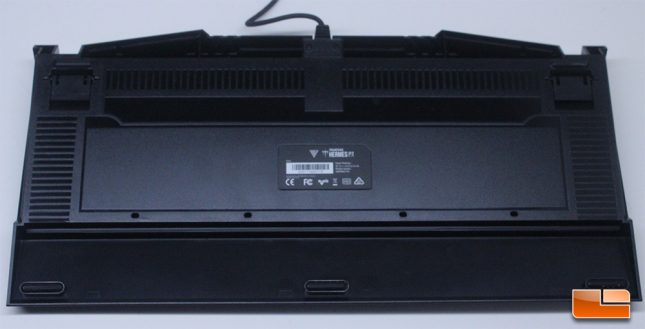 That’s a lot of plastic! The bottom of the GAMDIAS Hermes P2 shows us that the wrist-rest is part of the plastic frame, with several screws holding the keyboard together. There are rubber isolation bumpers on the wrist rest and rear corners of the Hermes P2 RGB, which keep the keyboard from sliding around and making noise on desks. 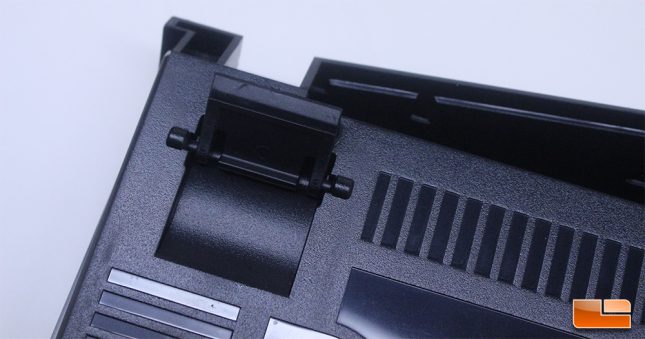 For testing the Hermes P2 RGB, I downloaded the latest version of the HERA software (V2.8.1(2017.12.11)) from the GAMDIAS site. I must say, the GAMDIAS download site looks pretty basic, but it’s pretty easy to find the download you need for your particular product. Installing HERA was a pretty uneventful affair, but the program did crash on me once during the initial launch and a couple of other random times after that when trying to start it up, so it could use some refinement.

HERA gives the ability to set macros on two keys, as well as set a variety of RGB modes, including per-key lighting. The Hermes P2 RGB is able to run up to six different saved profiles when HERA is enabled, as well. The functionality here is pretty good and gives the user some cool options, especially when it comes to key assignment and macro support. Unfortunately, I found that setting lighting modes was problematic, as sometimes hitting apply didn’t work and the keyboard would stay on its default mode. The layout of the software was also pretty confusing, with no apply buttons clearly labeled. Coming over from suites like Logitech Gaming Software, software like HERA definitely feels like a step back. 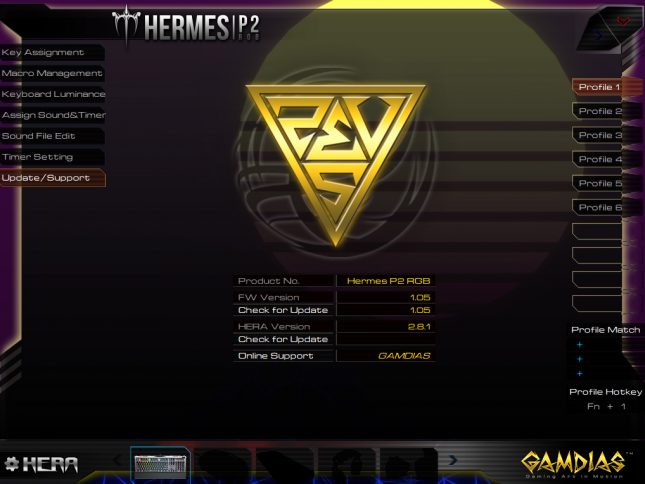 You can update the firmware on the Hermes P2 RGB through the HERA software. My keyboard had the latest version, thankfully.

Typing – The Hermes P2 RGB is a reasonably comfortable keyboard to type on, but the tactile feedback of the GAMDIAS Certified Blue Optical Switch was weak and the audible click actually came slightly before actuation, sometimes. The GAMDIAS switches don’t seem to require much actuation force, which does lend well to touch typing once you’ve gotten used to them.  Unfortunately, the GAMDIAS Certified Blue switches just never felt quite right, offering an inconsistent feel when compared to actual Cherry MX switches, or the Flaretech optical switches I’ve used. I stumbled in Typeracer when initially using the Hermes P2 RGB, an issue I don’t typically have with any of the keyboards I review.

Gaming – Blue style switches aren’t typically great for gaming, but these are passable since they have a pretty quick bounce time and actuate very quickly. GAMDIAS doesn’t give any actuation specs, but I’d say these switches actuate a little before 1/4 of the way down, so they are probably between .3-.5mm actuation. Unfortunately, the constant clicks provided by the Blue switches, while not nearly as loud as the click you’d get from a Cherry MX Blue or Razer Green, do tend to annoy my teammates in online games. I didn’t feel any benefit from using the GAMDIAS Hermes P2 RGB over my favorite gaming keyboards like the Logitech G Pro and Ducky One TKL RGB w/Cherry MX Silver switches, but besides the larger form factor giving me a bit more throw distance to my mouse, I didn’t have any issues with gaming on the Hermes P2 RGB. 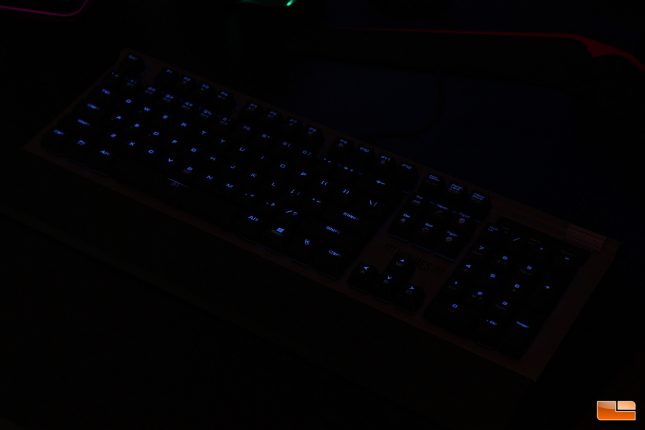 Lighting – The RGB lighting effects of the Hermes P2 RGB looked great, tough you could see where the offset LED led to inconsistent lighting on certain characters. Overall, though, I am impressed with how GAMDIAS has implemented the per-key lighting on the Hermes P2 RGB, with the backplate diffusing the lighting it nicely.

Overall, I like the style of the Hermes P2 RGB save for the key cap font and the keyboard has a solid build quality to it, but when I actually got to using the keyboard is where things went south. Bad software paired with a mediocre overall typing and gaming experience really let me down after I had such high hopes for the Hermes P2 RGB and these new optical mechanical switches from GAMDIAS.

Let’s see how the Hermes P2 RGB from GAMDIAS stacks up on the next page.