A few weeks back we took a look at G.Skill’s ECO series of DDR3 memory. The kit we reviewed, the G.Skill DDR3-1600C7 ECO Series, was binned for low voltage operation while running high frequencies and tight timings. Today’s kit is the DDR3-1600C7 Pi Series with part number F3-12800CL7T-6GBPI and is part of the PI Series. Counter to the ECO series, the PI Series is marketed toward the other end of the spectrum with performance in mind. 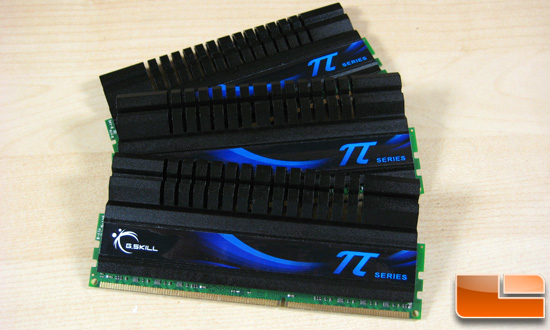 Like most performance memory modules the PI Series modules come with extra tall heatspreaders to aid in dissipating the heat produced by the memory. Just like processors the cooler you run the memory the longer they will last. Luckily, these modules also only need 1.5vdimm to run DDR3-1600 versus the typical 1.65vdimm that a lot of sticks are rated for.  In our testing we were able to even drop this down to 1.4vdimm for even better power efficiency and longevity.

These sticks have been tweaked for Intel’s X58 platform with an XMP profile that makes life for the consumer much easier. By simply selecting the XMP profile in the BIOS the board will configure itself to run these sticks with optimal memory timings and voltage settings. You will see in our testing, though, that G.Skill was rather conservative with their XMP profile and it may pay off to explore the capabilities of this kit when setting it up.