Fossils Of An Extinct Gigantic Rhinoceros Discovered In China

Anyone who’s ever seen a rhinoceros in real life knows that they are extremely large animals by modern standards. They’re often larger than cows and can be very aggressive. Paleontologists working in China have discovered new fossils of a giant rhinoceros species that they say was one of the largest land mammals ever.

The fossilized remains of two giant rhinos dating back 22 million years were discovered in China. They were much larger than modern rhinos, often standing more than 20 feet tall at the shoulder and weighing more than 20 tons. That means they were larger than mammoths, making them the largest land mammal that ever lived. 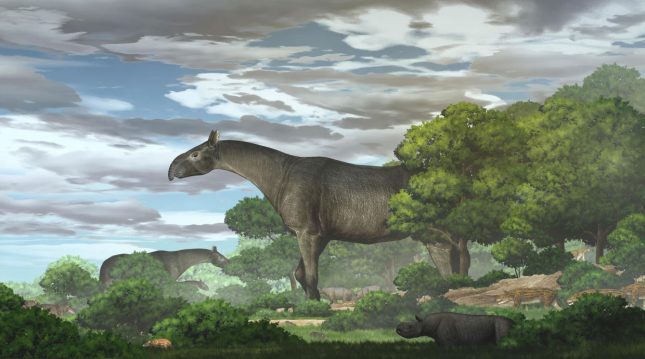 The fossils were discovered in May 2015 in the Linxia region of the Gansu province in northwest China. One of the fossils was a skull, jawbone, and teeth and the Atlas vertebrae connecting the head to the spine. The other fossil was a trio of vertebrae.

Using those remains, researchers were able to reconstruct the ancient animals and classify it as a new species. The species was dubbed Paraceratherium linxiaense.