Not long ago, the developers behind Fortnite delayed the launch of Season 3 until June 11. Ahead of that official launch, some artwork for Season 3 has leaked via a new PlayStation background and icon for the game. The image, which can be seen below, shows the battle bus floating over a patch of open water past a desert island with three palm trees in the background.

Fortnite fans have been expecting Season 2 to end with some sort of flood that changes the map. The live story event that will presumably bring that flood kicks off this weekend. One of the biggest surprises is that Epic Games teased this change a year ago. 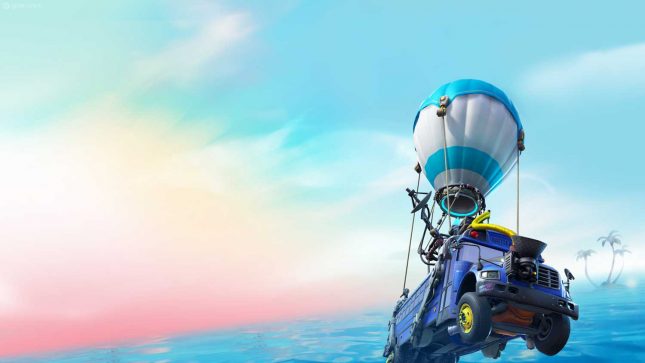 Epic published an animation about a year ago, showing a very similar scene from the image above. Interestingly, in the video, there is a number on the side of the crate for the Flare Gun that corresponds with the June 11 launch date reports Eurogamer.

Considering the launch was delayed twice, the number on the side of the crate is thought to be a coincidence. Speculation suggests that this weekend’s event will kick off with Midas unleashing a device in an attempt to cure Fortnite of its storm.

However, speculation suggests something will go wrong, and heavy rain will flood the map changing things for the kickoff of Season 3. We have a bit over a week to wait before fans know what Epic Games has planned, assuming the season isn’t delayed again.