Fortnite Is Getting Sarah Connor and T-800 Skins

Fortnite has been quite the phenomenon since it launched with huge numbers of gamers and massive profits from in-game purchases. Some of the most commonly purchased items in the game are skins to change how the player’s character looks. Fortnite is adding some new skins from the Terminator franchise to the mix.

The skins include the Sarah Connor skin and a T-800 Terminator skin. Accompanying the skins are back bling and a pickax, all available in the Fortnite Item Shop. Sarah Connor had been teased as coming to the game earlier in the season, and the launch is now official. 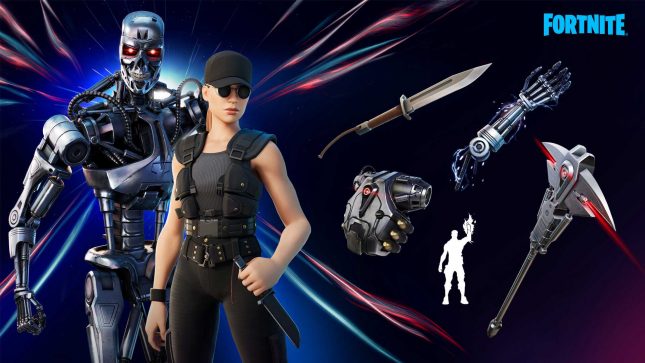 The Sarah Connor skin also comes with two variants. One features a T-800 Endoskeleton Arm Back Bling and a combat knife. The T-800 skin has its own emote, HK Sky Net Uplink Back Bling, and Techno-Grip ax.

The current season of Fortnite has been an interesting one allowing Epic to bring in all sorts of skins from different games and movies. For the season, there have been skins from God of War, Predator, Halo, The Mandalorian, and now their Terminator skins to enjoy. The current season is Chapter 2 Season 5 Zero Point.