Fortnite fans who didn’t login and play the game yesterday missed their opportunity to earn the Daredevil outfit for their character. For those who are somehow unaware of who Daredevil is, he’s the superhero featured in a Netflix series, movies, and lots of comic books.

The event took place on October 14 between 5 PM and 8 PM local time. That meant in each country, the event was going on at a different time. Daredevil will officially land in the game on October 17. Players had the opportunity to win the costume by playing in the marble Knockout LTM tournament. The top-scoring players in each region were given the skin before it arrives in the Item Shop. 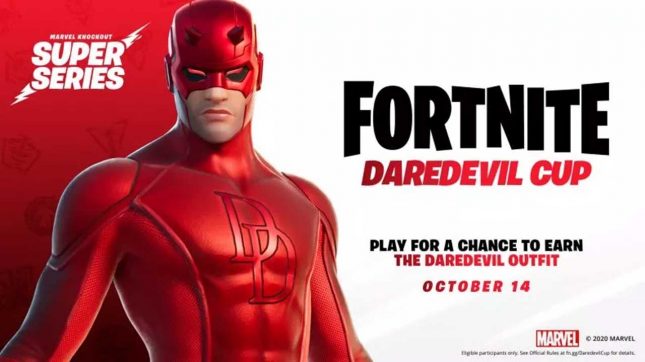 Yes, that means you can still get the skin, but you’ll have to pay for it. Participants played ten matches and earned points based on ladder position. A Victory Royale was 15 points, being in the top two was five points, the top four was two points, the top eight was two points, in the top 16 was one point. First place required 25 points, second 10 points, 35 points, eighth three points.

Many people were able to win the skin during the contest, with 700 having the opportunity in North America and 800 in Europe. Anyone who participated in the tournament earned the Marvel Nexus Glider.