Ford has revealed most of the official details on the Bronco Raptor SUV. Key factoids include that it will use a 3.0-liter EcoBoost engine with special Raptor tuning targeting over 400 horsepower. Ford says it is the most powerful street-legal Bronco ever made and will include cooling and air-induction systems that allow it to endure high temperatures encountered while racing through the desert.

Other key features for the SUV include the ability to maintain highway speeds while flying across desert sand dunes and the ability to low-speed rock crawl. Ford fits the Raptor with HOSS 4.0 race-ready suspension, and for strength, the SUV utilizes a fully boxed high-strength steel frame. The Bronco Raptor comes standard with 37-inch all-train tires. 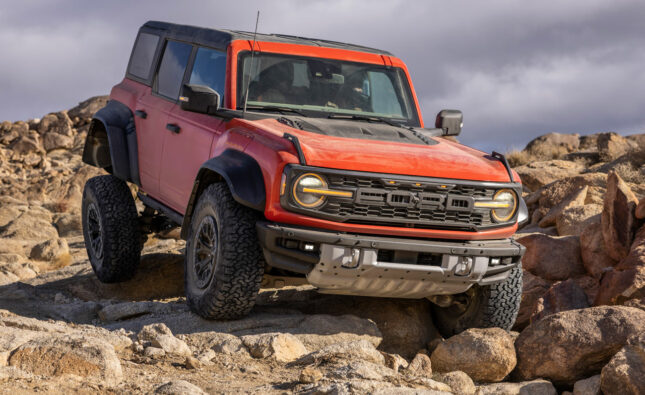 Bronco Raptor has styling that gives it a familial resemblance to the F-150 Raptor. Bronco Raptor is 9.8-inches wider than a base Bronco. Ford has not announced final power numbers or pricing and availability for the Bronco Raptor at this time.