Folding on the Intel V8 – Eight Cores of [email protected]

Many of you probably remember our Intel V8 preview that showed some serious processing power. Instead of just letting a system like this collect dust, we have put this system to good use running Folding @ Home for Team 38296. We set out to see just how many points per day we could get with such a beast using various configurations featuring the Linux SMP client, Windows SMP client, ATI GPU Client, and VMWare. 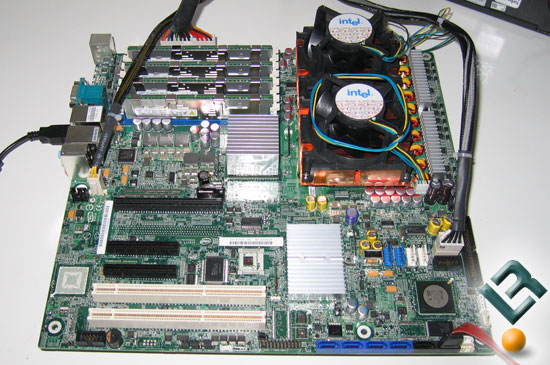 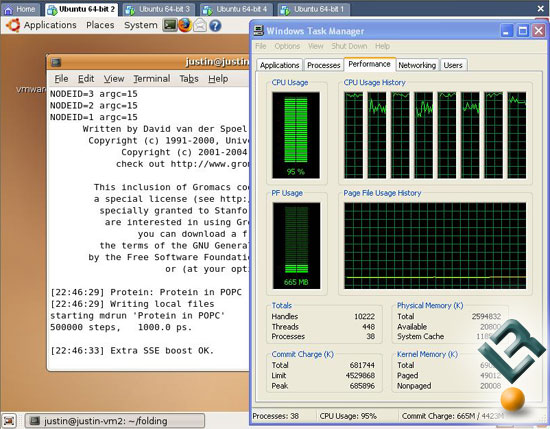 Each configuration was run for 7 days and then the average points per day was recorded.

Many of our folders have found that running 64bit Linux in a Virtual Machine (VM) yields more points per day than running the Windows SMP client. However, most of those folders only have a dual core processor. We discovered that VMWare Server only gives you the option to set a max of two cores to a given VM. So in order to use all 8 cores in VMWare, we had to create 4 separate VMs running Ubuntu 64-bit Linux on top of Windows XP 32-bit. We dedicated 1 GB of memory to each VM as well.

3. Three VM’s running Ubuntu 64-bit with the Linux SMP Client and one instance of the GPU Folding Client

We decided to get a little creative with this setup. We ran 3 VMs running Linux and also ran the GPU Folding Client on our ATI x1950XTX 512MB Crossfire Edition video card. When watching the system monitor with this configuration, the system was under a steady 95% load, so we didn’t run another folding client to have the system at 100% load since there didn’t seem to be enough processing resources available.

4. Two instances of the Linux SMP Client on Ubuntu 64-bit

It was then time to wipe the drive and install Linux natively. Like the Windows SMP client, a single instance of the Linux SMP client only put load on 4 cores. So two instances were run. 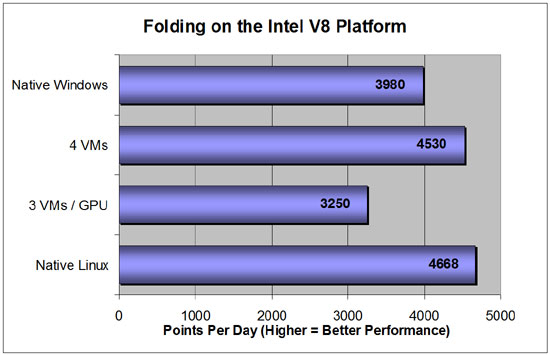 First off, 4600+ PPD from a single system is pretty damn impressive!

Notice how many of our folders were dead on when they claimed that even while running in a virtual machine, the Linux SMP client noticably out performs the Windows SMP client!

We were also surprised at how low the PPD was for a GPU Work Unit. 1 WU was taking the X1950XTX about 12 hours, so we were only getting about 660 PPD out of the GPU. This is nowhere near the 1130 PPD we were getting out of the fourth VM on two cores. Needless to say, we were not impressed with the GPU client from a performance perspective.

Last but not least, eliminating the overhead of the VMs and running Ubuntu 64-bit natively improved performance even further, but only by another 130 PPD.

Legit Bottom Line: The Intel V8 Platform cranked out some serious [email protected] points in a short amount of time, and if you want to get the most out of your system, run Linux!