Ferrari J50 Anniversary Special Is Available To Purchase In Japan

Typically when you buy a new car, they depreciate in value quickly, but that’s not always true. There are some iconic sports car brands that appreciate in value, such as Ferrari. One example of appreciation in an extremely rare Ferrari model is this 2016 Ferrari J50. The car is based on the 488 Spider and was built in 2016 to celebrate 50 years since Ferrari launched in Japan.

Only ten units were built, and each was highly customized to the ten lucky buyers desires. This particular version is covered in black, known as Nero Daytona by Ferrari. It has a black interior with lots of carbon fiber tidbits on the inside and out. The styling of the vehicle was changed compared to the regular 488 Spider, and the 3.9-liter twin-turbo V-8 has more power. 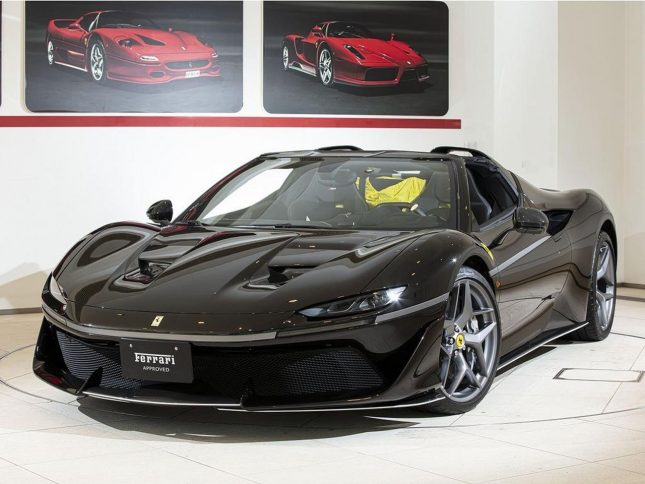 Ferrari tuned the engine to produce 681 horsepower, a gain of a most 20 horsepower compared to the Spider. The standard seven-speed DCT transmission carried over. This particular unit has only 430 miles on the odometer and could be yours for the equivalent of $3.6 million.

That price is a nice gain compared to the between $2.7 million and $3.3 million the cars cost new with pricing varying depending on the level of customization. With only ten cars made, odds are its value will continue to increase over time.