This year at IDF, all the buzz is surrounding the 45nm processors and Intel is showing off a number of systems with the Intel X38 Express chipset and these new 45nm processors in an overclocked environment. The processor we saw being overclocked was the quad-core version of Penryn, codenamed Yorkfield, and features a 820m transistor die (it is more or less a pair of Wolfdale dies, which each feature 410m transistors) and a 12MB of L2 cache. The processor we had a chance to see overclocked was a 45nm Yorkfield that was setup to run at 3GHz at default.

UPDATE 9/18/07 4PM PST:  Intel has announced the name of this 3GHz Yorkfield processor, so this overclocking was done on the Intel Core 2 Extreme QX9650.  This will be the first Intel Extreme processor in the 45nm Quad-Core series. 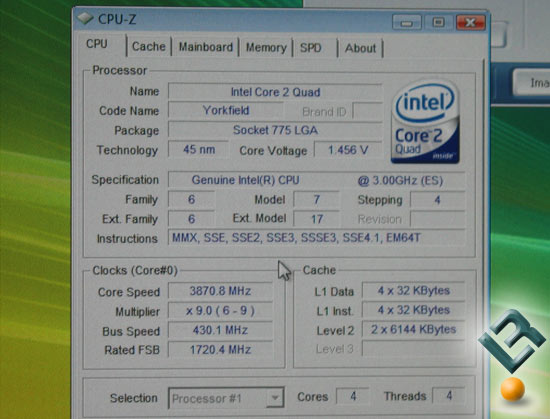 With the multiplier left at 9, the test system was able to be cranked up to 3.87GHz with ease, which is impressive for early silicon and surely an early pre-production BIOS version. Note the massive 12MB L2 Cache and the support of SSE4 in the above CPU-Z 1.41 picture. This is impressive, knowing that down the road this frequency will only go higher once these processors are in the hands of overclocking enthusiasts. 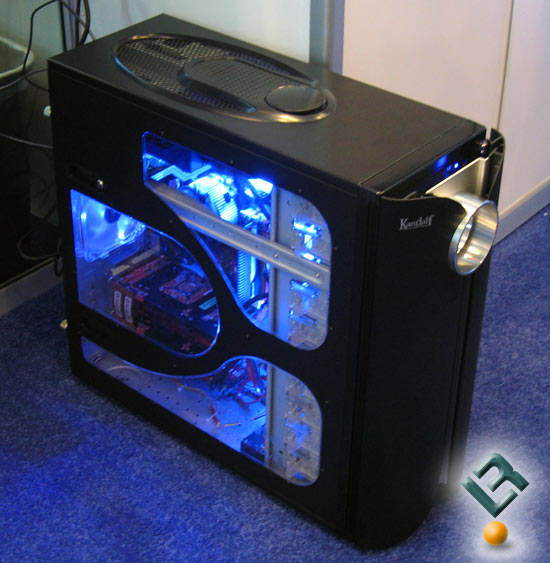 The demonstration was setup on a system running a pair of ATI Radeon HD 2900 XT graphics cards in Crossfire on the yet to be released Gigabyte GA-X38T-DQ6 motherboard that uses the Intel X38 Express chipset. Once we got a little closer to the test system, we noticed something a bit strange. 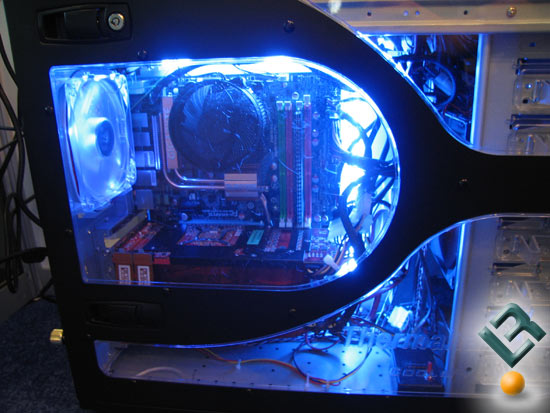 After looking close at the test system we saw something good and something bad.  The good news is that this 3.87GHz beast is air cooled with a heat sink that is ‘normal’, which means overclocks like this should be easy to reach with aftermarket cooling.  The bad news is that the test system was only running in single channel mode, which seemed a bit strange.  The Gigabyte GA-X38T-DQ6 motherboard uses DDR3 memory and Intel had a sole Corsair XMS3 DOMINATOR memory module installed running at 880MHz (1760MHz) at 8-8-8 timings, which was a shock.  Recently, I personally reviewed the Corsair 1800MHz DOMINATOR CL7 DDR3 Memory kit, which easily hit 1920MHz with 7-6-6-20 1T timings when I overclocked a kit on the P35 chipset. I asked Intel about the use of single channel memory and they stated that DDR3 memory is holding back the overclock and for stability sake a single module was used. I’m not really buying that as hitting 2GHz on DDR3 memory is possible on the P35 chipset, so hopefully this is a BIOS issue and not a chipset issue.  Then again, the X48 Express chipset that is coming out after the X38 Express is said to have a number of DDR3 memory improvements and clock speeds is one of the enhancements…

Other than the talk about memory, Intel informed us that they were able to hit 4.1GHz with water cooling, but wanted to show 3.87GHz on air cooling as that would be more impressive to many of attendees of the Intel Developer Forum.  It seems 450MHz FSB is a good overclock with water and 430MHz FSB is to be expected with air cooling.

Paul Otellini said this morning in a keynote address, that the first of 20 unique processors to make up the Penryn family will launch on November 12th, so if you want one you’ll have to wait a bit longer. If you are wondering what performance is like be sure to check out the article on Penryn Benchmarking.