In early May Legit Reviews posted an article that covered UTT memory IC?s . After getting feedback from our readers, it was determined that further explanation was needed on the different types of IC?s that play a roll in the Value memory market. Since the value memory segment makes up the vast majority of memory sold on the market it is important to understand the DRAM options that are available to the memory companies and consumers. If you are a system builder then this article should be of interest as it would be beneficial to know what you are buying and selling to your customers.

For high end memory modules many memory companies use branded IC’s that are built on full data sheets and are fully tested to their needs before they receive them. If a memory company chooses not to use branded IC’s then they can use several different types of unbranded parts. The three major types of IC?s to select for value memory are; ETT, UTT, and downgraded DRAM. Right now UTT and ETT modules are starting to make a buzz in the DIY computer industry, so let’s take a closer look at these memory types.

When it comes to pricing the difference from a branded DRAM and an unbranded ETT DRAM is very similar. The average price for an ETT 256Mbit DDR-400 part was US$2.57 from July 12-19, while branded parts for the same density averaged US$2.69 in price, a price gap of only US$0.12. While the price difference is not that great between a branded and ETT DRAM’s it does add up over time. With the larger memory companies producing millions of modules a month this would add up over the fiscal year.

Most UTT and ETT comes unmarked like these UTT IC’s from Winbond that were found on Mushkin’s Redline XP memory series on the module below. 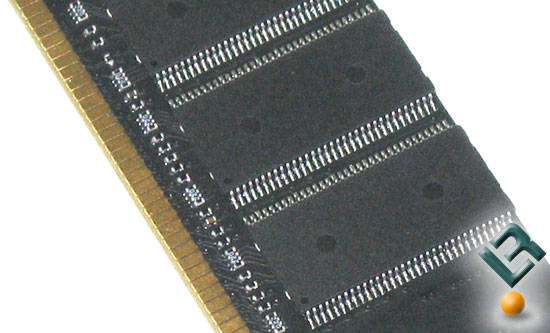 Traditionally the downgraded DRAM parts became “application specific” DRAM used in less demanding electronics like CD/DVD players, Toys, etc. We see this DRAM coming from the semiconductor companies under names many are not familiar with. They have even created new brands to market under so they don’t tarnish their other brands, below is an example of some. While hopefully you know companies like Micron, I doubt many know about Spectek who sells their fall out parts.

For the past decade selling untested memory modules was nothing more than a quick way to get rid of bad parts. Now if you look at the Taiwan DRAM manufacturing process you will notice that the companies are building more DRAM?s than they can test. Since there is a wait for modules to be tested memory companies are stuck with parts in-house and we all know that products in the warehouse are not making profits for anyone. The Asian semiconductor companies are now not even trying to test in-house and are dropping the DRAM?s onto the spot market or selling them to third party to keep the parts from sitting in a hold pattern. By skipping testing semiconductor companies can move products faster and module manufacturers save money by buying these untested modules. It is a quick and profitable fix to getting inventory to the street quicker than previously possible.

To make things even more confusing every semiconductor company manufacturers and tests differently. This makes it hard to compare different DRAM types between companies because it would be like comparing apples to oranges. Everything boils down to testing on the wafer lots. By skipping testing, module manufacturers can purchase DRAM much less and the semiconductor companies can move product off their lines faster. Once again think about how to maximize profits and this is what is being done.

Hopefully now you know what ETT and UTT based memory modules are and what the difference between the two types of DRAM is. The trend is now set and with production increasing and testing decreasing the UTT memory IC’s look to be they way of the future from here on out.