This week the Epic Games Store has announced some updates, including self-service refunds. The addition of self-service refunds makes it easier for players to get money back on games they didn’t like. Returns will be available on qualifying purchases online. When users sign into their account on the Epic Games website and click the Account drop-down in the top right corner of the webpage, they can go to the Transactions tab, and click on a game title.

If the game is eligible for a self-service refund, the refund option will be there for users to click. All games are available for a refund within 14 days of purchase for any reason. One caveat is that the gamer can’t have played the game for more than two hours. 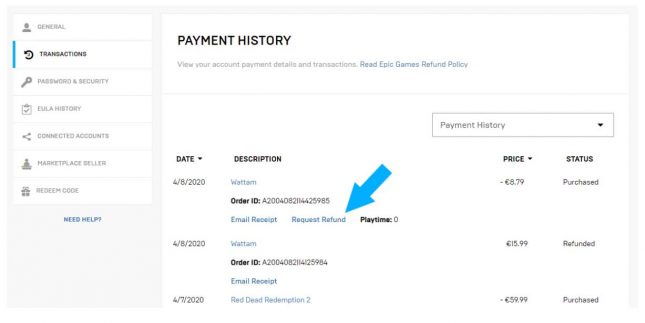 Epic won’t offer refunds on games that the player has been banned from or games where they have violated terms of service. Epic also says players may not be eligible for refunds if it determines they’re abusing the refund policy. The refund will be made to the payment method used to make the game purchase. Other changes being made include changes to Ownership Authorization.

Epic says that the ownership authorization occurs earlier in the launch process and informs players if their account does not own an installed title being launched. Players will be greeted with a message telling them to purchase the game if they want to play it. Epic also announced partnerships with third-party digital sales platforms, including Fanatical, Green Man Gaming, and Genba Digital, to offer keyless purchases for Epic Games Store titles.