The EKWB velocity series of CPU water blocks is EKWBs latest and greatest edition to their already heavily extensive line of watercooling gear. The Velocity lineup of waterblocks improves on the previous generation of water blocks in a few aspects. One of the main improvements is in aesthetics. EK has decided to stray away from the blocky, and square shape of previous generations like the Supremacy EVO lineup. They are now taking a more modern approach resulting in smoothed out edges, sloped sides, and less flashy inlet/outlet ports, all adding to the overall look of the block. Complementing the design changes are many different configurations of the EK-Velocity block.

Like previous series you can choose what type of finish your blocks come with and EKWB has 18 different EK-Velocity models ranging in price from $79.99 to $109.99. The base copper models run $79.99, moving up to nickle plating will run you $84.99, adding RGB lighting with a standard 4-pin 12V RGB header bumps the price tag up to $99.99 and finally if you are wanting an RGB model with a standard 3-pin 5V D-RGB header the price tag jumps up to $104.99 to $109.99. After picking an AMD or Intel block you then get to choose from Acetal or Plexi top plates on most models or opt for a full nickel design at the highest price points. EKWB offers a block for everyone and the RGB lights are compatible with RGB Sync technologies from all the main motherboard makers. ASUS AURA Sync, ASRock POLYCHROME Sync, Gigabyte RGB Fusion and MSI Mystic Light applications will all work with the EK-Velocity RGB models. 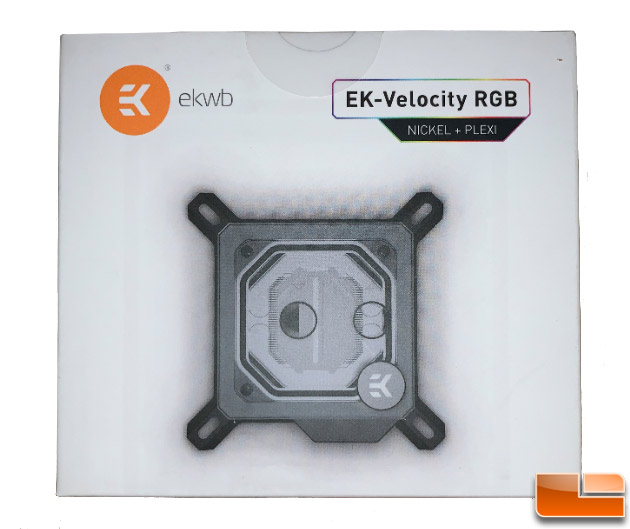 The model that we will be reviewing today is the EK-Velocity RGB – Nickel + Plexi and I’m going to be using it to bring my cooling loop to the next level. The lighting in the RGB model is one of the most interesting aspects of the whole block because EK has managed to fit a whole perimeter of LEDs, a total of 24 on the inner portion of the block. Though these LEDs aren’t individually accessible, which may be a bummer to some, the overall peak brightness makes up for it.

Here is what EKWB has to say about the new EK Velocity:

The purest copper available on the market is used for the EK-Velocity cold plate which is precisely machined to a dense micro-fin structure. The contact surface itself is machine polished for a better contact with the CPU IHS. This version of the water block features a nickel-plated copper cold plate with a CNC machined high-quality glass like Acrylic top piece.

The new cooling engine is characterized by the top-integrated jet nozzle which is combined with a thicker jet plate allowing a more precise bow control. The simplified water block structure offers a more optimized coolant flow and easier maintenance, while the interchangeable thick jet plate ensures the best contact surface for mainstream and HEDT Intel platforms.

The block is equipped with a reinforced hold-down bracket, and the enclosed mounting kit includes all the necessary mounting screws, mounting springs, rubber backplate gasket and a small tube of Thermal Grizzly Hydronaut high-performance thermal paste. 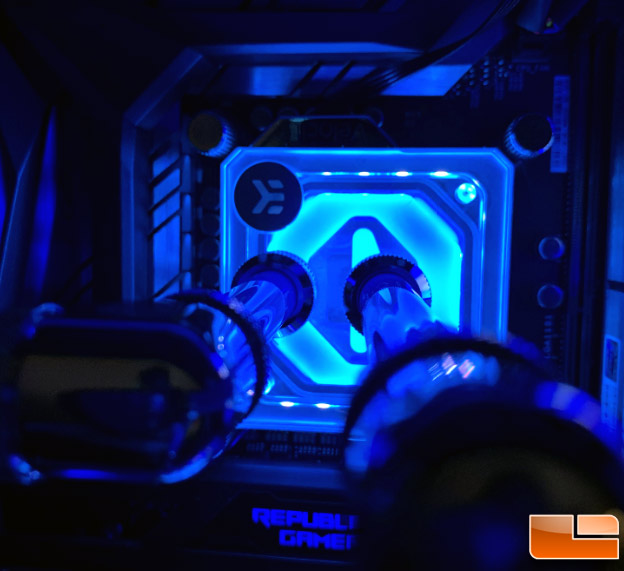 On full brightness I can easily light up my whole case, and even a portion of my room. The EK velocity block is currently supported on both Intel and AMD platforms but keep in mind that the mounting hardware is tied to the block you buy. So make sure to keep an eye out for the title of the block, and dont just buy the first one you see. Supported out of the box on the Intel side is the LGA-115x and LGA-20xx sockets, and on the AMD side is the AMD AM4 socket, and if you want to know extra compatibility, EK has provided a compatibility sheet. These lists are helpful, but hasn’t been updated in over 3 months and might not include all compatible motherboards.

4C is definitely an improvement, but is it an improvement that makes a difference? Id say not, however I did notice that during my new tests my fans never ramped up to a noise level that i would consider obnoxious. With the EK-Supremacy EVO in the loop, my fans would sound like a jet engine. So, the most notable change in daily life from switching waterblocks is that the system runs quieter at load thanks to the lower temperatures. Keep in mind that ambient temperature stayed constant at 68 Degrees Fahrenheit (20C). The temperature drop is no doubt due to the new cooling engine inside of the velocity block. The refined engine is supposed to be more efficient, and lead to a more direct flow over the cold plate, with the help of a thicker jet plate to help shave off CPU temps 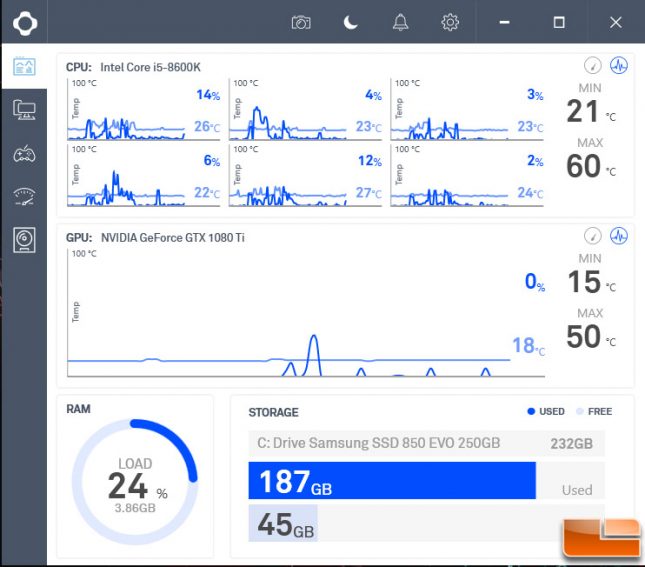 Final Thoughts and Conclusions: EK-Velocity series water blocks are part of the EK Quantum Product Line and is the flagship CPU water block for EKWB.

My only grip with the EK-Velocity is that it didn’t come with a physical installation guide. The physical pamphlet was ditched and replaced with a scannable QR code that needs to be scanned with a mobile device. I liked the idea at first, but overtime when i needed to look back at the instructions for something I found it a pain. The EK-Velocity instructions are also available online and you might want to print them out to have handy before installing the block.

At the end of the day, all the added improvements that come jam packed in this block make it a great block. I upgraded to it from the EK-Supremacy EVO and found it to be very worthwhile as it improved thermal performance and reduced my noise levels. You can buy one of these water blocks for your open loop water cooler directly from EKWB or on Amazon.

The RGB lighting was great, but you can save yourself a few bucks by not getting the RGB version if you dont have the need for a fancy RGB light show. If you enjoy making your PC look like its from the future, and care about the aesthetics of your build, then pull the trigger and buy it. Overall i’m impressed with the improvements made by EKWB and i’m excited to see what comes next. I think my current build looks amazing and am very happy with this block.

Legit Bottom Line: The EK-Velocity CPU water block performs great and the RGB models look amazing thanks to 24 LEDs housed around the shroud! 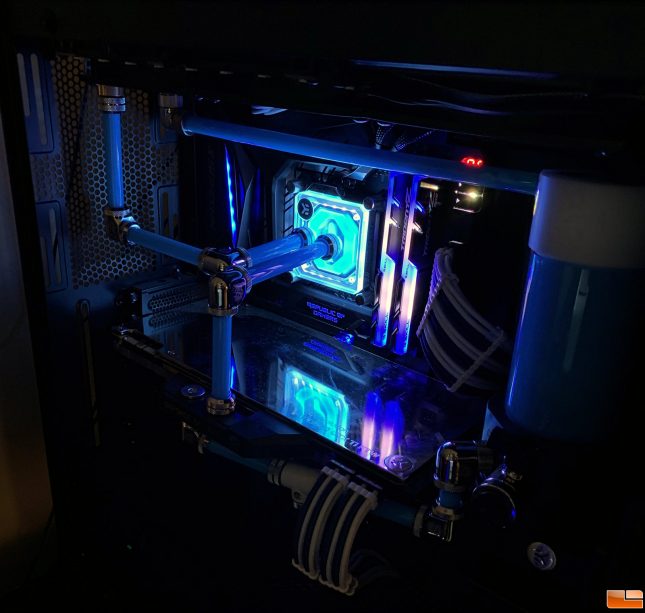