We started off the simple procedure of hooking our system up by connecting the Apple TV directly to our receiver using an HDMI cable that Apple didn’t feel they needed to include in the box bundle.  Now, we have plenty of HDMI cables lying around the Legit Bunker, but most people don’t.  So when they break open that tiny box expecting to be able to watch the player right away, they will have to go to the store and pick up a HDMI cable, or unplug an existing HD device.

For those who may have older TVs or monitors with DVI or Component inputs only, you are again out of luck as you will need to get a converter cable or adapter.

“I’m cool with updating all of my tech, and I’ve got extra HDMI cables around,” you say, “I’m going to be alright. This is still a great box!”

Well, let’s take a quick look at the specs:

Wait a minute…you mean to tell me that this thing doesn’t natively play AVI, ISO, nor MKV files, and the MP4/MPV files it does play only play in 720p resolution???

It’s getting harder and harder to sell this box to anyone other than Steve Jobs. 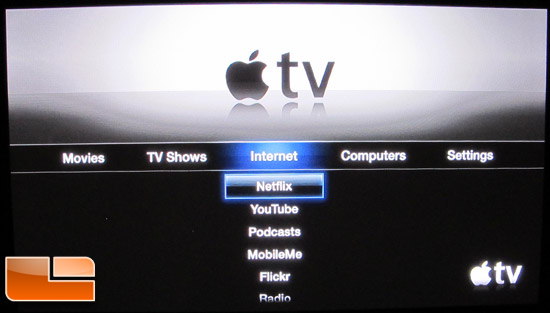 Even if you are the most staunch Apple fan, you have to admit, this Apple TV (Gen 2) model makes no sense from a consumer’s perspective.  Instead of making a device that can recognize and play all sorts of multimedia formats, Apple would rather you run selected media formats through iTunes at a crappy resolution.  When you look at what Netflix offers for the Apple TV it makes you throw up in your mouth a little.  The Apple TV Gen 2 hit the streets about the same time as the Iron Man 2 release, but when we went to stream this recent release, we couldn’t find it.  There were plenty of other “recent releases” listed in Netflix like Friday starring Ice Cube and Alvin and Chipmunks….Come on, Alvin and the freaking Chipmunks as a new release???  Get out of here. Netflix customers pay at least $10 a month for the ability to stream Netflix’s latest and this is what I get? 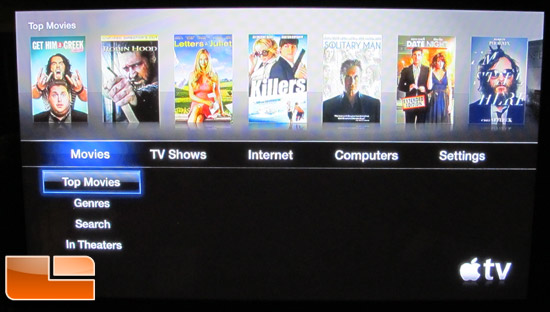 When we finally did find something to play, the picture quality of what was offered was pretty crappy.  We didn’t purchase any movies or television shows from the Apple TV “store” so we cannot tell you if there is a big difference in picture quality versus Netflix.  There were a bit too many ‘standard definition’ titles for my taste though. It is no surprise that when we compared a Blu-ray with Netflix, the Netflix picture was blown away by its more traditional cousin.  We also compared the Netflix picture quality on the Sony PlayStation 3 and Apple TV and the Apple still sucked.  For people with television sets under 42-inches or so, the picture quality may not matter, but when you compare the Apple TV to any other media player out there, it gets its butt kicked when you take into consideration picture quality and format compatibly. 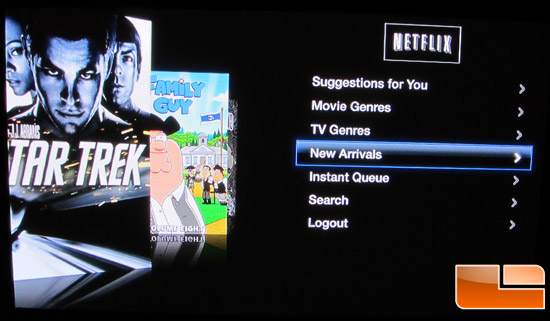 Again, who would pay for the Apple TV?  Only people who are already married to iTunes to play all of their media files and who can keep their PC or Mac running with iTunes at all times will be happy with this solution.  For the rest of us, it’s really stupid having to re-encode every file we have on our system to H264 or M4V.  Again, you can use programs like Handbrake, MakeMKV, or Super to convert the files you have before watching them, but if you have a collection of ripped DVDs or home videos, you will spend the majority of your time converting files, not watching them.  For the majority of users out there, this is a non-starter and it is one of the reasons that non-Apple users point and laugh at Apple users.  There are way too many (and better) alternatives to the Apple TV. We put together a simple chart mapping out some of the most common features for media players.  The results are below (click for larger version): 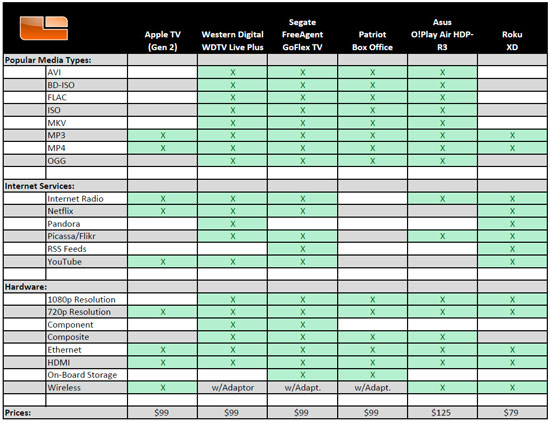 From just this quick look, we can’t even give Apple TV box the award for “Best Wireless Netflix Box That Is Under $100”.
Questions or Comments? View this thread in our forums!
Jump To:
« Prev 1 2 3  Next »