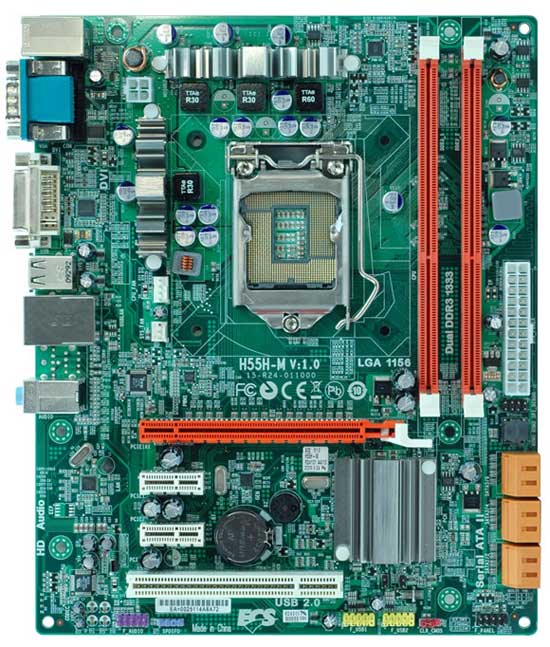 The ECS H55H-M motherboard brings the new Intel H55 Express chipset to their lineup.  It is a small form factor board, so it is a board that you will look at for a nice HTPC setup.  Pair this with one of the newest Intel core i3 or i5 Clarksdale processors with integrated graphics, and you already have the big three pieces of hardware that you will need for the setup of a new system.  We intend to find out if the performance of this little board would be worthy of placing this in your next system.  Before we look at the board, let’s get a quick overview of the new chipset:

As you can see, the Intel HD graphics are on the CPU itself.  Though the board looks like it will have onboard graphics because the connections available on the I/O port, it actually does not have any GPU on the board itself.  So, if you are building a system around this and you have, say, an i5 750 like we use here in the review, you still have to have a graphics card.  You must have a Clarksdale CPU from Intel to get the graphics capability without an add on card.

Now, let’s take a look at the motherboard and its specs…

ECS also has a couple of features worth at least mentioning here.  eJiffy is a way of fast booting into a Linux environment to get connected to the internet quicker.  We have looked at other similar features from other board makers, and I am not too sure that this is really that useful of a feature for most, but someone may like it.  They also have what they called eBLU (BIOS Live Update), which is a very useful tool to quickly and easily update your BIOS online through ECS servers.  I personally like being able to do this as it beats the old DOS method any day of the week!