When most of our readers hear the name ECS, they automatically think of low cost entry level boards that are aimed at the budget minded consumer who just wants a computer.  For years LR has tried to work with ECS to do product reviews, but they never wanted to market their boards with the online enthusiast sites.  Early last month we recieved a phone call from ECS saying that they want to enter the enthusiast market with some new innovative boards.  They went one step further and shocked us even more by letting us know that they were getting some of the key press members together out in San Jose for an Editor’s Day to be briefed on the upcoming changes.  We were promised on the phone that ECS is “NEW” and that they would show us the new company direction when we arrived.

ECS has steamed along, filling the needs of basic system builders and the DIY crowd with entry level motherboards.  By doing this ECS has become the third larget motherboard maker in the world.  They currently have 9,563 employees around the world (8,000 of which are in China) and make an amazing 20% of the worlds motherboards.  ECS is currently producing 2.2 million motherboards each month and has the ability to increase to 2.5 million per month before adding any additional manufacturing lines.  When LR asked ECS about future growth they stated that they have more than enough space and can add additional EMT lines without needing new facilities, but are opening a new location just in case. The new location will be tech district of Taipei, Taiwan and is going to be opened in 2006 when contstruction is finished. ECS currently has 69 EMT lines running to keep customer orders filled. 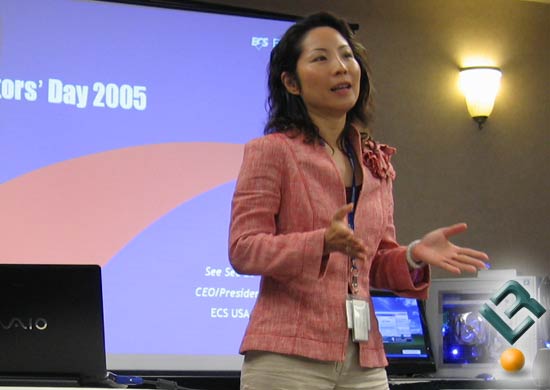 Our day with ECS started off with an introduction of the company and a briefing by See See Lo, the CEO/President of ECS USA.  After the traditional opening comments she informed the press that radical changes were coming from ECS.  She refered to the addition of higher end enthusiast product sku’s would be a “coming out party for us” with a smile on her face.  She also stated that “ECS is poised to move forward to achieve our goals in the next 12 months”, which means the transition is going to take place quickly and has already begun. From the sounds of her opening comments this is something ECS has been planning for a long time and they were happy to try something new.