While walking the show floor this week at the Electronic Entertainment Expo (E3) we spotted the ABIT Fatal1ty Professional AN9 32X motherboard on display for all to see.  The AN9 32X will be the upcoming enthusiast board from ABIT that is based on the NVIDIA nForce 500 series of chipsets, which is the first NVIDIA chipset to support AMD’s upcoming AM2 processors. 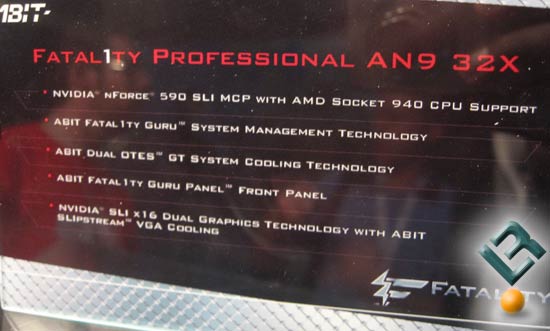 According to the product information slip that was in the glass case next to the board we were looking at the ABIT Fatal1ty Professional AN9 32X motherboad for upcoming AMD Socket AM2 processors.  The AN9 32X utilizes the NVIDIA nForce 590 SLI MCP with the AMD Socket 940 (Socket AM2) CPU support.  It also features ABIT Fatal1ty Guru system management technology and ABIT’s dual OTES GT system cooling technology.  Thanks to the nForce 590 chipset the board supports NVIDIA SLI x16 dual graphics technology with ABIT slipstream VGA cooling. While that is what the sign says, let’s take a closer look at the board and see what else is going on. 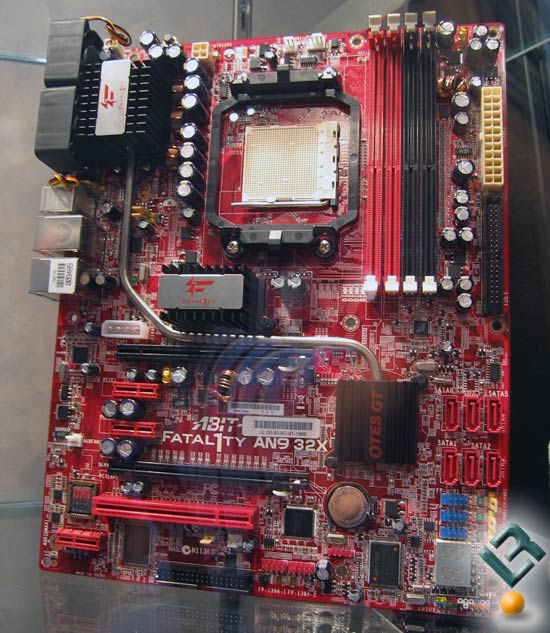 Looking straight on the board the first thing we noticed ws the support of six SATA headers!  It was also noticed that the board only has a single PCI slot.  While for some this might be a feature that will never be used, others might be considering the AGEIA PhysX physics processing unit for their next system built.  If you run SLI on the ABIT Fatal1ty AN9 32X with a dual slot cooling soluution that the PCI slot will be blocked.  This is something that we couldn’t help but notice on the board. ABIT kept their cooling solution the same as the AN8 32x SLI (our review) and reduced the IDE support to just one header (two channels) on their upcoming AN9 32X motherboard.

ABIT recently sent a press release (ABIT & Fatal1ty at E3 2006) out and had this to say about their motherboard:

It looks like ABIT confirmed that the board is running DDR2 memory at 800MHz out of the box and the buzz around the booth is that the board would allow for much higher overclocking with no problems. 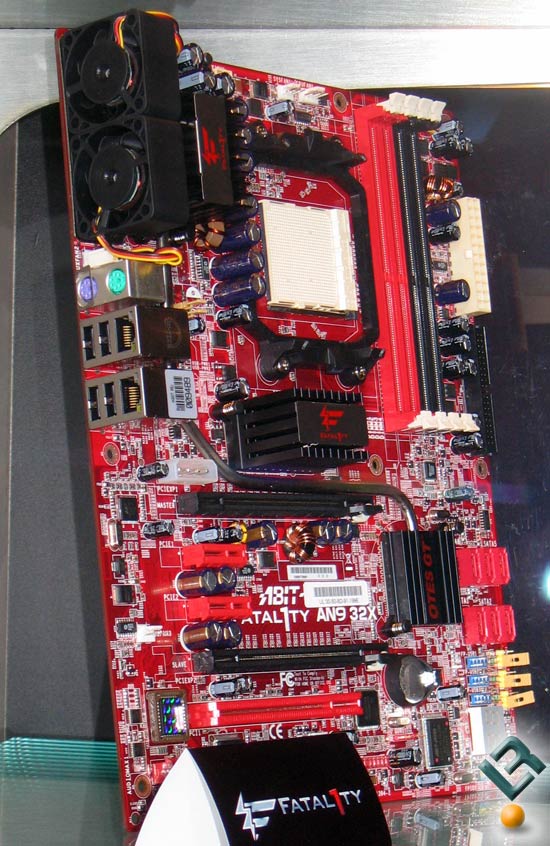 Taking a look at the AN9 32X at a different angle we can see the back I/O panel and notice that it too is identical to the previous AN8 32X SLI motherboard!  After looking at the ABIT Fatal1ty motherboard in the window for several minutes it look forward to the upcoming AMD socket AM2 processors and it seems that AMD, NVIDIA, and ABIT pulled off a fairly robust motherboard with the AN9 32X motherboard.  After looking at the pictures I’m sure gamers and enthusiasts are wondering when they can purchase one of these bad boys and the answer to that is very soon. 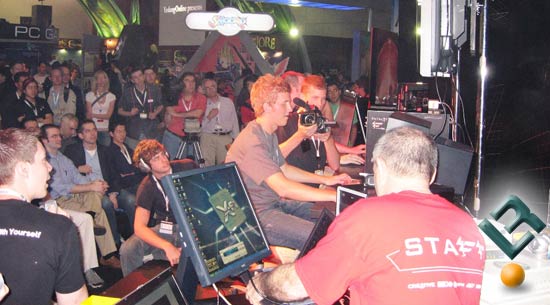 In closing I’ll leave you with a picture from the show where Jonathan (Fatal1ty) Wendell put the smack down on dozens of people in another shoot out.  I wonder if his machine had the ABIT Fatal1ty Professional AN9 32X motherboard in it!