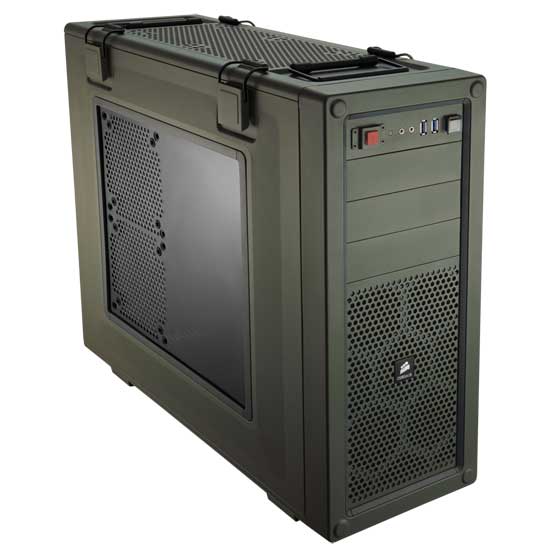 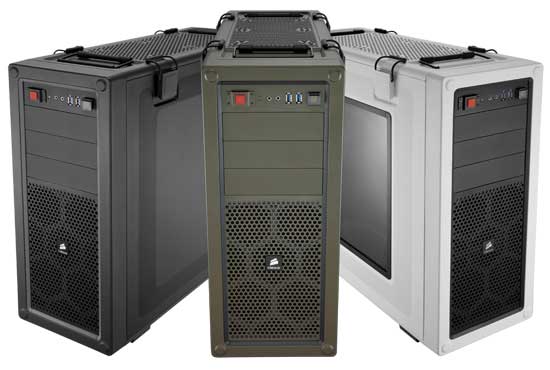 Now Corsair has introduced the Vengeance Gaming line of products that includes cases, mice, keyboards, and headsets. We have already looked at the Vengeance 1300 Headset and the Vengeance K90 keyboard and M90 mouse. Today we have the Vengeance C70 case. The Vengeance C70 was designed with gamers on the go in mind. The entire case, including the front bezel and bay covers, are made of steel. The C70 case series is available in three colors:

The Vengeance C70 features a high air-flow design. It comes with three 120mm fans, but has room for up to 9. There is also space at the top for a 240mm radiator to accommodate coolers like Corsairs H100. There are six 2.5/3.5” hard drive bays and 8 expansion slots. The one of the drive cages can be removed to make room for a second 240mm radiator in the bottom of the case.

The style of the Vengeance C70 is military inspired. The latches for the side panel look like those used on ammo cans. For helping the traveling gamer the Vengeance C70 comes with two carry handles on the top of the case. These have springs to hold the handle to the case so they don’t flop about in transport or rattle when the system is being used. Front panel switches even have military feel to them. The reset switch has a flip-up cover you have to raise to access it.

Before we get to much farther let’s take a look at the specifications for the Vengeance C70. Today we have the Military Green version.

Specifications for the Vengeance C70