When it comes to upgrading your laptop for better performance you’ll quickly learn that upgrading the hardware inside your laptop is easier said that done. The exception to this is usually that the memory modules (DRAM) and storage drives in a laptop are upgradeable. One of the easiest and least expensive upgrades has always been the memory. Upgrading the memory in a laptop takes just a few minutes and requires no BIOS setting or driver changes, so it is an entry level task that anyone can perform with relative ease. The nice thing about a memory upgrade it that you can kill two birds with one stone. For example you can increase the amount that you have and also the clock speed of the memory for improved performance.

When it comes to computer memory, there are dozens of companies out there fighting for your hard earned money. You’ll see memory modules with catchy names and flashy heat spreaders, but at the end of the day you want something that works properly and is reliable. For that there are just a few companies to turn to and one of those is most certainly Corsair. Corsair, has been building memory designed for overclocking enthusiasts since 2002. Over the past 10 years the company has developed a proven track record of being able to launch amazing memory products and in recent years they have expanded to power supplies, cases, CPU Coolers, Solid-State Drives (SSDs), speakers, cooling fans, gaming keyboards, mice and more. 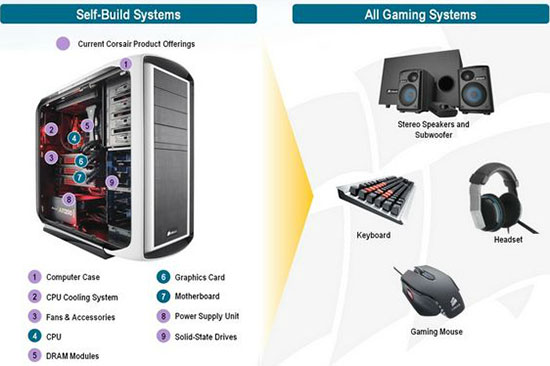 Corsair now makes six of the nine key components used in gaming PCs and that represents nearly 50% of dollar amount that enthusiasts spend on gaming PCs. That math doesn’t include the peripherals that Corsair now sells as well. That means that over the past 10 years, Corsair went from building some of the best enthusiast memory available on the market to more than two-thirds of the components that a DIY system builder would need to create the ultimate gaming system! Corsair has literally gone from a one trick pony to a company that does it all! 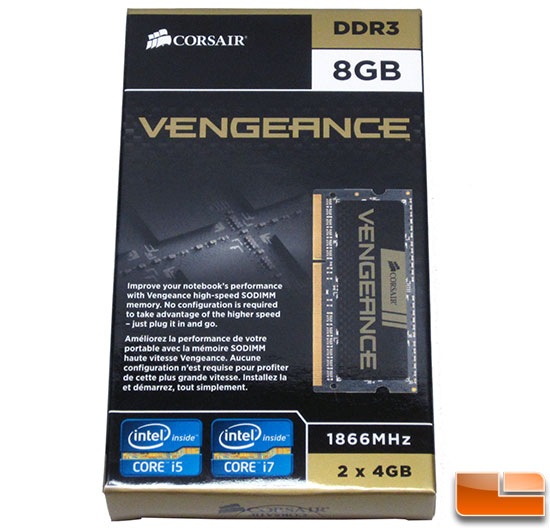 Last week we published a benchmark review about how Blizzard’s megahit Diablo III runs on AMD and Intel laptops and that article was read by tens of thousands of people including some Corsair employees. We know that for a fact because Corsair reached out to us and offered to send out a Corsair Vengeance series laptop memory kit to boost our laptops performance. The very next day we received the Corsair Vengeance 8GB 1866MHz CL10 memory kit for our ASUS N56VM laptop. This laptop already came with an 8GB kit, so we weren’t gaining any extra memory capacity, but the OEM memory kit was running at 1600MHz with CL11 timings. The Vengeance high-speed kit was running 1866MHz with CL10 timings, which means we are going to get a nice 266MHz boost to the memory bandwidth thanks to the higher clock speeds and tighter memory timings.

How much will a high-performance enthusiast memory kit like this cost you? Computer memory is not as expensive as it once was, so if you haven’t upgraded your memory in recent years you might be in for a nice shock. Corsair currently offers two dual-channel Vengeance memory SODIMM memory kits for laptops. Both are 8GB kits (2x4GB) but one is rated at 1600MHz and the other for 1866MHz. There is right around a ~$30 price difference for these two kits. 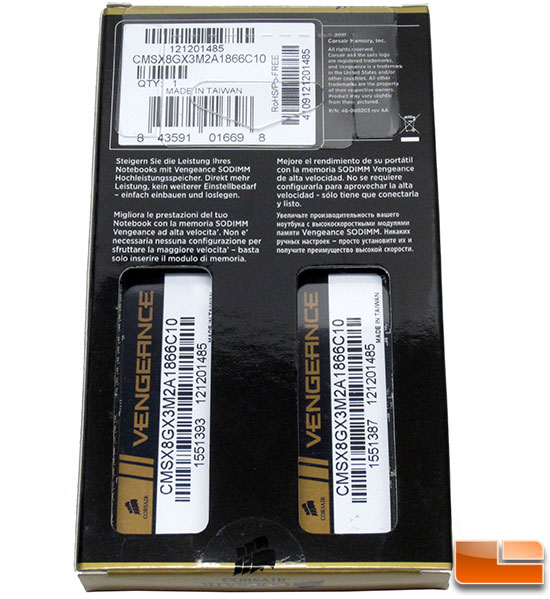 Corsair sent out their flagship Vengeance SODIMM kit, which means we got the 8GB 1866MHz memory kit. This memory kit is super easy to use as it comes with all the memory timings pre-configured in the SPD settings. All you need to do to install it and get a performance boost from your laptop is remove the old ones and install these! 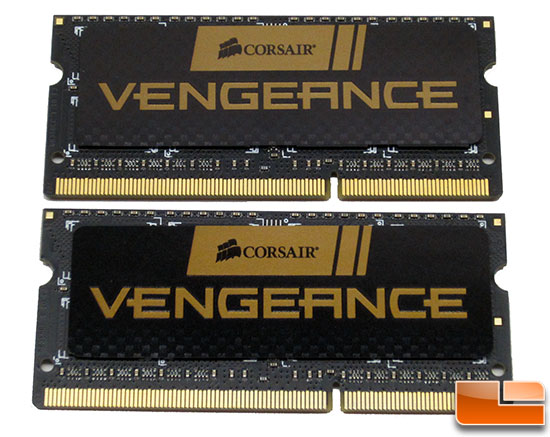 The front of the Vengeance 8GB SODIMM kit has nice looking stickers that have a touch carbon fiber along the bottom edge of the image. The black PCB and gold colored logo and SODIMM pins make for a menacing looking module. 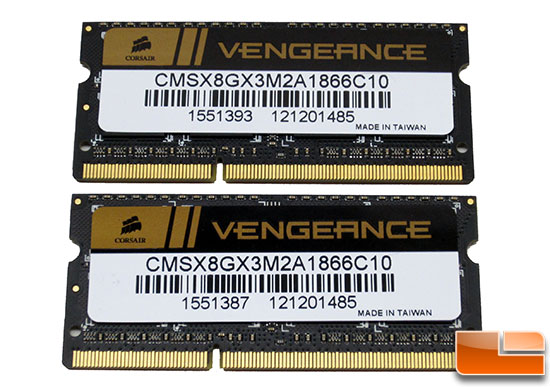 The back of the Vengeance SODIMM modules has a sticker across the front that clearly shows the part number of the module, individual serial number and the batch number. Corsair pretty much covered the entire module with stickers on both sides, so we can’t see what memory ICs the company is using. 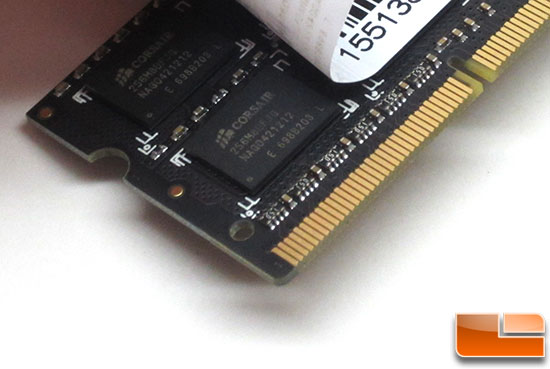 We tried to peel back the sticker to see what IC’s that Corsair was using, but as you can see they have Corsair’s logo laser etched in them. They could be Hynix or a number of other DDR3 IC’s.