Although I have not tested any other gaming mice with the 3327 optical sensor, I found it to be pretty accurate with the M55 RGB Pro during my tests. The sensor showed no acceleration, and did not have any trouble tracking while editing the pictures for this article. I used the mouse at a DPI of 1200, so 12,400 DPI was more than enough for what I was doing. The lift-off distance was a bit high though. With a lift-off distance of about five millimeters, an adjustment setting in the iCUE software would have been nice to have. The sensor felt similar to the 3310 optical sensor (my favorite entry-level sensor by the way), but the lift-off distance was too high for my taste.

The M55 RGB Pro is not the best in terms of build quality, but it certainly is not the worst either because of the Omron switches. The scroll wheel rattled a bit when shaking the mouse, but it was not noticeable during normal usage. The rubberized side grips were okay at best as they were not as soft as I would have liked. I thought the cable could have been improved as well because it felt rather stiff. Something like a soft rubberized cable, like on the SteelSeries Rival 300, would have been okay for a mouse in this price category.

While using the mouse, I found myself accidentally clicking the side buttons on the right side with my ring finger somewhat often. I did this a few times, but luckily, I have not assigned any functions to those two buttons yet. If the buttons were just slightly smaller in height, it would have prevented me from accidentally clicking on them. But then again, the M55 RGB Pro is an ambidextrous gaming mouse. This means it has to compromise a few design aspects to fit both left- and right-handed users. Once I become more familiar to this mouse, these two buttons on the right side can become very useful when assigned to different functions. 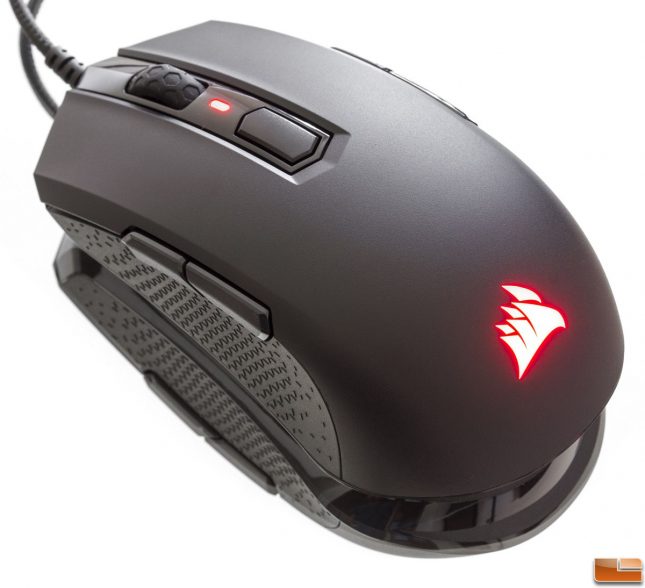 Priced at $39.99 shipped on Amazon at the time of this review, this is a fair asking price considering there are many other entry-level gaming mice in this price range. For $5 less, there is the Logitech G403 Prodigy wired gaming mouse at $34.99 shipped, which has the Pixart 3366 optical sensor and a right-handed body design. This makes it better suited for only right-handed players. The M55 RGB Pro is suitable for all types of grips, but I still find it difficult to recommend due to its high lift-off distance and overall build quality.

For less money can get you the Logitech G403 Prodigy, which already has one of the best optical sensors and better body construction. If you are a left-handed user looking for an inexpensive gaming mice or someone looking for versatility, the M55 RGB Pro does make sense. But for most right-handed users this one is a tough sell at $40.

Legit Bottom Line: The Corsair M55 RGB Pro provides good overall performance for any grip style, but falls short due to its value.