As expected, the Cherry MX Red switches performed well with both games and normal typing. For the most part, I did not notice much of a difference with the 8000Hz polling rate compared to the standard 1000Hz polling rate. It was very difficult to tell since 1000Hz (one millisecond) was quick enough already. Not that I am against the 8000Hz polling rate, but I am sure it will come in handy in some special occasions.

A polling rate like this would also be useful in a gaming mouse. This is because many competitive titles require an accurate mouse in order to aim, execute commands, and more. But also keep in mind, a high polling rate requires additional computing power. This can have a negative impact on system performance. Unfortunately, I do not possess the proper equipment to test the 8000Hz polling rate against the lower values.

It is very difficult for the average person to tell the difference between 1ms and 0.125ms without proper testing equipment. 1000Hz is 1ms response time on many standard gaming keyboards, and 8000Hz is 0.125ms on the K70 RGB TKL. So, if you are good at math, this means the AXON processor can transmit key inputs at eight times the speed of a conventional gaming keyboard. Although this is mathematically correct, it is humanly impossible to notice such a difference. 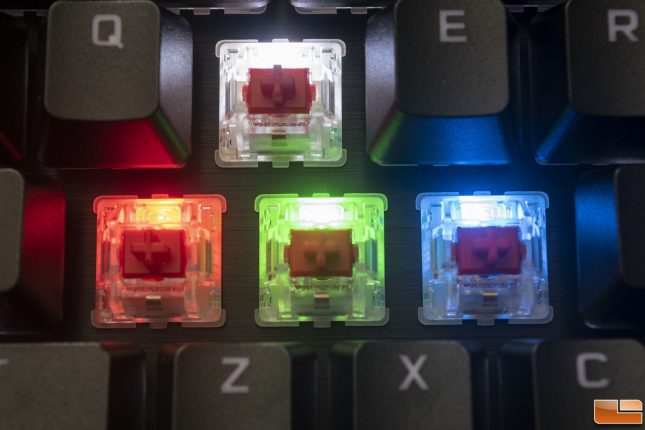 With tournament mode enabled, the keyboard switched to a static lighting effect to eliminate any distractions from lighting effects. By default, the keyboard lit up red, but I was able to change the color via iCUE. Basic functionality, like volume controls, lighting brightness, media keys, and Windows lock worked normally. The keyboard disabled custom actions and macros to prevent accidental activation. I guess another way to say this is to prevent players from cheating by using macros in competitive gaming.

RGB lighting was about what I would expect out of a Corsair gaming keyboard. The lighting method included LEDs underneath the clear plastic switch housing of each switch. Lighting was bright enough in a normally lit room and the color reproduction was mostly accurate. Whites had a slight purple tint to it, but I was able to correct that through the iCUE software.

With the swappable WASD keys, the keys all curve towards the center to allow better control. This lets the player know where the WASD keys are without misplacing their fingers. This is a nice touch that I would like to see more in other gaming keyboards. 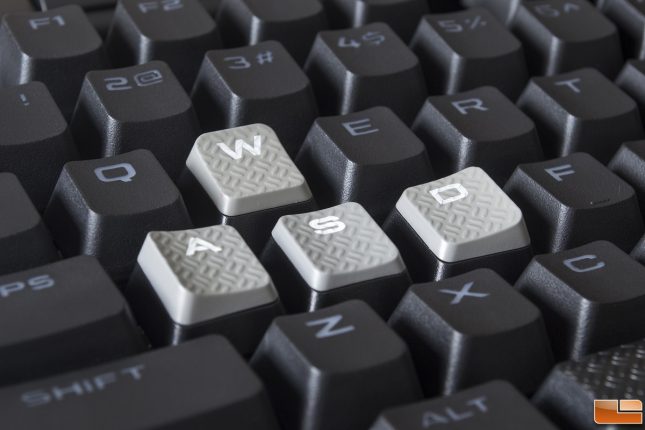 The same holds true for the rest of the swappable keycaps. This set of keycaps also curves towards the center for the QWER keys and DF keys. 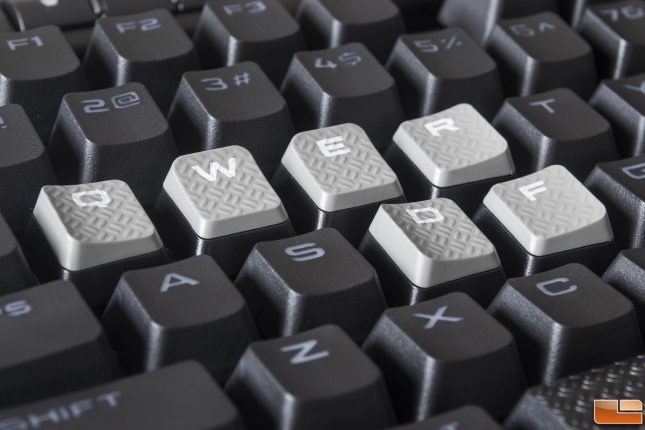 I like the fact Corsair has placed the model number in the bottom left corner of the keyboard. Like many of their recently released products, this design is very subtle without being too distracting. As a keyboard built for tournament and competitive gaming, this makes perfect sense. 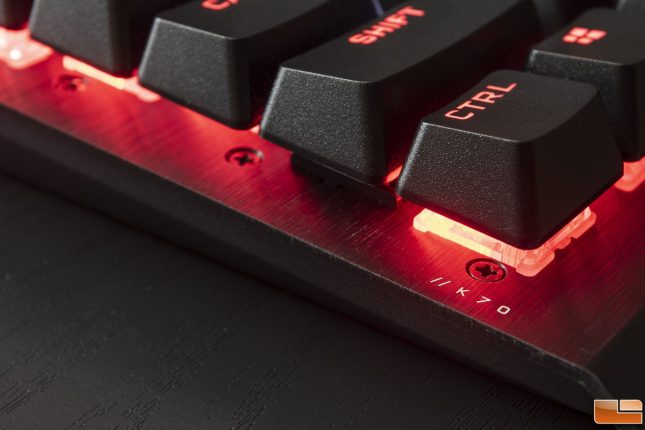 The overall performance of the K70 RGB TKL keyboard is quick and responsive with our sample with Cherry MX Red switches. Although I was unable to notice much of a difference under 8000Hz polling rate, I am sure there are some special occasions where polling rate matters. 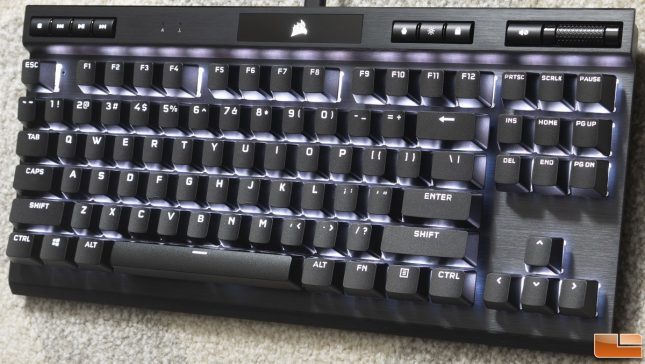 There is always room to improve the speed and responsiveness of gaming peripherals. Several years ago, Corsair worked with Cherry to develop the MX Speed switches. These switches have an actuation distance of just 1.2mm compared to the standard 2.0mm. This allows the player to execute a keystroke sooner than their opponent as the travel distance of the switch is shorter. Now, Corsair has gone up another step to improve on the polling rate of their recently launched keyboards, including the K100 series. Fun fact: the polling rate on the K70 RGB TKL is twice as fast as the flagship K100.

With a two-year warranty and priced at $139.99 MSRP, the Corsair K70 RGB TKL is certainly not the most affordable TKL gaming keyboard. But considering the 8000Hz polling rate, choices between Cherry MX Red/Speed/Silent switches, and great software support via iCUE, this is a great little keyboard for both casual and competitive gamers who want the best possible advantages.