The only surprise the K70 RGB presented was the struggle figuring out how to customize the backlighting colors in the software. It’s time consuming to use despite Corsair’s obvious efforts at making it accessible. There are a number of menu options that need figuring out and combining those options to make ambitious light effects takes patience. For example, creating a custom rainbow wave lighting profile was unintuitive. The difficulty comes from making a number of interactions happen including spacing and then managing groups of keys, assigning the correct colors using a swatch and hexadecimal, and timing the sequence across those groups and colors. Making an expressive lighting profile is not something that can be done in a matter of minutes or even hours. It is for that reason the Corsair RGB customization forum has attracted many RGB owners. 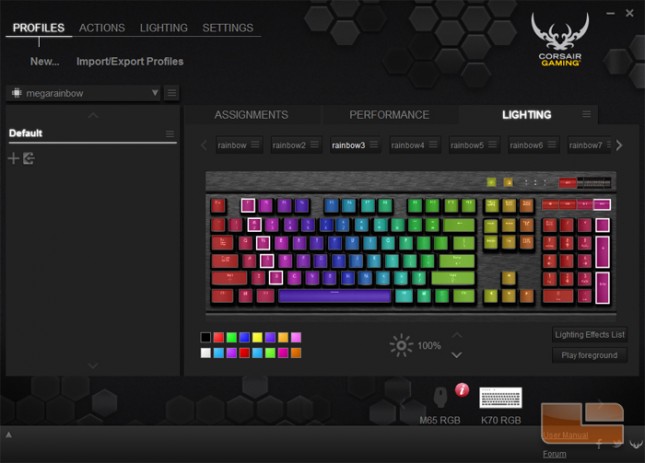 The rest of the keyboard is without surprises. The identical size and layout to the preceding Vengeance K70 left us with the same impressions as that keyboard during usage. The Cherry MX typing experience is great as a merit of the keyswitch design though that is inclusive of just about every Cherry MX mechanical keyboard. Since Corsair has made available three Cherry MX switch varieties available for the K70 RGB Red, Blue, and Brown buyers can choose the type of tactility for their usage and best optimize for gaming, typing, or both. The bezel-less edge and the keys floating above the backplate don’t influence the typing experience and are more for visual appeal by allowing the backlights to flood from underneath the keys and showcasing the polished black aluminum. The included textured wristrest gives an ergonomic adjustability option that blends in with the K70 aesthetic. Many of these observations can be extended to the K65 and K95 keyboards because they feature the same design principles on different layouts and sizes. 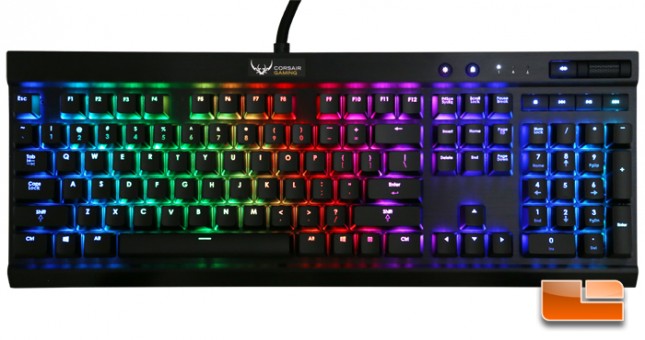 The original K70 was a very well received keyboard and stood apart from other mechanical keyboards by its aggressive crafted look. Corsair didn’t remove anything to make the K70 RGB, but adapted the design to deliver a much asked for feature since the usage of LED lit Cherry MX switches in gaming keyboards. The added onboard ARM processor and memory make the most of the new RGB feature from the Cherry MX RGB switches while additionally empowering per-key macro command customization. Expectedly, all this makes the K70 RGB more expensive than the 2013 K70 models at $169.99. Undoubtedly, the new Cherry MX RGB switches and more importantly, a robust software have allowed Corsair to be the first to make this dream come true even while a bunch of big competitors loom beyond the horizon.