The instruction booklet that comes with the Flash Padlock 2 is very concise and easy to follow. It outlines how to set the security codes and what the different combination of lights mean. Setting your personal PIN is as simple as holding the KEY button for 3 seconds, entering a PIN of 4-10 digits, press and hold the KEY button until both green & red LEDs are lit, re-enter the PIN and press the KEY button once more. Simple! 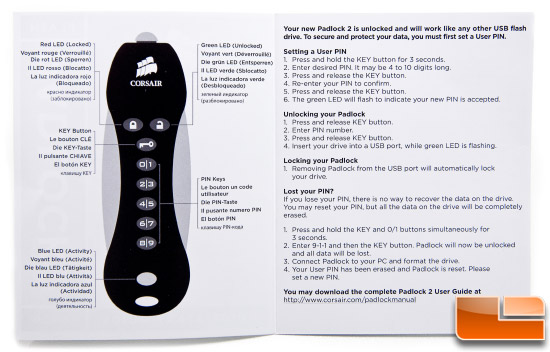 Unlocking the drive for use is even easier. Hit the KEY button, enter your PIN, hit the KEY button once more and the green LED will blink for 20 seconds. During this time, insert the drive into the USB 2.0 port of any PC. If you exceed this time, you’ll need to repeat the process as it will actively lock itself. Once plugged in, the drive will stay unlocked and once removed from the port it will actively lock itself again. You may change your PIN anytime you wish using a similar process to setting it up for the first time. After five unsuccessful PIN entry attempts, the drive will be disabled
for two minutes. Further attempts can be made after this lockout period. 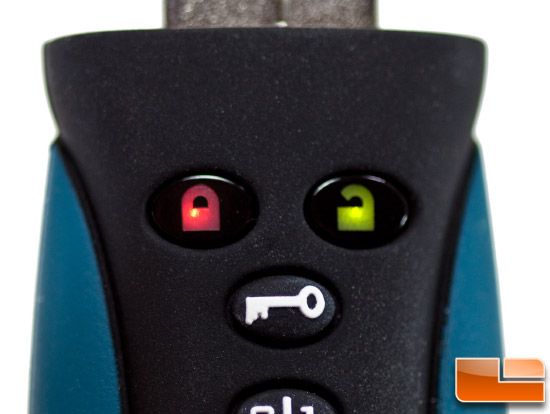 According to the reviewers guide we received from Corsair, the Padlock 2 has other features that weren’t found on the original drive. You can key specific sequences to disable the autolock feature which is nice if you are swapping the drive back and forth. You can also set a master PIN to override the user PIN should it be forgotten. This is handy if you are a parent with a child who is using the drive for school or an IT Administrator with users that employ the drives in a corporate environment. This is important feature because if the user PIN is forgotten and no master PIN is set, the only way to unlock the drive involves wiping all data. That said, please be careful with your PIN! 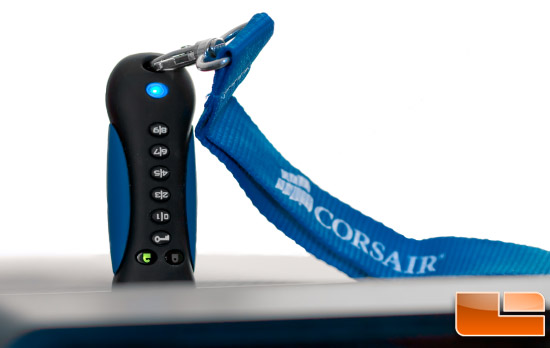 While in use, there’s a blue LED activity indicator as you would expect to find on a USB flash drive. As far as benchmarking goes, we limited it to just a few because the forte of this drive is its ability to protect your data, not set speed records. The original Flash Padlock was no champion in I/O bandwidth and there’s no reason to expect different with its successor; especially given the level of encryption being employed. 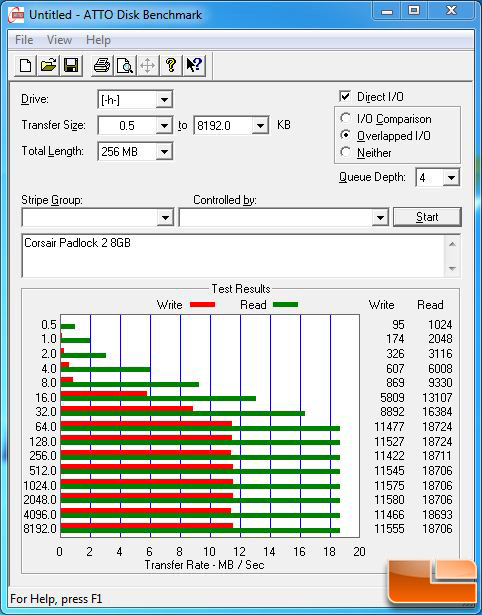 The ATTO benchmark has been around for quite some time and is one of the most widely used for measuring drive performance. The benchmark shows the write speeds surprisingly good at over 11MB/s which is nearly a 35% increase over the original. The reads are more in line with the performance we saw with the first Padlock which is just under 19MB/s. 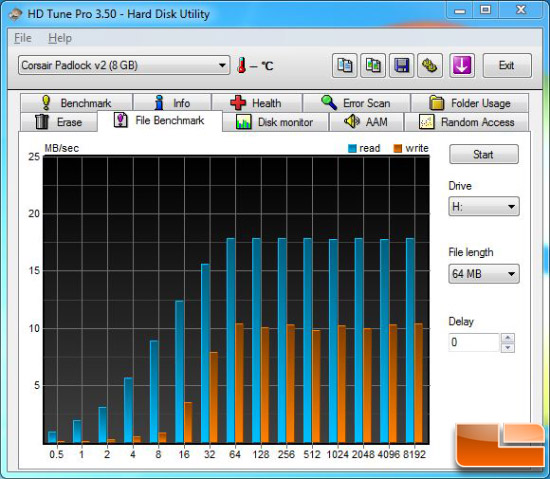 HD Tune Pro gives us more or less the same performance picture. Again, no speed demon but still ample for most anything you will need a on a secure drive.