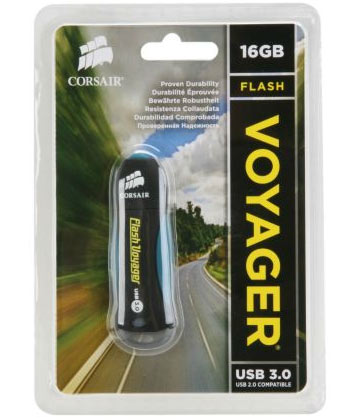 Corsair officially launched the companies first generation USB 3.0 Flash drives on May 19th, 2011 and more recently on September 9th, 2011 they announced the launch of their second generation USB 3.0 Flash drives. Legit Reviews got our hands on one of these new ‘2nd generation’ Flash Voyager 3.0 16GB drives and just had to run some performance tests on it to see how these new drives perform!

In the updated series Corsair currently offers an 8GB and a 16GB drive. You can tell that is is a second generation drive as the second generation drives have the letter ‘S’ at the end of the part number before listing the capacity. The newly updated drives have higher performance than the previous generation drives on both read and write performance! The drive performance changes between generations are due to component change. The reason that the 16GB drives perform better than the 8GB drives is due to the USB 3.0 controller and density of the MLC NAND Flash. Usually with USB and Solid-State Drives the performance improves as the capacity increases, but that isn’t always the case. For this review we will be looking at the CMFVY3S-16GB. 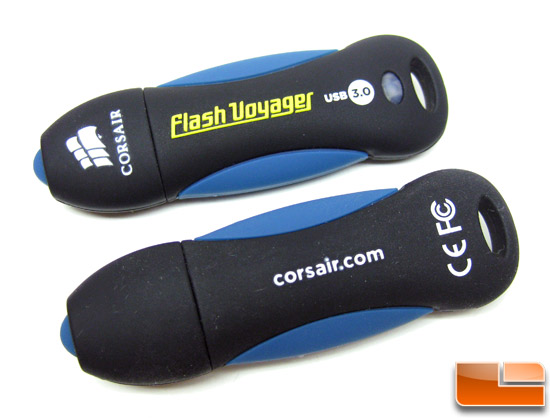 Corsair’s been using the same looking proprietary all-rubber housing for many years, but that is okay as it has been found to be durable and water-resistant. The Corsair Flash Voyager 3.0 features a removable cap and a hole on the bottom of the casing to secure a lanyard to. The Corsair Flash Voyager 3.0 drives are rather large compared to other brands, but they have actually decreased in size compared to the original Flash Voyager 2.0 drives that came out over five years ago. The measurements on this drive is 73mm x 22mm or 2.87″ x 0.87″ for length and width. The Flash Voyager was designed for ergonomics, but doesn’t look bad at all. 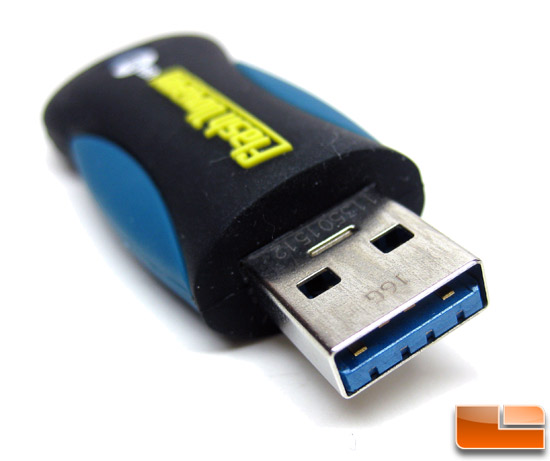 Taking the cap off you can see the SuperSpeed USB 3.0 type A connector. USB 3.0 is clearly the future and most all desktops and notebooks that are in stores today feature at least one or two of these ports on them. SuperSpeed USB 3.0 has a 5 Gbps signaling rate offering 10x performance increase over Hi-Speed USB 2.0. This is why you want a USB 3.0 Flash drive as they have the ability to go faster than USB 2.0 devices. Notice we said ability as it all depends on what components are being used inside. Notice that the capacity is laser etched into the metal housing on the USB connector to clearly show what capacity the drive is.