Welcome to the final day of our Computex 2007 coverage being brought to you from Taipei, Taiwan. This is the 27th year of the conference and by the looks of the crowd and the number of industry partners, it is easy to see how this conference is the world’s second largest IT show to CebIT.  Last year, there was over 130,000 visitors and officials expect this year’s crowd to be even larger!  Computex has been really busy this year, so our coverage today has been cut a bit short due to time constraints as we are leaving for China tomorrow.  Be sure to check out our day one coverage of ECS, HIS, MSI, Kingston, CoolIT, Enermax and Thermalright and Gigabyte, PC Power & Cooling, OCZ Technology, Super Talent and Antec in our previous two articles.  Today, we will wrap-up our coverage of Computex 2007 by showing you what ASUS, Thermaltake and VIA had on display. 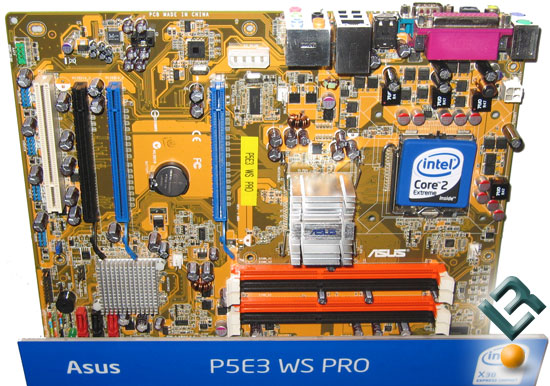 ASUS was showing off their Intel X38 Express-based workstation board at Computex 2007. The upcoming ASUS P5E3 WS Pro motherboard pairs the X38 Express with the ICH9R south bridge. The board supports dual-channel DDR3-1333 memory and there doesn’t seem to be plans for ASUS to release a DDR2 version of the same board. ASUS went with a basic orange PCB on the P5E3 WS Professional as it was aimed at the work station market and not at enthusiasts. 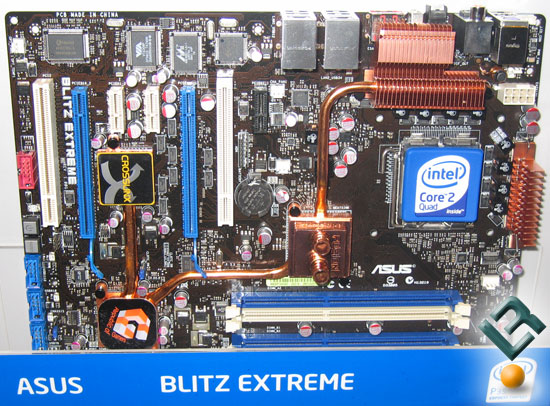 Th ASUS Blitz Extreme motherboard was by far one of the most exciting motherboards that was on display here at Computex. This motherboard makes the Striker and Commando look like weak sauce, and as a result will likely cost more than both of those motherboards. An example of why the price is going up is that instead of including the pair of hexadecimal LED displays for post codes they are now providing a small LCD display to tell you exactly what is going on. The board is also loaded with color coded LED’s to let you know if all your voltages are in check. The northbridge heat pipe cooler supports water cooling right out of the box for those that want to use it, which means that this board will be a great overclocker right out of the box thanks to the chipset cooling and the Intel P35 Express chipset. The three PCIe slots feature ‘Crosslink, which allows the 16 PCI Express lanes to be spread across two x8 PCIe slots rather than having to run two x16 slots at x16 and x4. This board is jam packed with enthusiast features and for those than can afford it will be an awesome board from the looks of things. 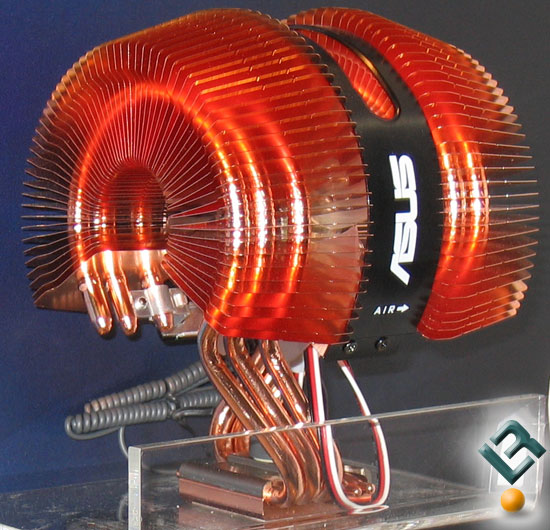 The ASUS Silent Knight CPU cooler goes to show that a heat sink can look like a work of art thanks to its use of Copper. The Silent Knight has six heat pipes and supports both AMD and Intel processors. It has been available on the market now for a number of months now and while it’s not ‘new’ it still looks cool (no pun intended). 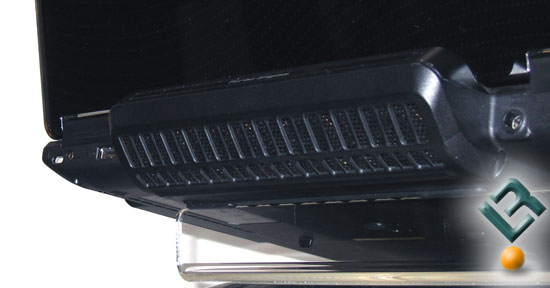 ASUS also had some really interesting stuff on the mobile side as they were showing off thier C90 notebook that features CPU overclocking thanks to the Turbo Engine.  ASUS has managed to add a bigger and better heat pipe cooling solution on the C90 notebook by adding the Turbo Engine to the rear of the chassis like shown above.  This means that the CPU can run cooler and therefore be overclocked safely now. 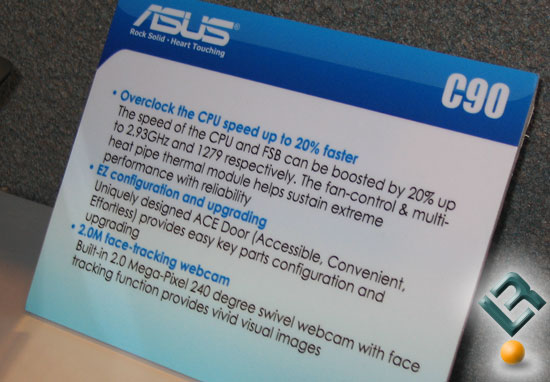 ASUS is claiming that they can increased the CPU and FSB by ~20% thanks to the Turbo Engine cooling method, which is impressive for a notebook.  ASUS said an Intel Core 2 Duo 1066MHz processor could be overclocked to 1279MHz without worrying about it as long as the overall clock frequency is below 2.93GHz. Along with overclocking, the C90 will be the first fully upgradeable notebook on the market. The C90 will also be the first to include HDMI 1.3 and an ESATA port. This is a very impressive notebook model that has us wanting to get our hands on one! 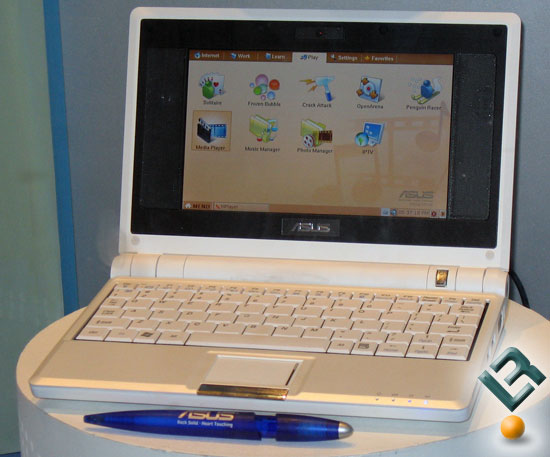 Asus has also been working on mainstream mobile products and has developed a small, inexpensive laptop named the Eee PC 701. This notebook is small at just 8.9 inches wide, 6.5 inches deep, and 1.4 inches thick (22.5 cm by 165 cm by 35 mm) with a 7 inch screen. It will weigh just under 2 pounds (890 g). The PC will be fitted with 512MB of memory and use either a 4GB, 8GB, or 16GB flash drive for storage. it will also include built-in wireless along with an integrated webcam and microphone. The battery life will be around 3 hours and the price is estimated to be around $199 to $299 when it comes to market this summer.