A trio of Chinese astronauts successfully returned to earth on September 17. The return to earth ends the mission for the first crew aboard China’s Tianhe space station. The crew members include Commander Nie Haisheng, Liu Boming, and Tang Hongbo.

The capsule they were in touched down in the designated landing zone near Dongfeng in inner Mongolia. Touchdown happened at 1:34 AM Eastern on September 17. Chinese authorities confirmed that the main parachute to slow the capsule’s descent opened about 10 kilometers above the ground. 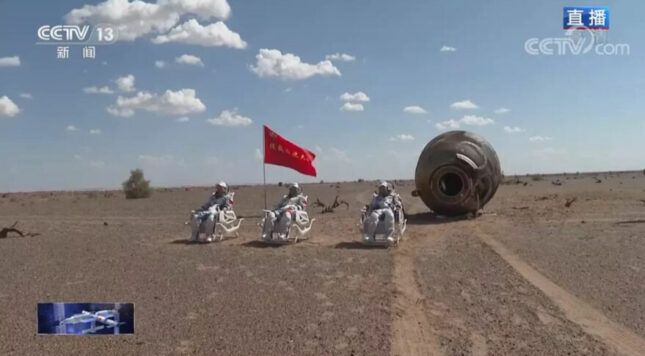 The capsule automatically jettisoned the protective heatshield about 5.5 kilometers above the ground. Authorities also confirmed that ground search teams quickly found the astronauts after their touchdown. The mission has been declared a complete success. It appears from the image above that the capsule may be lying on its side, but it’s unclear if that’s how it landed or if it was moved after landing.

The astronauts were aboard the space station for three months performing tasks that included verifying life-support systems worked and installing equipment for future missions. Astronauts on the mission also set a Chinese record for mission duration in space at 92 days.