Intel held their annual CES 2021 press conference this afternoon and we thought that we’d cover some of the topics that were discussed. Intel started that we live in a world where computing is pervasive and intelligence is distributed across every service from the cloud, to the network to the edge. And in this pervasive computing era, Intel believes that the PC is more essential than it’s ever been as a tool for work, education, and entertainment. 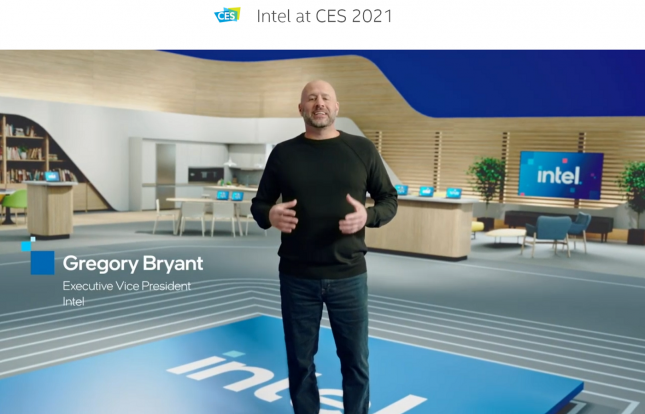 Intel remains focused on making the PC the best tool for people to stay connected and do the things that matter most of them. They showed this commitment by introducing four new families of processors with over 50 different models that range from entry level to premium offerings. 27 of the new CPUs have been built specifically for business, 6 new CPUs are for education, 12 are new high performance mobile CPUs and eight are new performance desktop CPUs. We just learned about these processor today, but Intel has already racked up more than 500 laptop and desktop design wins with them. All are said to be coming to market this calendar year! 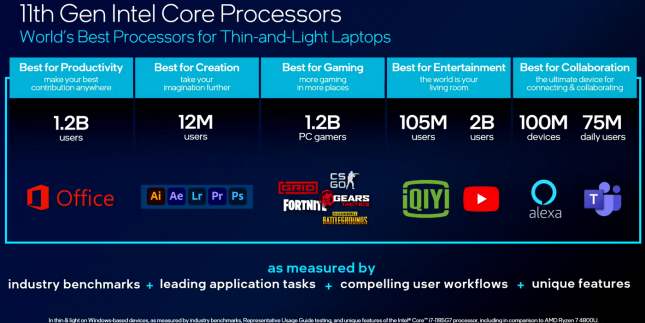 It seems Intel gained momentum in September with the launch of the new 11th Gen Intel Core mobile processors. Intel says delivering benchmark performance increases is only part of the picture as it is really about delivering performance that matters to people. Intel has been talking about improving performance on real world applications for a couple years now and that seems to be continuing here today. The slide above shows five areas that Intel believes that they deliver the best experience in for thin-and-light laptops. The highlighted Microsoft Office for productivity, Adobe for creation, a variety of games that are now playable on thin and light laptops, Youtube for entertainment, and for collaborating they highlighted Microsoft TeamViewer.

The next slide that Intel shared was how they are continuing to work with the industry and continue to enhance those experiences, and that performance after the CPU launch. Intel highlighted that when unplugged and on battery AMD powered laptops can see performance drops by up to 38% for productivity and up to 48% for for when for web browsing.

Intel also called out AMD in Adobe Scene Edit where they claim to be up to 1.3x faster than competitions Ryzen 7 4800U processor. Intel Xe graphics has some new software now that can enhance the gaming experience by capturing and streaming gameplay. This feature is located in the Intel graphics control panel. For those that watch movies on their PC you can get hardware accelerated Dolby Vision on the 11th Gen Intel processors. This being done on hardware translates to lowering the system power by 20% and that translates to better battery life. 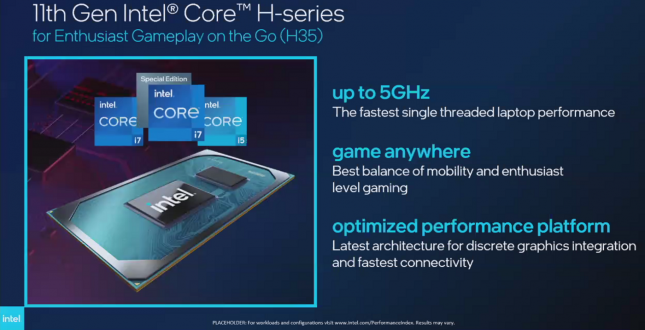 So, what is new for this year that would appeal to our sites audience? The new line of 11th Gen Intel Core H-series Mobile Processors should be of interest. The flagship model is the Intel Core i7-11375H Special Edition 4-core processor with up to 5 GHz Turbo clock speeds on 1-core. 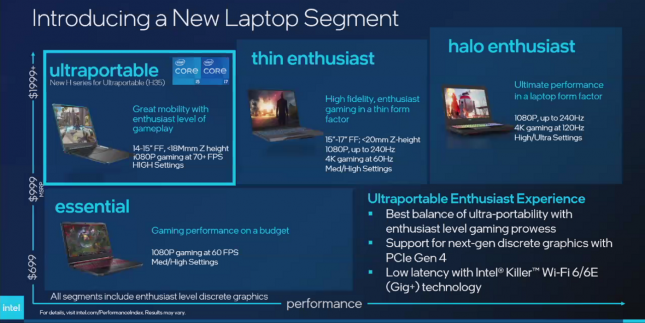 These H35 processors are specifically targeted for ultraportable gaming laptops and believe it or not, that is a brand new laptop segment according to Intel. 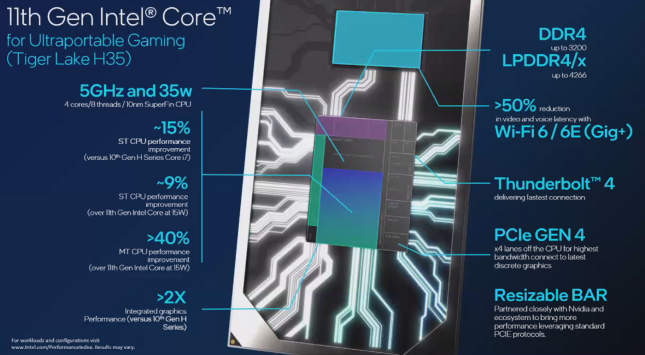 The 11th Gen Intel Core ‘Tiger Lake H35’ CPUs feature new PCIe Gen 4, WiFi 6/6E and Thunderbolt 4. They also support Resizable BAR straight out of the gate to ensure the best gaming experience. Intel says that they have over 40 designs from top manufacturing partners launching in the first half of 2021 for this segment. 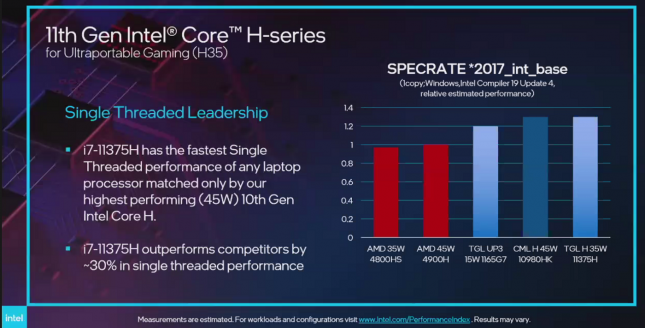 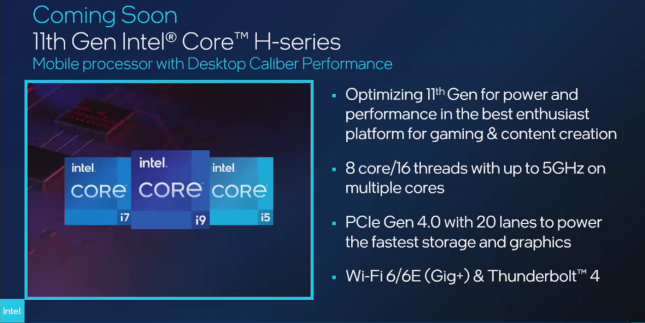 Intel also announced an 8-core processor that will start shipping later this quarter that will have clock speeds up to 5GHz, 20 lanes of PCIe Gen 4.0 architecture, and Intel Killer Wi-fi 6E (Gig+).

Intel also talked about their next-generation desktop processors and we know that gamers and enthusiasts are waiting for these coming to market this quarter. The 11th Gen Intel Core S-series desktop processors (Rocket Lake-S) brings 19% gen-over-gen instructions per cycle (IPC) improvement. The flagship model will be the Intel Core i9-11900K. 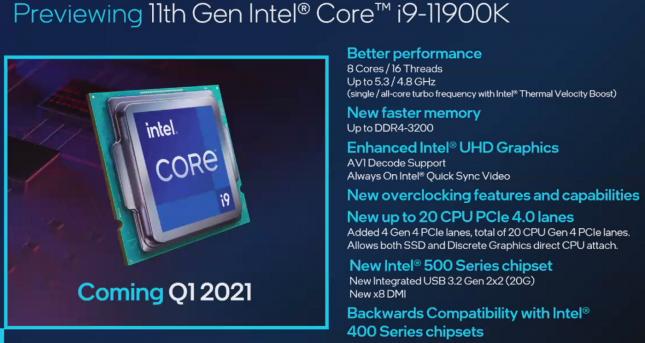 The Intel Core i9-11900K 8-core, 16-thread processor has an all-core turbo clock frequency of 4.8GHz with a single-core peak clock speed of 5.3GHz. It supports DDR4 3200MHz memory straight out of the box and for the first time has 20 PCIe 4.0 lanes hanging off the CPU. The Intel Core i9-11900K will work in the new Intel 500 series chipset that is also launching in Q1 2021 along with the existing Intel 400 series chipset ecosystem. You’ll need to update the BIOS/UEFI before, but that is a simple task in this day and age. Intel has also confirmed that the Intel 500 series has integrated USB 3.2 2×2 (20Gbps) support and will connect to the CPU with a brand new x8 Direct Media Interface (DMI). Intel has long used a x4 DMI, so this is a major change that will remove a bottleneck that has often been blamed at hindering platform performance. 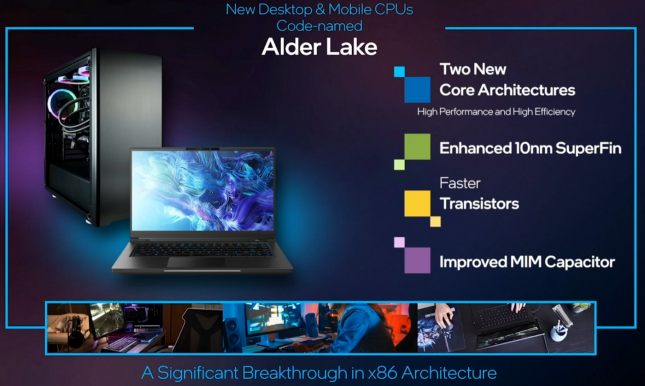 Lastly, Intel talked about Alder Lake their next-generation processor and even showed it running in a demo system. Intel says that Alder Lake will be released in second half of 2021 and will combine high-performance cores and high-efficiency cores into a single product. Alder Lake will also be Intels first processor built with 10nm SuperFin technology and seems like a very interesting part. 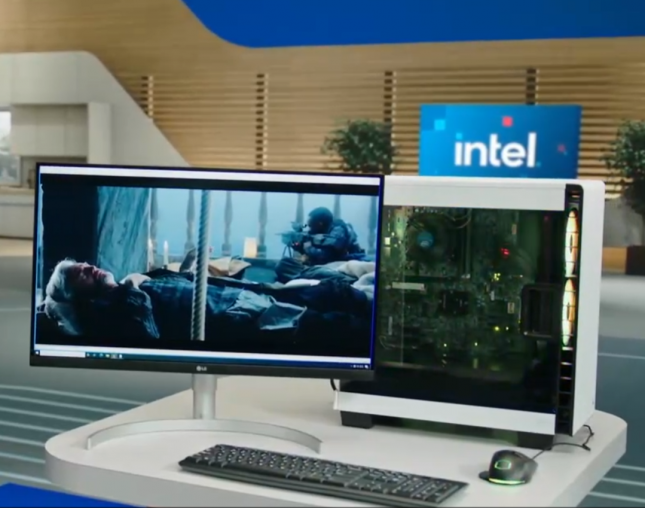 It looks like Intel will have a pretty busy year in 2021 and will have plenty of products rolling out to keep the tech press and enthusiasts occupied!