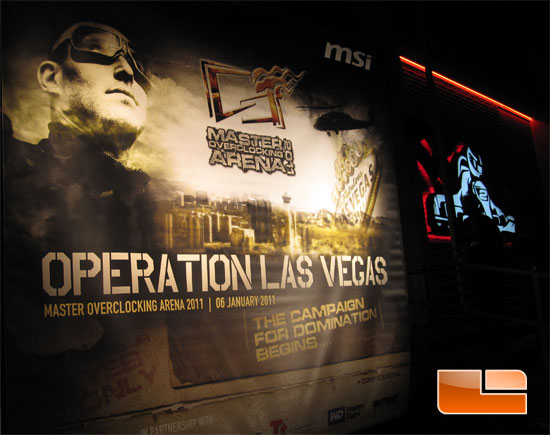 This week during CES 2011 Legit Reviews was fortunate enough to attend MSI’s Operation Las Vegas Master Overclocking Arena 2011. The overclocking event was held during CES 2011 and was held at Pole Position Raceway in Las Vegas Nevada. Contestants were chosen through an online competition were they had to have the top times in Super Pi 32m, as well as the top scores in FutureMarks new DirectX 11 Benchmark 3DMark 11. Once the teams began competition the Liquid Nitrogen was flowing freely and frequently. The overclocking teams were using systems based on MSI’s Big Bang XPower with an Intel Core I7 980X Hex Core Processor and a MSI NVIDIA GeForce GTX 580! 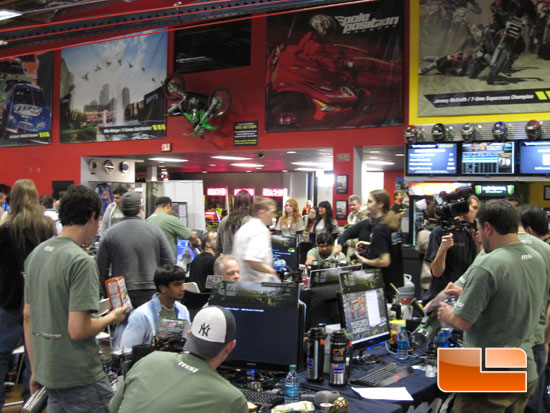 While the Overclocking teams were busy pushing the Intel Core I7 980X processohttp://legitreviews.com/spaw/plugins/core/lib/theme/spaw2/img/tb_html_off.gifrs to the limits, the media were able to take Go-Karts out for a spin and push our driving skills to the test during MSI’s Masters of Overclocking Arena 2011! The Go-Karts were fun but nowhere near as entertaining as watching the teams of overclockers push their systems to extreme speeds! 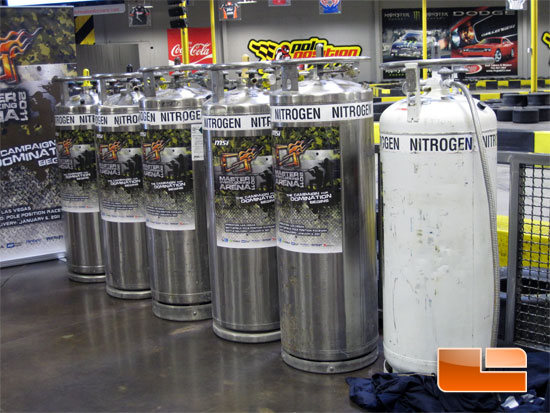 The first obstacle that the teams of overclockers had to overcome was Super Pi. Super Pi is a great benchmark that will calculate up to the first 32 million digits of Pi. Super Pi has become a standard benchmark in the world of overclocking because it scales well with the CPU frequency. Each team had approximately three hours to complete the fastest run of Super Pi 32 million that they could accomplish. This leg of the competition would account for 40% of the final score to determine the overall victor. As the teams of overclockers pushed the limits of the Intel Core I7 980X up, the time it took the systems to complete the first 32 million digits of Pi went down. When all was said and done with this leg of the competition, Team Over the Edge, which was comprised of Patch and Dentlord from the United States of America were the top dogs in the first of the two challenges. Team Over the Edge was able to complete 32 million digits of Pi in the short time of 6 minutes and 26.257 seconds! This was five and a half seconds faster than the next team, Team OC Alliance. 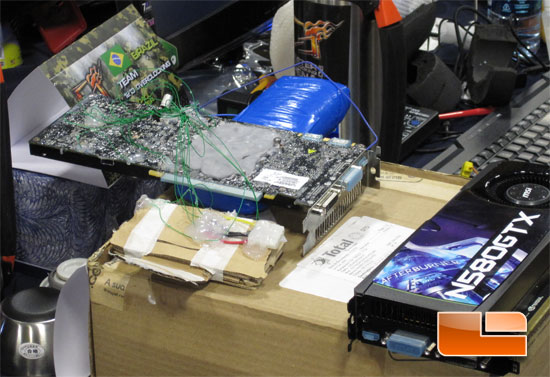 Once the victors were declared in Super Pi, they moved on to the next leg which included FutureMark 3DMark 11. Each of the teams had to complete a run of 3DMark 11 on the performance preset, and again the team with the best performance wins. During this leg of the competition the teams were dumping Liquid Nitrogen on to both the Intel Core I7 980X as well as the MSI NVIDIA GeForce GTX 580. Throughout the FutureMark 3DMark 11 competition new world records were being set one after another, it was quite impressive to see, and a testament to the quality of the MSI products being used. After three hours of benchmarking team OC Alliance took the cake with a new world record of 9213 3DMarks! 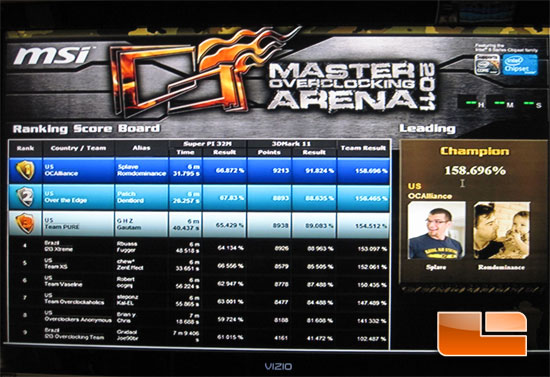 The screens are a bit tough to read, but the overall victor was team OC Alliance followed closely by the US team Over the Edge, and the US Team Pure!

The victorious team OC Alliance took home a prize of $1500.00 with second place taking home $1000 and third bringing in $500! Overall not bad for a days work for the Victors! Congratulations to the winners once again, and thanks to MSI for hosting a great event!