Highlights of the Showfloor

Between the back to back meetings, press events and parties, the LR crew actually had some time to visit the show-floor at the 2009 International CES! You have seen some of our coverage from the floor already, but I also wanted to show you some of the products that LR traditionally does not cover. These products just happened to catch my eye, so I grabbed some pictures and video! 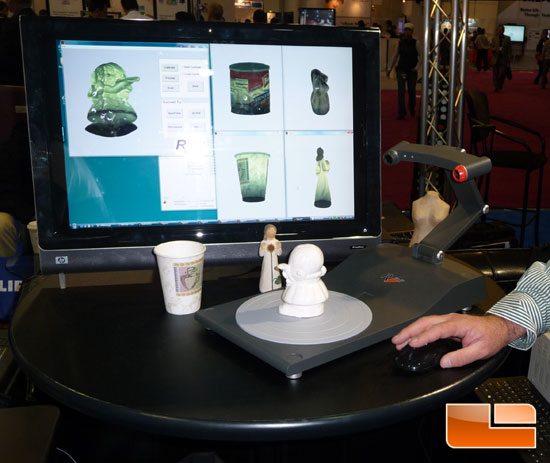 Here Real-View 3D demonstrated their entry level 3D scanner, the RealView 360 3D. When talking to their marketing reps, Real-View is gearing this particular product to the hard-core E-Bay businesses to be able to upload an animated GIF that shows a rotating 3D image of the product they are selling! Pretty cool product that I’m sure will also be fun to just show off to your friends! This product is set to be released for under $500.

iRobot also had an impressive booth showing off their full line of Roomba vacuum cleaning robots. While we all know and love the Roomba vacuums, iRobot was also showcasing their new Looj gutter cleaning robot to be released in Spring 2009 starting at just $129. The Looj allows you to climb a latter once, put the Looj in the gutter, use the removable handle as a remote control, and watch the Looj do the hard work for you. Once the robot gets to the end of the gutter, you put it in reverse and it will come back to you!

Ozaki had a nice setup of their iMini Pets that can be used as a radio, alarm clock, and iPod speakers. You can dock your iPod or use any other MP3 device, play a song and the puppet will sing the song for you. They were showing lions, pandas, frogs, bears, dogs and even had one of President-elect Obama!

To round up the coverage of off-beat tech-toys, I had to show off the 5 foot tall standing or 2 foot bending, 30 pound QA telepresence robot from Anybots! This is a way you can be two places at once by controlling the QA robot from any PC over the internet. You can move, see, be seen, talk and listen through the QA! The QA moves around on two wheels at a max speed of 6 miles/hour, has a 4-6 hour rechargeable battery life, 802.11g or 3G cellular connectivity, two 5mp cameras with IR illuminators, 7″ LCD on its chest, green laser pointer, LIDAR navigation and PC or Mac client software. Anybots is currently marketing the QA to manufacturing facilities as an alternative security system to be able to patrol a facility without having to be there. The QA is currently only being built per order under a hefty price tag of around $30,000! However, Anybots hopes to soon produce in mass quantities in order to significantly lower that price.

I hope you have enjoyed our coverage of the 2009 International CES! Sound-off in our forums to comment on any of these fun gadgets!